NUR-SULTAN – Kazakh Mazhilis (lower house of Parliament) Chair Nurlan Nigmatulin summed up July 5 the work of the deputies in the fourth session of the sixth convocation at the joint meeting of chambers of Parliament in the capital. The Parliament adopted social and economic legislation and the national budget for 2019-2021. 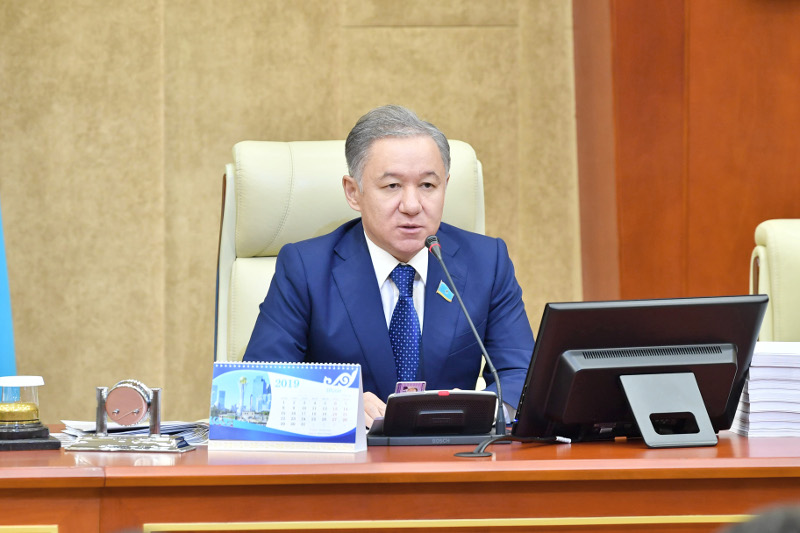 Nigmatulin stressed that during the work of the session, the deputies focused primarily on the strategic guidelines formulated by First Kazakh President Nursultan Nazarbayev at the opening session in September last year and his state-of-the-nation address to the people of Kazakhstan.

The initiative of Kazakh President Kassym-Jomart Tokayev on state support of the socially vulnerable population gave an additional impetus to the legislative activity, he said.

Among the economic laws reviewed and adopted for the implementation of these large-scale initiatives are laws on economic issues such as on natural monopolies, on standardisation, on special economic and industrial zones and on transport issues.

Among social legislations are laws on healthcare, circulation of medicines and medical devices, regarding employment and amendments on housing relations.

The chair stressed that the most important laws adopted during the session were the national budget for 2019-2021, which primarily focuses on social tasks’ implementation.

The redistribution of the expenditure side of the budget was carried out in the following areas. The Parliament allocated 89.2 billion tenge (US$232.19 million) for implementation of the presidential decree on measures to reduce the debt burden of citizens of Kazakhstan, who find themselves in a difficult life situation, 138.6 billion tenge (US$360.77 million) for the expansion of existing measures to provide employment and support for low-income, large families and young people, 72.2 billion tenge (US$187.93 million) to increase the reserve of the government, part of which will be sent to eliminate consequences of an emergency situation in Arys.

Along with the adoption of budgetary amendments, Mazhilis deputies started work on new legislation, including an agreement on cooperation of the Commonwealth Independent States in combating information technology crimes, the Kazakhstan-Ukraine treaty on extradition, amendments to the agreement between Kazakhstan and Kyrgyzstan on border crossing points, amendments to the convention on information access and public participation in the decision-making process on matters relating to the environment.

The Chairman of the Majilis noted the law on the transfer of functions of central and local executive bodies to a competitive environment, which expands the ability of citizens to participate in the decision-making process through the development of a self-government system.

“Every law gives impetus to the development of our country and the improvement of the quality of life of the population. And most importantly, every adopted law is designed to support and protect all citizens,” said Nigmatulin.

He also noted the deputies not only work with government bills, but also exercise their right of legislative initiative. In particular, the deputies initiated laws on the activities of organisations performing the functions of protecting the rights of children, as well as on the civil service and combating corruption.

The deputies are working on bills initiated by deputies of Parliament, such as on issues of enforcement proceedings and the provision of public services.

According to Nigmatulin, deputies of both houses of Parliament sent 319 deputy requests to the Government over the past session. The Parliament received approximately 7,000 appeals from citizens during the session, all of which were considered in accordance with the legislation. The deputies visited more than 2,000 settlements.

The chair also mentioned other issues to be solved. Among them are the lack of effectiveness in planning the legislative work of the government. He said that the bills received from the government do not meet the high requirements. He also drew attention to the late submission of conclusions by the government to the amendments of the deputies.

After the session is closed, parliamentarians will travel to the regions to meet with the public.

“The session ends, but there are trips to the regions to meet with the population. The proposals that will be made during these meetings, we should take into account in our further legislative work. Such meetings are an important part of our work. Feedback from the population is very important for us,” said Nigmatulin.