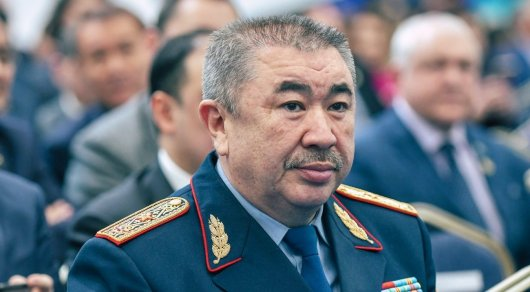 The law enforcement agencies also launched two criminal cases against organisers who are alleged to have called for and funded the protests.

“Loudspeakers, paint cans and smoke bombs that they tried (planned) to use July 6 were seized from them, but because of the fact that we applied preventive measures, these persons were detained… In the future, we will (brief the public on) the course of the investigation once again,” said the minister.

Turgumbayev said that during the arrests the police did not use special equipment and spoke to the public first.

“Everyone saw (that) no special or technical equipment was used, but at the same time people who violated the public order, they destabilised the situation. They tried to block the movement of public transport in Almaty on Abai Avenue. We have a video. In Nur-Sultan, also, on the Republic Avenue. Thereby they prevented citizens from normal rest and holding festive events. Therefore, these individuals were detained and brought to administrative responsibility,” he said.

He also said the Office the Prosecutor General warned about the illegality of unauthorised protests and urged people not to disturb public order.

“Despite repeated warnings by the Office of the Prosecutor General, some citizens succumbed to the provocative appeals of a banned extremist organisation. Some of them began to commit unlawful actions against law enforcement officers, creating a threat to the calmness and security of other citizens. In this regard, the internal affairs bodies have taken measures envisaged by law to curb violations of public order,” reported the ministry’s press service.