By Aidana Yergaliyeva in Nation on 25 July 2019

NUR-SULTAN – The Kazakh government adopted July 23 an action plan to complete the instructions given by Kazakh President Kassym-Jomart Tokayev at a July 15 extended government meeting. 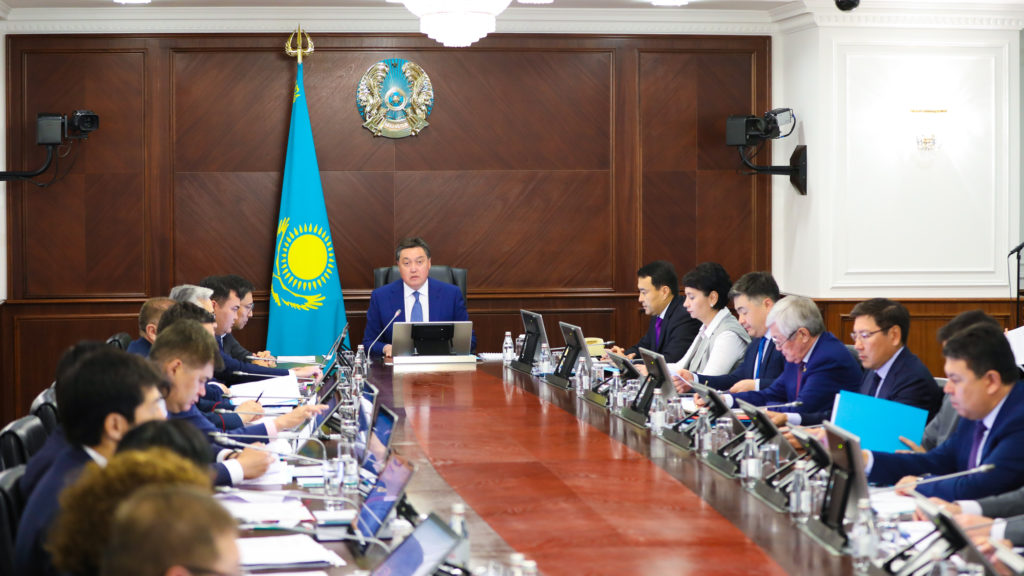 The instructions reflect the promises made during Tokayev’s presidential campaign to improve social welfare, raise salaries and expand communication between the government and civil society, among other issues.

The government’s project office will oversee implementation of the instructions.

According to Deputy Prime Minister Gulshara Abdykalikova, the government proposes four measures to ensure control over targeted social assistance. First, there will be automated control over the compulsory signing of a contract to receive targeted social assistance. Second, the authorities will assess family well-being through social maps. Third, monitoring groups will visits the regions. Fourth, the government will organise hearings of regional commissions to eliminate violations.

The authorities of Aktobe introduced July 1 a social services resource to improve the support system for people with disabilities, she noted. Starting from August, the website will offer technical rehabilitation equipment directly from providers. The rest of the country would be able to use it Jan. 1.

“To implement these tasks, the action plan is being developed to prevent conflicts in enterprises attracting foreign labour. Inspections to several enterprises have been scheduled. Following the results, comprehensive proposals on improvement of legislative acts will be developed,” said Abdykalikova.

Tokayev has also instructed to adopt the law On the Status of the Teacher before the end of this year. It provides material and non-material incentives for teachers and a set of measures to increase the prestige of the teacher and protect teacher rights, said Abdykalikova.

Another pressing issue is the elimination of three-shift schools and schools whose premises are in emergency conditions. To address this, the government proposes a new method to finance construction and repair works of school buildings from 2020. The funds to the regions will be distributed depending on per capita rate and the number of school age children. In addition, schools will be built using public-private partnerships.

The action plan also considers “changing the timing of competitions for grant and programme-targeted funding, updating the composition of national scientific councils, increasing the requirements for their members, making changes to the rules of the state scientific and technical expertise,” said the deputy prime minister. The action plan also will continue efforts to reform school and vocational education.

All of these activities will be reflected in the draft State Programme for the Development of Education and Science for 2020-2025.

The 2020-2025 State Programme for the Development of Healthcare provides for a set of measures to increase medical workers’ salaries.

The government will also work to improve the perception of healthcare work as a profession and working conditions in the draft of the new code On the Health of the People and the Healthcare System. The draft code will be submitted to the parliament in September.

“In order to study the qualitative implementation of the Compulsory Social Health Insurance system, in August, an audit on the regions’ readiness to introduce the insurance will be conducted. The questions of fully updating the status, citizens’ attachment to polyclinics and technical readiness of medical organisations will be studied,” said Abdykalikova.

In preparation for the insurance, a pilot project will begin Sept. 1 in the Karaganda Region. The project will test the provision of some medical services from the insurance package, status identification of insured persons and separate accounting of funds.

Transition to “a state that listens”

According to the deputy prime minister, there are three main problems in informing the public: first, inefficient use of communication channels; second, the formal approach of government agencies to highlighting their work; and third, insufficient involvement of the population in decision-making processes.

The government proposes to inform the public through online tools such as direct call-in shows with the heads of state bodies, social media accounts, online advisor and virtual reception of the Kazakh President.