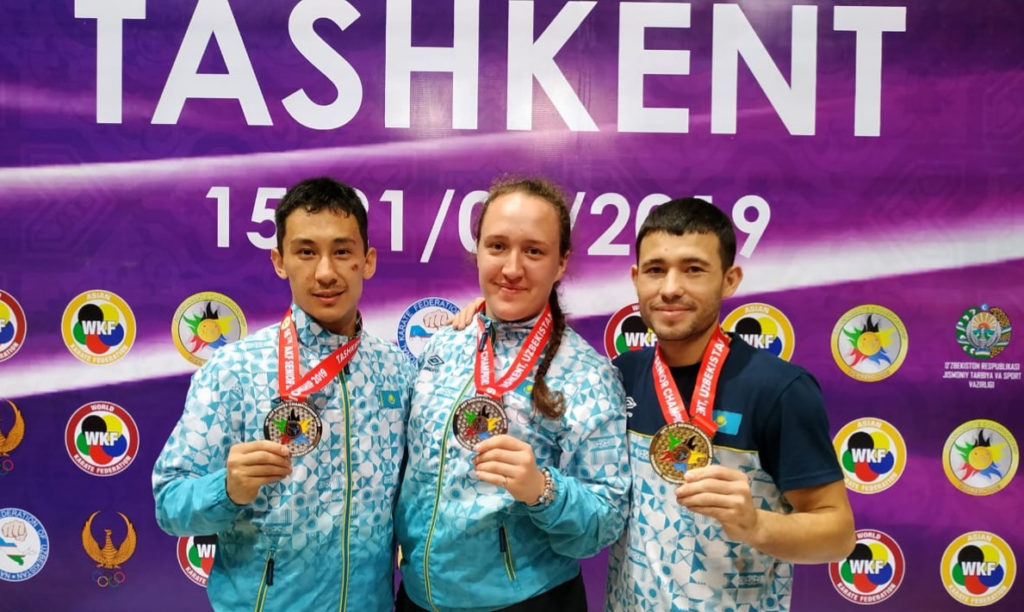 “The results of the latest Asian Championship, compared with last year, turned out to be more than successful for us, especially considering the fact that the championship is licensed and its results may affect the Olympic rankings,” said head coach Zhastalap Sanauov.

Aktauov won in the men’s under 55 kilogramme category. To advance to the finals, he fought athletes from Cambodia, Iran and Malaysia, then faced Alshari Abdulla from Saudi Arabia. Aktauov and Abdulla previously met in the finals of the 2014 Asian Games, with Aktauov also winning gold that year.

Amirali competed in the men’s under 67 kilogramme category, where he also won silver at the 2018 Asian Games. This year, Amirali fought competitors from Bahrain, Saudi Arabia, Thailand and Jordan, winning all the rounds. He was defeated in the finals by Japan’s Hiroto Shinohara, the 2014 Asia Games champion.

Berultseva, who last year won the world junior athlete karate championship, gained her medal in the women’s over 68 kilogramme category. She won rounds against competitors from Tajikistan, Taiwan and China. In the finals, she fought Iranian Hammideh Abbasali, who previously medalled at the senior world championship. Abbasali defeated Berultseva 4-2.

Despite the overall success of the Kazakh team, leader Darkhan Asadilov, who was voted Kazakhstan’s best athlete in June, was unable to secure any medals, noted Sanauov.

“It’s a pity, of course, that our leader Darkhan Asadilov was left without an award, but even this moment cannot influence the situation. Darkhan will continue to remain at the head of the Olympic list at least until the next sporting event that is to be held in September – the Premier League in Tokyo – and then we’ll see,” he said.