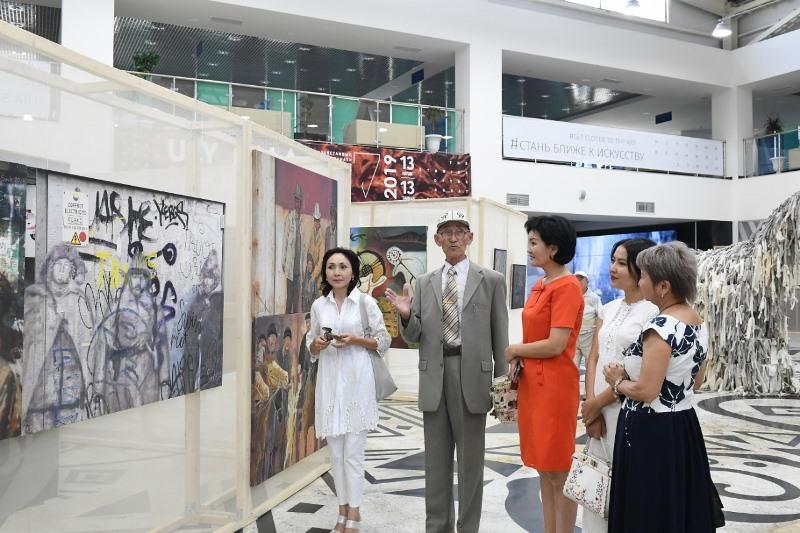 “The idea of the exhibition was inspired by the ‘Seven Facets of the Great Steppe’ article. What is the world’s perception of the peculiarities of the people living in the arid zone in the centre of the Eurasian continent for centuries? What is the difference between the Asian continental feeling and the European sea sensation? What values did horse riding people bring to the world bank of human culture?” said organiser Dinara Amangeldina.

Among the objects are Dusenbina’s “Pillows,” a set of airbags depicting batyrs and other animals. The display, stretching from floor to ceiling, focuses on the problem of mass deaths of wildlife. “Grandmother’s Eyes,” by Akhmedyarov, is a sequence of eye-shaped cauldrons extended along several rows. It expresses the artist’s memories of visiting his grandmothers in the village and their excitement and care each time they saw him.

The exhibition also features lectures and master classes. It will continue through Aug. 13.

Great Steppe History was featured earlier in two other cities and will be travelling to additional regions. It is significant as one of the first exhibitions of its scale to reach the country’s more remote areas. The exhibit was organised by the Almaty Region Akimat (administration) as part of Kazakh First President Nursultan Nazarbayev’s Seven Facets of the Great Steppe programme.