NUR-SULTAN – Incumbent President of Kazakhstan Kassym-Jomart Tokayev is expected to win the June 9 presidential election receiving the support of 70.13 per cent of the voters who cast their ballots, results of a nation-wide exit poll suggested. 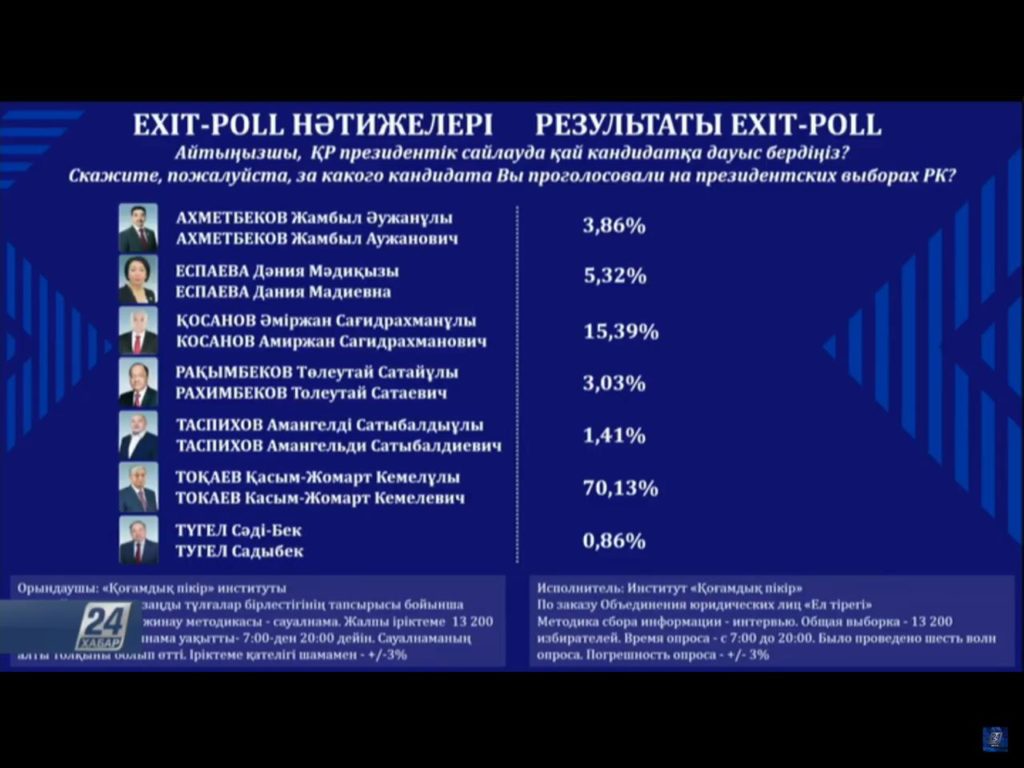 The results, released immediately after midnight of June 10, suggest that Tokayev won a clear victory over six other contenders.

According to the exit poll, conducted by the Qogamdyk Pikiri (Public Opinion) Institute, Amirzhan Kossanov of the Ult Tagdyry United National Patriotic Movement who campaigned as the opposition candidate, came in second with 15.39 per cent.

The exit poll showed that Daniya Yespayeva of the Ak Zhol Democratic Party won 5.32 per cent, Zhambyl Akhmetbekov of the Communist People’s Party of Kazakhstan – 3.86 per cent, Toleutai Rakhimbekov of the Auyl (Village) Kazakhstan’s social democratic party – 3.03 per cent, Amangeldy Taspikhov of the Kazakh Trade Unions Federation –  1.41 per cent, while Sadibek Tugel of the Uly Dala Kyrandary National Public Association gathered only 0.86 percent.

Ainur Mazhitova, chair of the board of Qogamdyk Pikiri Institute, announced the results at a briefing in the capital. She said 350 interviewers questioned a total of 13,200 voters at 325 polling stations, including 97 in regional centres as well as in Nur-Sultan, Almaty and Shymkent; 94 in small towns, and 143 in rural districts.  The margin of error was said to be three percent.

“This day will go into our history… This was about the competition of election platforms,” Tokayev told his supporters immediately upon hearing the results of the exit poll.

Overall, there were 9,968 polling stations across Kazakhstan and at the country’s foreign missions abroad, where 11,947,995 voters were registered to vote. The voter turnout, according to the official data of the Central Election Commission (CEC), was 77 per cent.

A CEC statement on the preliminary results of the election is expected to be released in the morning of June 10. According to the law, the final results are to be released within 10 days of election day.