Please help women and children who were deceived by ISIS!

I am Aida. I am from Kazakhstan. I am 25 years old and I have witnessed war, hunger and cold. Before that, I lived a normal life in Kazakhstan, graduated from high school, used to play sports and dance and dreamed of becoming a journalist. 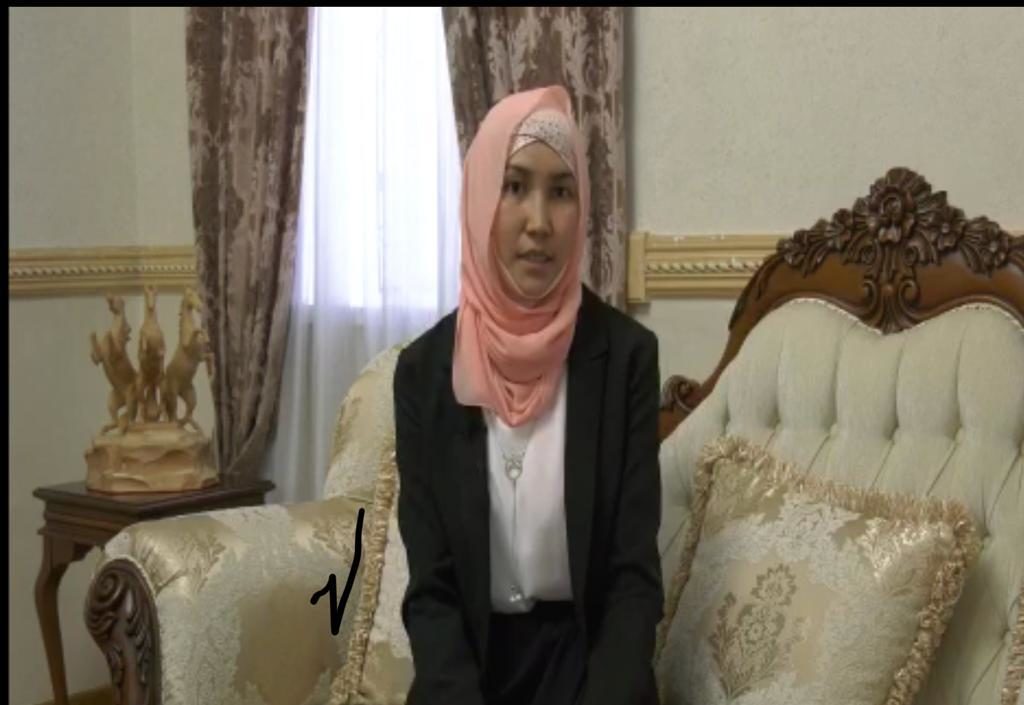 Aida Sarina. This video still is taken from her testimony prepared for a UN event in New York.

Everything changed when in the summer of 2015 I, my husband and my son went to Istanbul. My husband suggested we spend a vacation in Turkey. But a few days later, he said that we will not go back to Kazakhstan, and will live in Syria.

I succumbed to my husband’s persuasion. Back then, it seemed to me that this was the right decision. Much has been said on the internet that Muslims must move to an Islamic state to live happily.

But once in Syria, we realised that it was a lie. Our life became a nightmare. Getting out of this hell was impossible. There were always ISIS agents around us. They searched for those who wanted to escape, put them in jail, and could execute several people a day.

We lived in total fear and did not confide in anyone. And after the death of my husband, I just fought for survival. ISIS militants scared us by saying that if we were imprisoned, they would rape and kill us. Falling asleep at night, I didn’t know if I and my child would wake up in the morning.

I couldn’t see a way out. We were trapped. We slept on the damp ground under an open sky. Every day children died in the arms of their mothers who were unable to help.

My acquaintance was digging a grave for her child with her hands, since cats and dogs had already begun to eat the body. I could not look at this anymore.

I took a risk. Under fire, bypassing the mines, we got to the refugee camp. Everything was like in a nightmare. I prayed to return home, I wanted to see and hug my mother again.

In this refugee camp in Syria, there were many women from around the world with a similar fate. We did not know what would happen to us in the future.

But at one point in the camp they told us, “Kazakhstan takes back its citizens!” I could not believe it. And only when I actually saw rescuers from Kazakhstan, I realised that we were not abandoned.

Next to me were women from France, Germany and other countries. I remember them looking enviously at us. They asked to find out if Kazakhstan could also take them, pleading to at least take their children from Syria.

I could not help these women. But I decided to help and save an orphan boy from Kazakhstan. He is 7 years old. His name is Musa. I found him in the camp and took him with me.

He is the only one who survived out of his entire family. His father died, his mother was killed by ISIS, his sister was missing, and his younger brother died of exhaustion.

When rescuers from Kazakhstan came to Syria, I told them about Musa. Rescuers found Musa’s grandparents in Kazakhstan and took him home with me. Now he is safe at home, as is my own child.

I returned to Kazakhstan just a few months ago with other women and children. Of course, at first, I didn’t know what to do next.

For about a month, we lived in a rehabilitation centre. We were preparing for a peaceful life. Doctors, theologians, teachers, psychologists and volunteers worked with us. They helped us to recover our identification documents. And after that we returned home to our relatives.

Honestly, I still go through a rehabilitation course. Everyone experiences and copes with the nightmares of war in their own way. Many people just want to forget everything. But I decided that I would openly talk about it.

I managed to do it. I was lucky. My country and my people did not leave me in trouble, did not abandon me. They took me in and forgave me. Now I feel strong and have a great desire to help Muslims learn lessons from my story and not to repeat my mistakes.

Addressing the UN is a great chance to speak out loud about the war in Syria and the fraud caliphate that the terrorists built there.

Yes, I am a victim of terrorism. But now I want to become a fighter against terrorism, to contribute and be a part of this great purpose. I want to be the voice of all female victims of terrorism!

Yes, we made mistakes, stumbled. But everyone has the right to make a mistake, and to achieve salvation after repentance.

Please help other women and children who were also deceived. Perhaps they will also be of service to their country, as I am today.

This text is a transcript of a video testimony by a Kazakh woman caught up in the Syrian conflict who was returned to Kazakhstan through the country’s efforts to evacuate its citizens from the Syrian conflict under Operation Jusan which has already brought back around 600 Kazakh citizens, mostly children and women.

This testimony was prepared for a June 28-29 meeting near New York for the UN member states titled “Synergy among developing states to achieve terrorism free world and 2030 Sustainable Development Agenda” organised by the Permanent Mission of Kazakhstan to the UN and the UN Counter Terrorism Office.