Kazakhstan marks Day of Remembrance of Victims of Political Repression

NUR-SULTAN – Kazakhstan marked May 31 the Day of Remembrance of Victims of Political Repressions by laying floral tributes at the monuments of political repression victims and launching exhibits at museums across the country. This day helps the people of Kazakhstan remember the lessons of the past and treat each other with care, said Nur-Sultan Deputy Akim (Mayor) Yerlan Kanalimov. 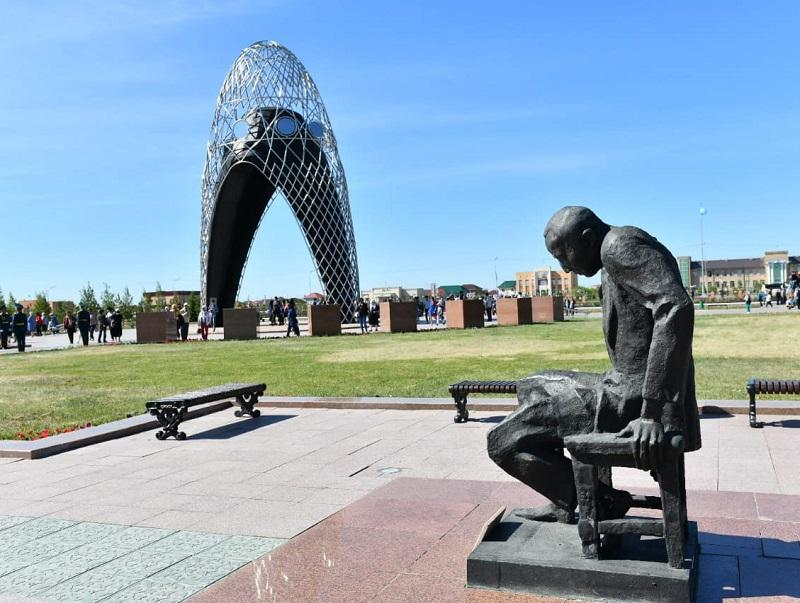 The ceremony of laying floral tributes to the Wall of Memory took place May 31 in the museum-memorial complex of the former “Akmola camp of wives of traitors of the Motherland” (ALZHIR) nearby the capital. A minute of silence honoured the memory of people who fell victim to the persecutions and repressions of the Soviet totalitarian regime.

“According to the established tradition, we again gathered May 31, the Day of Remembrance of the Victims of Political Repression and Hunger, to commemorate our compatriots, who had to face the punitive force of the totalitarian regime. Today, we bow our heads before the bright memory of the innocent victims of political repression and hunger. For us, the next generations, it is important to remember the lessons of the past and to treat each other with care, to be tolerant and united,” said Kanalimov during the ceremony, reported astana.gov.kz.

The participants of the ceremony visited the complex having an exhibition and watched the movie “Fierce cold of ALZHIR.”

On the very same day, Kazakh President Kassym-Zhomart Tokayev accompanied the visiting European Council President Donald Tusk on a tour of ALZHIR, with both leaders laying the wreaths to the Wall of Memory and observing the minute of silence in memory of approximately 10,000 women who died in the camp.

A laying floral tribute ceremony also took place at the monument to the victims of the 1932-1933 famine in the capital. 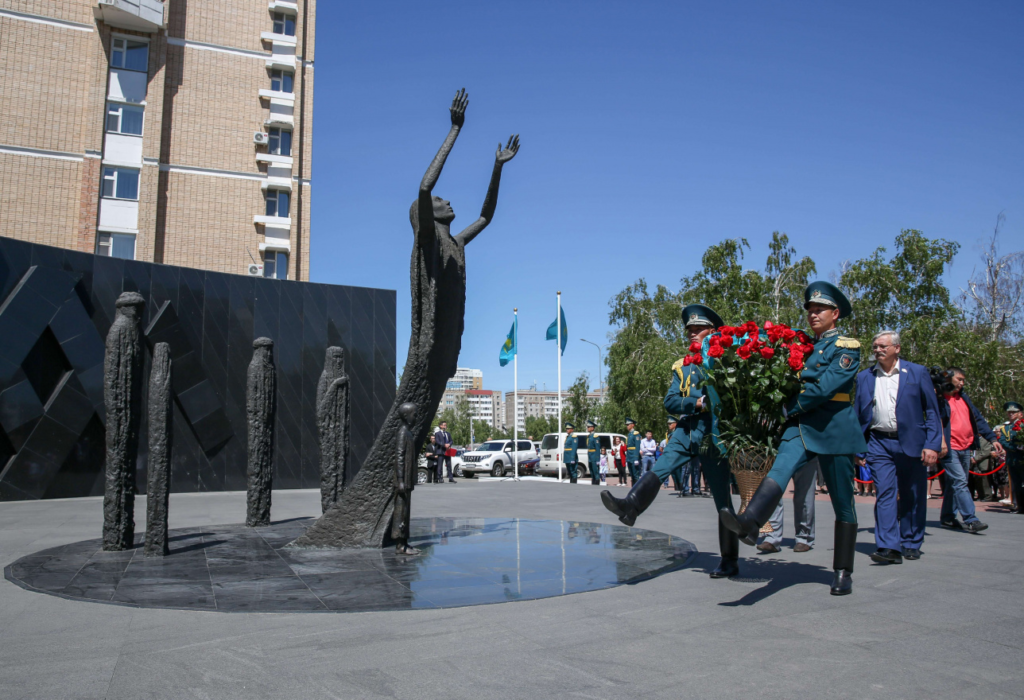 The monument to the victims of the 1932-1933 famine in Nur-Sultan. Photo credit: informburo.kz.

Participants in the Victims of Political Repression in Soviet times: Research and Memoirs national scientific-practical conference familiarised themselves with archive materials from the region’s history museum about the first wave of repressions of the Alash Party members (the 20th century Kazakh intellectuals’ party) and second wave of repressions of industry, transport, culture and education workers. The guests were able to see the book exposition of the Oralkhan Bokei Central City Library of Oskemen, which consisted of four sections: grief about the dark years in the history of the nation, intellectuals who suffered during the period of mournful times, victims of the totalitarian system and the truth about repressions in the Altai region.

“This is the most important historical lesson that we must always remember. Despite the harsh times, the Kazakh people warmly welcomed the deported and disadvantaged people. Therefore, our task is to preserve the core values of an independent Kazakhstan – spirituality, national identity, inter-ethnic harmony and unity,” emphasised the conference participants, reported inform.kz.

In Almaty, residents, officials, students, schoolchildren, representatives of social movements and political parties gathered at the monument to the victims of the 1931-1933 famine in the Karagaily Park. People came to the monument with posters depicting portraits of famous repressed people of Kazakhstan. 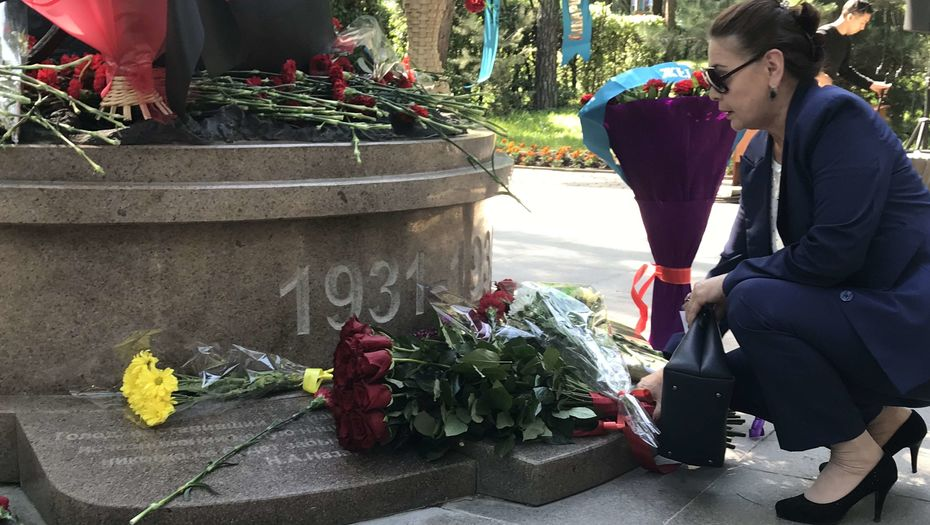 The monument to the victims of the 1931-1933 famine in Almaty. Photo credit: informburo.kz.

In Petropavlovsk, the descendants of convicted or those starved to death decades later also gathered at the monument to the memory of political repressions’ victims and laid flowers to the Wall of Memory.

In Karaganda Region, people gathered at the Spassk monument to commemorate the memory of the political repressions’ victims. The chief imam of the region, the vicar general of the Greek Catholic diocese, and the secretary of the Karaganda and Shakhty eparchies read prayers for the eternal peace of the souls of those killed during the times of repression.

The repressions that started after the Russian Civil War in 1919-1920 and lasted for next two decades took many lives. During the Soviet years, according to historians millions were repressed. In Kazakhstan, from 1921 to 1954, approximately 100,000 people were convicted, more than 20,000 of whom were sentenced to death. Thousands were sentenced to prison. 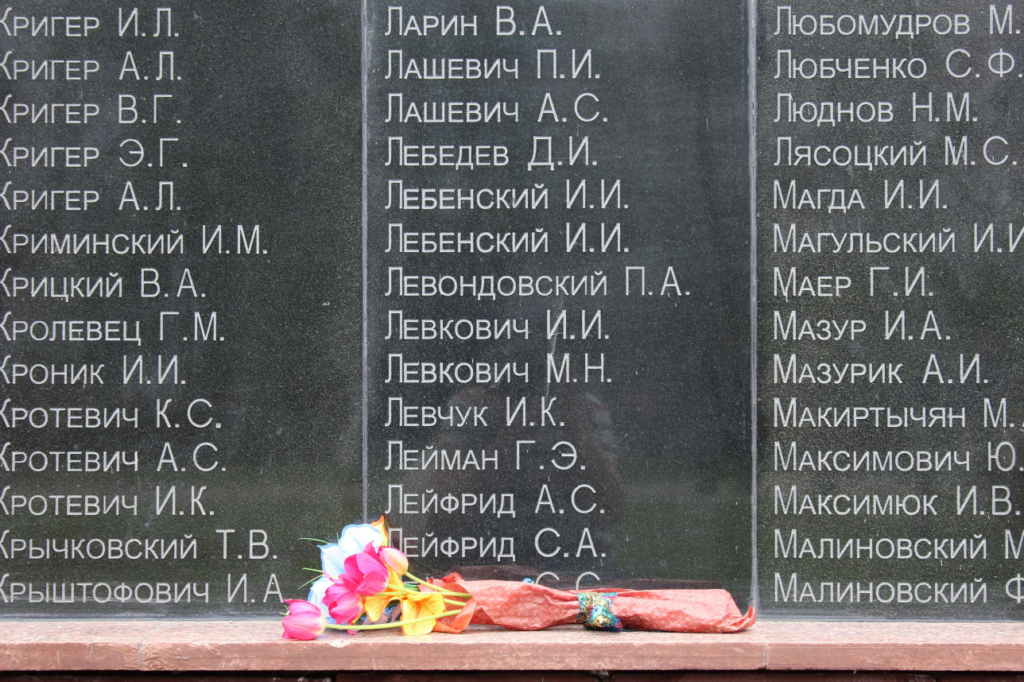 The monument to the memory of victims of political repression in Petropavlovsk. Photo credit: informburo.kz.

Eleven Soviet forced labour camps were created on Kazakhstan’s territory, where the repressed people and their family members were held in cruel conditions. Among them are Main Directorate of the Camps and Places of Detention, the infamous GULAG, ALZHIR and Karaganda labour camp (Karlag).

The political repressions led to the mass death of Kazakh intellectuals. In the end of 1928, many active members of the Alash Party and prominent public figures were arrested on false charges. Among them were Kazakh writer and educator Akhmet Baitursynov, publicist, teacher, writer and environmental scientist Alikhan Bokeikhanov, poet and writer Mirzhakyp Dulatov, engineer Mukhametzhan Tynyshbayev, poet Magzhan Zhumabayev, poet and writer Saken Seifullin, poet and writer Ilyas Zhansugirov, writer Beimbet Mailin, military doctor and scientist Sanzhar Asfendiyarov and political figure Turar Ryskulov. Some of them were shot, others died in the camps. Many of the survivors were later, in 1937, re-accused and executed or exiled to other states of the Soviet Union.

After Soviet Union Communist Party General Secretary Joseph Stalin’s death in 1953, the political community reviewed the cases and many repressed people were released from prisons, while those who were shot or died were rehabilitated posthumously. Kazakhstan continued this work gaining its independence.

The victims of repressions also were ethnicities living on the Soviet Union’s territory, thus, along with Kazakh people, 1.5 million representatives of other ethnic groups were forcibly deported to Kazakhstan and subjected to persecution. Among them were \Chechens, Ingush, Germans, Koreans, Turks, Iranians, Crimean Tatars and Poles.

In 1997, considering the Kazakh citizens and public associations’ appeals and to perpetuate memory of the political repressions’ victims the then Kazakh President Nursultan Nazarbayev issued a decree on April 5, 1997 officially proclaiming May 31 as the Day of Remembrance of Victims of Political Repressions.