By Nazira Kozhanova in International on 27 May 2019

NUR-SULTAN – Global challenges and risks can be dealt with via closer cooperation between the European Union (EU) and Central Asia, said Head of EU mission to Kazakhstan Ambassador Sven-Olov Carlsson May 23 during the Day of Europe in Kazakhstan. 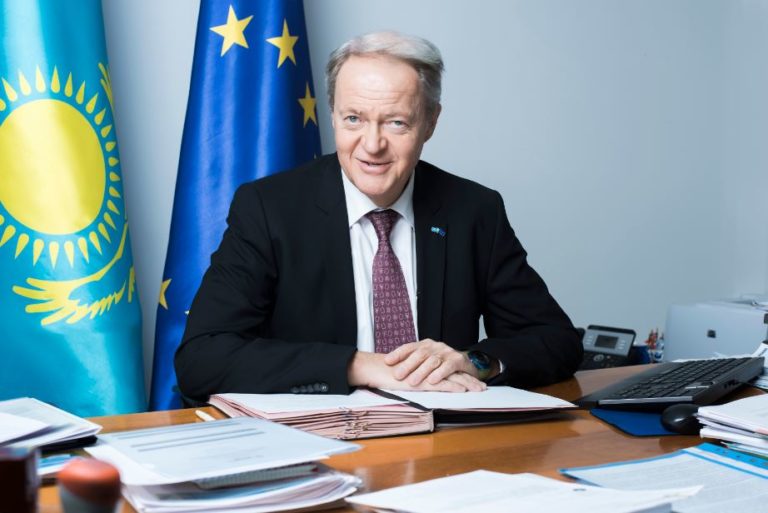 “What’s new about the strategy is most likely the fact that we took into consideration the great interest and new opportunities for regional cooperation between the five countries of the region, a path that was, perhaps, not closed but rather narrow for a long time. And, now, new opportunities are clearly visible, and we are very encouraged by this – we do not impose anything on anyone but, since the EU itself is based on regional cooperation, we are ready to share our experience, both positive and negative, if it is of interest to our partners,” said Carlsson, as reported by the Kursiv newspaper.

The new strategy also accounts for EU cooperation with Central Asian states in ensuring sustainable development in all sectors of the economy, supporting the private sector and diversifying the economy, which is highly dependent on the energy sector according to European experts, as well as on environmental issues and building a green economy.

“Therefore, if earlier a lot was said about global challenges and risks, none of the risks have disappeared, but it is important that regional cooperation becomes an opportunity and a chance (to tackle them) that opens up both within the Central Asian region and in cooperation with Europe within the wider region, so to speak,” said Carlsson.

Carlsson described the implementation of the strategy in practice.

“Of course, the strategy provides for human contact – the student and academic staff exchange between universities. All this serves our common interests, I noticed in the first six months of my stay in Kazakhstan that there is a very large demand in these areas. And I think it is in our interests to respond positively to these opportunities,” said Carlsson.

He emphasised the strategy was developed through dialogue between the EU and Central Asia.

“I cannot say exactly how many proposals of the Kazakh side were made specifically, but there was a good dialogue, and we hope that, in the implementation of this strategy, we will work closely with Kazakhstan and with other countries of the region,” said Carlsson.

The European Commission approved the new EU Strategy on Central Asia May 15. It is expected to be reviewed and approved by the EU Council on foreign affairs, composed of the foreign ministers of the 28 EU member states and the EU High Representative for Foreign and Security Policy Federica Mogherini.