NUR-SULTAN – Astana Motors, Kazakhstan’s leading car distributor, will build a Hyundai car assembly plant in Almaty, with the first cars slated to roll off its production line in 2020. 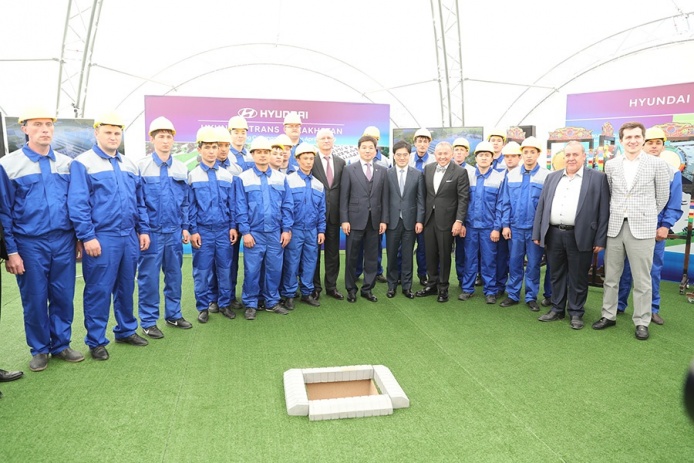 The Hyundai Trans Plant will stretch across 25 hectares in the city’s special economic zone.

“We will complete a car assembly workshop by the end of this year. The assembly will be launched in January that will include a disassembly knock down. While a more complex assembly of Hyundai Accent and Hyundai Creta will start in the middle of 2020,” Astana Motors Chair Nurlan Smagulov told journalists.

The plant will have a production capacity of 30,000 cars per year, half targeting the local market and half oriented for export to neighbouring countries. The capacity will eventually rise to 45,000, making Hyundai cars more accessible to Kazakh citizens.

Twenty-five billion tenge (US$66 million) will be invested in the plant, of which 20 percent will come from Astana Motors. The rest will come through Development Bank of Kazakhstan loans.

“We are negotiating a loan with the Development Bank of Kazakhstan. We also are in negotiations with the government to receive support for export of these cars to neighbouring countries,” said Smagulov.

Astana Motors seeks to achieve 50 percent of localisation to be able to export to neighbouring countries, except for Russia, where parent company Hyundai Motors owns several plants that supply the Russian market.

The company’s long-term plans include the construction of a plant to build car components.

“It is where plastic, glass, seats and other spare parts will be made. It will not be done by us. We will just create the conditions, facilities, place the order at the market and invite small and medium-sized businesses, so that they produce components for us. It is a usual practice for plants worldwide,” said Smagulov.

He said the popularity of the Hyundai brand was among the reasons the company decided to start car assembly. “Hyundai is a very popular brand not only in Kazakhstan, but in the Commonwealth of Independent States. Components for the Kazakh SaryarkaAvtoProm plant were often out of stock at the [Hyundai] plant in St. Petersburg. It could no longer supply components at the quantities we needed cars and offered supplying stamping dies,” said Smagulov.

The company has also grown “mentally.”

“We do not want to be just importers of passenger cars. We are ready to invest our knowledge and experience in big projects like this car assembly plant. Hyundai Motor also supported us and signed a license agreement with us. The parent company will share its intellectual product with us and will provide engineering documentation,” said Smagulov.

Obtaining a localisation certificate is also important for the company.

“This will give us the opportunity to export our cars to Uzbekistan, Kyrgyzstan, Tajikistan and other Central Asian countries. We will not have access to Russia, but Ukraine is an attractive market,” he explained.

Smagulov said the prices for the locally assembled cars will not be cheaper at the first stage, as production process costs are heavily pegged to currency. As the company achieves greater levels of localisation, it will be better able to stabilise the prices.

“This is impossible, because the currency component will be present even in our localisation. For instance, equipment for a new plant will be delivered from Japan and South Korea. It will be bought not in tenge and we will need to earn this money and pay back,” he said.

The plant is not the company’s first foray into automobile assembly. Astana Motors opened its first Hyundai truck and bus assembly plant six years ago. Currently, the production of Hyundai County is 51 percent localised and the line is exported to Russia, Belarus and Tajikistan.

Kazakh Minister of Industry and Infrastructure Development Roman Sklyar said the planned plant is a strategic and important step for the country’s car manufacturing industry.

“The new plant will create more than 700 jobs. The products will target both the domestic market and export markets,” said Sklyar.

The plant joins 39 other projects in the industrial zone worth 144 billion tenge (US$380.4 million). Five plants involve Japanese, German, Chinese and Russian capital.

This year, four projects will be launched with 367 billion tenge (US$969.5 million) in investments, including a Kazakh-Chinese steel pipe plant.