NUR-SULTAN – Four Kazakh presidential candidates and three of their representatives discussed social and economic issues and how to solve them in a May 29 live televised debate at the Kazmedia Centre in the capital. 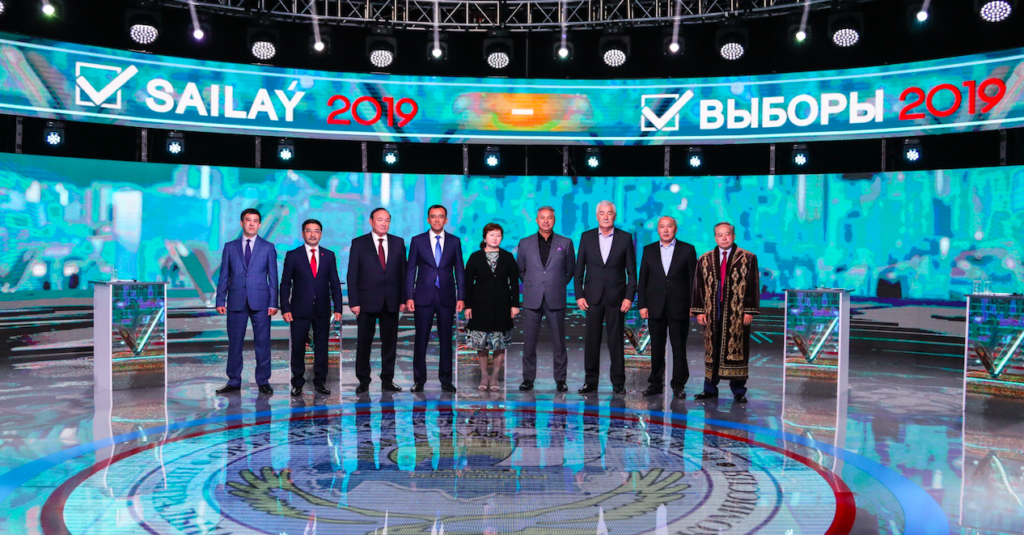 Journalists Kymbat Doszhan and Yerlan Igissinov led the live broadcast of the debate.

It included three rounds. The first round focused on economic development and included two parts. In the first part, candidates presented remarks on their campaign platform on a given topic for 1.5 minutes.

“Our candidate has a clear economic programme. It includes a number of areas. First, it is stimulating the domestic goods production. It’s time to saturate the domestic market with our goods. Second, to support agro-industrial complex in the country. Third is the development of the financial sector. Fourth, infrastructure development,” said Ashimbayev starting the round.

“Gas, oil… someday the time will come when we have to save these resources. But agriculture will always grow. It can be a driver for the development of Kazakhstan’s economy,” he said.

He also stressed agriculture can be a driver for the development of the food industry, chemical industry, light industry, mechanical engineering and construction industry.

Akhmetbekov, in turn, called for justice in the world, charging that oligarchs, transnational corporations and speculators currently make the rules.

“It is necessary to tighten legislation in this area and step up interaction with the labour community to combat this evil. Today, the capital is becoming a false value, while people have faded into the background,” he said.

“We welcome the development of the Eurasian Economic Union and the One Belt, One Road project. Today, the material stratification of society is deepening, employment is declining, and half of the working-age population is not working. At the same time, the markets of the Eurasian Economic Union and neighbouring China are open to our products. These are our natural opportunities for the country’s economic growth,” he added.

Tugel emphasised the issue of corruption. He said each citizen has the right to receive his share of the county’s oil resources and gas as it is done in Norway and the United Arab Emirates.

“I am very worried about youth unemployment, lack of housing. Everybody has mortgage loans on their neck… Through the development of light and heavy industry, we can provide all young Kazakhs with jobs. Supporting the spiritual development of Kazakhstan, we will be able to develop our country,” he said.

Kossanov spoke about obstacles for the development of small and medium businesses, the difficulty of the public in getting loans, the issue of corruption and said the country needs multiple, viable parties.

“We are talking about the national economy. The economy should work for people. People themselves should make the main decisions. For this, all parties that participate in the elections must present and protect their social programme to the people and they will decide which programme to support,” he said.

“Following the European Union example, it is necessary to introduce lower value added tax rates for priority sectors of the economy, including innovative technologies. Today, it has become much more profitable to trade even the most substandard goods of others than to conscientiously produce our own. But it should be the opposite,” he said.

Taspikhov said that laws adopted in the country instead of improving conditions for entrepreneurs, on the contrary, constrain opportunities and initiatives of citizens.

“(We need to) reduce the share of foreign companies in strategic areas and direct these funds to support people. We need to support people who want to do business in rural areas to be exempted from taxes in the first five years,” he said.

During the round’s second part, the candidates discussed the creation of social and economic conditions for rural citizens, support for small and medium businesses, corporate responsibility to employees, environmental issues, innovations in agriculture and scientific development.

The second round focused on social modernisation and consisted of two parts which included candidates’ remarks and a question from the television presenters.

Ashimbayev spoke about strengthening teachers’ status and trilinguism. Bektayev also spoke about education, focusing on the quality of textbooks. Akhmetbekov said Kazakhstan should revive the Soviet education system rather than following the Western education system. Tugel, in turn, said education should be free and of high quality. He, in contrast to Ashimbayev’s position, promoted the native language learning.

“We need to declare a moratorium on reforms in education. To hold a meeting of the entire pedagogical community, which will bring together teachers from primary schools to universities, and decide what education should be in Kazakhstan,” he said.

Peruashev spoke about innovations in education both material and mental.

“We need to teach children innovative thinking and learn to learn all their lives,” he emphasised.

Taspikhov, concluding the round, spoke on the lack of professional technicians.

“Therefore, universities that do not give knowledge need to be closed or reformatted into vocational schools and to train specialists who are really in demand in the market,” he said.

The debates ended with each candidate addressing the people of Kazakhstan. Each of the candidates briefly spoke about their values, motivations and promises if they become the president of Kazakhstan.