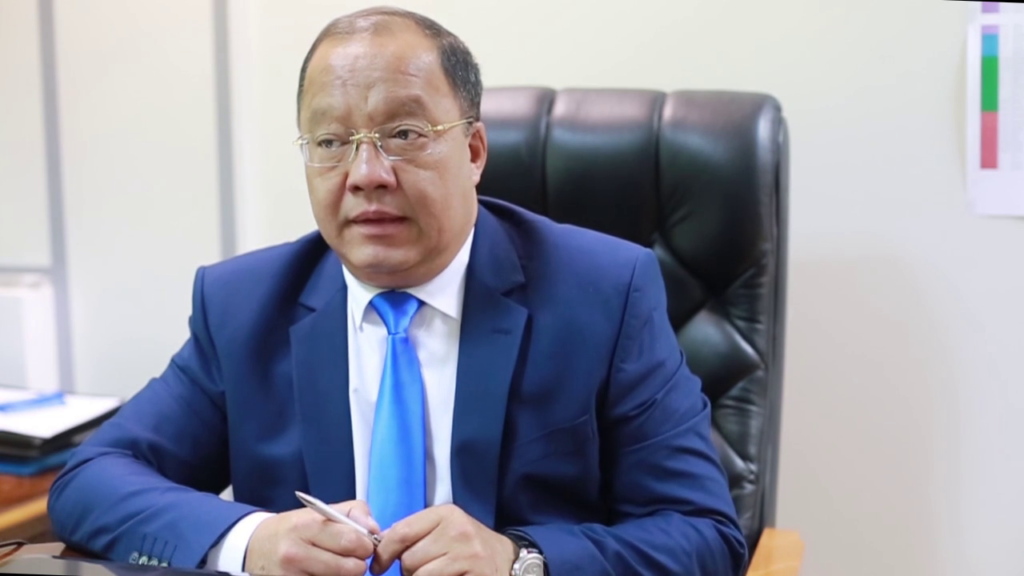 Rakhimbekov was born in Atasu village in the Karaganda Region. His wife, public-sector employee Saltanat Rakhimbekova, is the director of the international organisation EXPO&Women. They have two daughters, one of whom also works for the organisation.

Before being chosen by his party to run for president, Rakhimbekov was appointed as Board Chairperson of the National Agrarian Science and Education Fund. He holds a PhD in Economics from the Kazakh National Academy of Natural Sciences and a Master of Arts in Construction from Eurasian National University. Rakhimbekov has more than 30 years of experience working on agriculture-related issues in the public, business, science and education sectors.

“Why? Because if not me, then who? There are problems in the country and I know how to solve them,” he said in a Facebook post explaining his decision to run. “I have worked in different sectors: in civil service, in business, in agriculture, in science, in education. I started from the very bottom, one might say; therefore, my choice is conscious. I am ready to take responsibility for the future of our country.”

Rakhimbekov shared his expertise by making suggestions on ways to improve the state of Kazakhstan’s agriculture.

“I often hear: we are so used to importing goods that we can no longer do anything ourselves. Sixty workers of Zhezkazgan dairy plant prove it’s not the case every day! Here, they process from two to three tonnes of milk per day, produce more than five types of dairy products. Their key advantage is the production of zhent (Kazakh national sweet food made of wheat and dairy) and several types of kurt (Kazakh national savoury dairy snack akin to dry salty yogurt). Now, tell me that we cannot do anything! Tell it to them! Real Kazakh manufacturers! It is exactly this kind of business that I will support, first of all, as the President of Kazakhstan,” he added.

Rakhimbekov is known for being active on Facebook. He frequently hosts live translations for his followers and comments on Kazakh news. He has often criticised government policies on his social media account, particularly agricultural policies, including through his comments regarding offering entrepreneurship skills to rural citizens.

“And 99.9 percent of self-employed and unemployed people do not need knowledge in the field of business planning, developing financial models. They need basic animal and crop care skills. They need to be taught how to achieve an increase in milk yield and weight gain, how to achieve an increase in the yield of vegetables, how to use the milking or shearing machine. [They need to learn] When and where to sow, to apply certain fertilisers. This originally was the component for training rural self-employed people under the Productive Employment Programme of the Ministry of Labour,” he wrote.

Despite criticising government policies, Rakhimbekov is a long-time supporter of Former Kazakh President Nursultan Nazarbayev, sharing his personal experience in his post.

“But I would like to recall the end of the 1980s and the beginning of the 1990s. Back then, my wife Saltanat and I were doing our graduate degrees in Moscow. In May 1989, the First Congress of People’s Deputies of the USSR, the newly formed parliament of the country, began its work. The meetings were broadcast live from 10 a.m. to 10 p.m. or even 11 p.m. every day. For days we did not move away from TV. Among the grey speeches of the leaders of other republics or the bright but obviously populist speeches of the ‘democrats,’ the speeches of Nursultan Nazarbayev were distinguished by their prudence and reasoning based on concrete facts and figures,” he wrote.

Rakhimbekov shared his vision of Kazakhstan’s future in his interview.

“In production today, the average milk yield is about 8,100 kilogrammes per milk cow. On average, in Kazakhstan, we have not reached the 3,000-kilogramme level. What is this telling us? If we achieve an average of 8,000 kilogrammes per cow, it will be possible to receive earnings through the export of about $10 billion,” he said.

“The future of Kazakhstan is linked to agriculture. Raw materials tend to end. It is unlikely that we will be able to compete with industrialised countries. IT technology? There will be a brain drain, as is happening now between India and the United States. Only agriculture remains. And the village,” he added.