By Aidana Yergaliyeva in Sports on 4 May 2019

NUR-SULTAN – Jacob Fuglsang, 34, closed the spring classic season by taking the Astana Pro Team’s blue jersey to his first monumental victory April 28 at the men’s Liège-Bastogne-Liège. The 256-kilometre trek through the Belgian Ardennes is one of the world’s oldest and most prestigious one-day bike races. 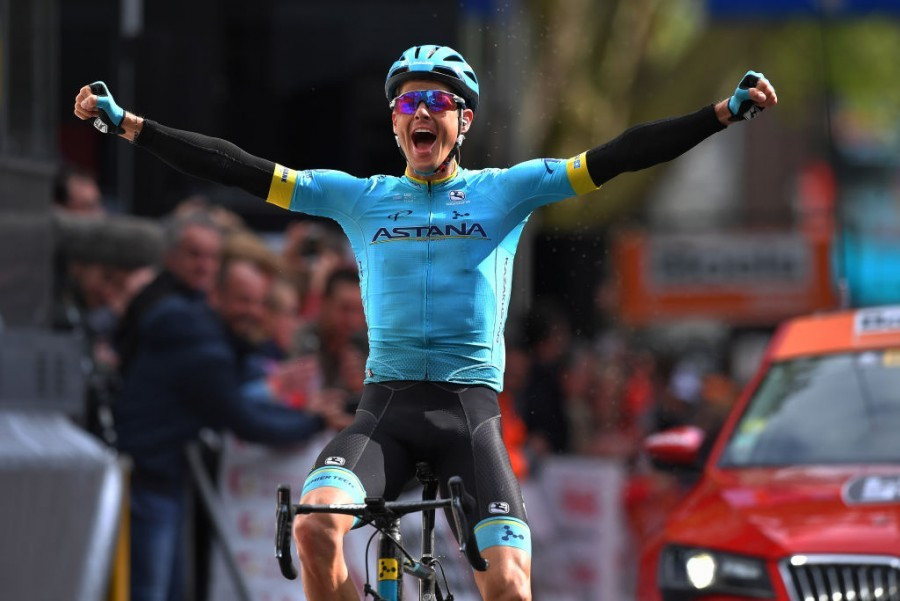 With 13 kilometres remaining, Fuglsang’s well-timed attack on the last climb of the Roche-aux-Faucons distance threw his rivals off, allowing him to build a 20-second advantage.

Fuglsang won the race in 6 hours, 37 minutes and 37 seconds. German Bora-Hansgrohe’s two cyclists, Davide Formolo and Maximilian Schachmann, came in second and third, finishing with an additional 27 and 57 seconds, respectively.

“This is fantastic! I am so happy! This is my biggest victory in a one-day career race. Finishing this great week with such an incredible result is something special. The team took me well ahead of the final climb at the crucial moment of the race! They did a brilliant job! As for me personally, the finish line was at the top of this climb; I gave everything I had during my attack. At some point, I looked around and saw no one behind. Then, I believed that’s all in and I continued to work 100 percent,” said Fuglsang, reported olympic.kz.

The race day’s rainy weather, with a temperature that did not rise above 8 degrees Celsius, made it especially difficult for the athletes. Fuglsang almost crashed on a wet descent in the final five kilometres, but managed to stay ahead.

“That slide was a scary moment, but it gave me a bit of adrenaline for the last part,” he told bbc.com. “It’s an amazing feeling.”

“Everyone understands that the conditions today were extreme. It poured rain for hours and the temperature dropped to three degrees. Sometimes, you just shiver from the cold,” said Schachmann.

Liège-Bastogne-Liège is known for its sometimes extreme weather conditions. In the 1980 race, cyclists had to compete during a snowfall. France’s Bernard Eno, who won the competition, froze some of his fingers and needed several weeks to restore mobility.

Fulsang showed consistently high results at this season’s Ardennes Week, finishing on the podium in all three Ardennes Classics. He took the bronze in the April 21 Amstel Gold Race and the silver in the April 24 Fleche Wallonne. The gold complements his awards collection.

The Liège-Bastogne-Liège, often called the La Doyenne (Old Lady), has been drawing cyclists since 1892. The race was initially limited to amateurs, with professionals joining two years later.

This season, Liège-Bastogne-Liège set a new finish. The mid-section was tougher with the addition of the Côtes de Wanne and Stockeu and Haute-Levée making a return. The final 10 kilometres featured a fast, sweeping downhill section before a flat run to the finish line.

The route previously culminated in an uncategorised rise into Anse, which Fuglsang said suited him better.

At first, the Old Lady began and ended in the town of Spa. In 1908, the start and finish were moved to Liège, where they remained until 1992. Organisers again moved the end of the race to the city of Anse, not far from Liège, in an effort to complicate the final stretch by adding another mountain. This season, for the first time in almost three decades, the finish returned to the centre of Liège.