By Staff Report in International on 22 March 2019

ASTANA – The Soyuz-FG launch vehicle sent the Soyuz MS-12 manned spacecraft March 15 at 12.14 a.m. local time from the Site no. 1, also known as the Gagarin’s Start, of the Baikonur Cosmodrome. The spacecraft connected with the International Space Station (ISS) six hours after the launch and delivered 126.9 kilogrammes of cargo. 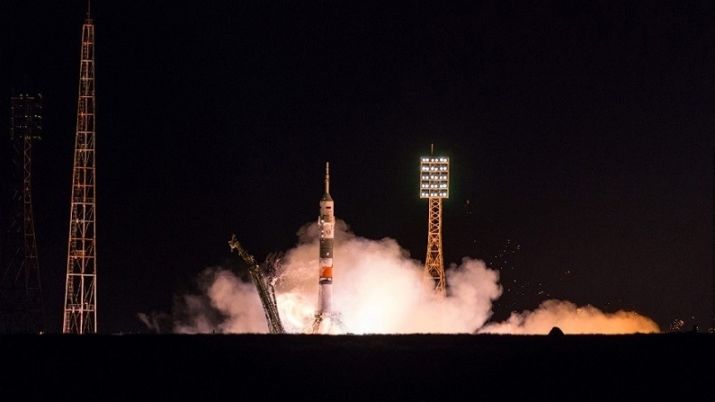 Commander of the Soyuz MS-12 spacecraft Alexei Ovchinin flew into space for the second time, while American astronauts Nick Hague and Christina Koch were on their first spaceflights. Together they are the crew of the expedition 59/60. They will stay in the orbit for 204 days. Earlier in October, Ovchinin and Hague failed to reach the ISS due to the Soyuz-FG launch vehicle accident.

During the expedition, the Soyuz MS-12 crew will conduct approximately 300 medical and biological experiments, and experiments on remote sensing of the Earth. In addition, there will be an ultrasound study of almost all human internal organs, which is a unique experiment that will study the influence of flight factors on the human body.

The launch of Soyuz MS-12 was the first from the Baikonur Cosmodrome this year. The next expedition to the ISS is planned for this summer.

The ISS now has two crews of astronauts on board. The Crew Dragon of the expedition 58 that includes Oleg Kononenko (Roscosmos, Russia), Ann McClain (The National Aeronautics and Space Administration (NASA), the United States) and David Saint-Jacques (Canadian Standards Association (CSA), Canada) docked at the space station March 3. They are the first commercial crew vehicle to visit the orbiting laboratory and the first to launch into orbit from the United States since NASA’s space shuttle Atlantis in 2011.

Kononenko and Ovchinin are planning an exit to outer space May 29. The NASA astronauts have three spacewalks scheduled for March 22, 29 and April 8.