By Saltanat Boteu in Nation on 28 February 2019

ASTANA – Kazakh President Nursultan Nazarbayev outlined at the Feb. 27 18th Congress of Nur Otan Party efforts to improve social supports and living standards in Kazakhstan. According to the instructions from the head of state, the government will allocate two trillion tenge (US$5.3 billion) from the country’s budget for social projects over the next three years.

The congress approved the party’s agenda until 2030.

“Nur Otan promotes the adoption of necessary state decisions. New time dictates new challenges. The main thing is to work out the right direction of development and to mobilise the society… Today, the congress is considering a party programme until 2030. Ten goals in the next ten years are developed on my instructions,” said the President.

Nazarbayev said social assistance should be directed towards low-income citizens and large families.

“I instruct the government to increase the criterion for providing targeted social assistance for people in need, especially large families, to 70 percent of the subsistence minimum (29,698 tenge (US$78.8))… To establish a minimum [monthy] payment of approximately 21,000 tenge ($US55.7) for each child in a large family… I also instruct to increase allowance for parents, guardians and families raising children with disabilities by 30 percent,” said the President. 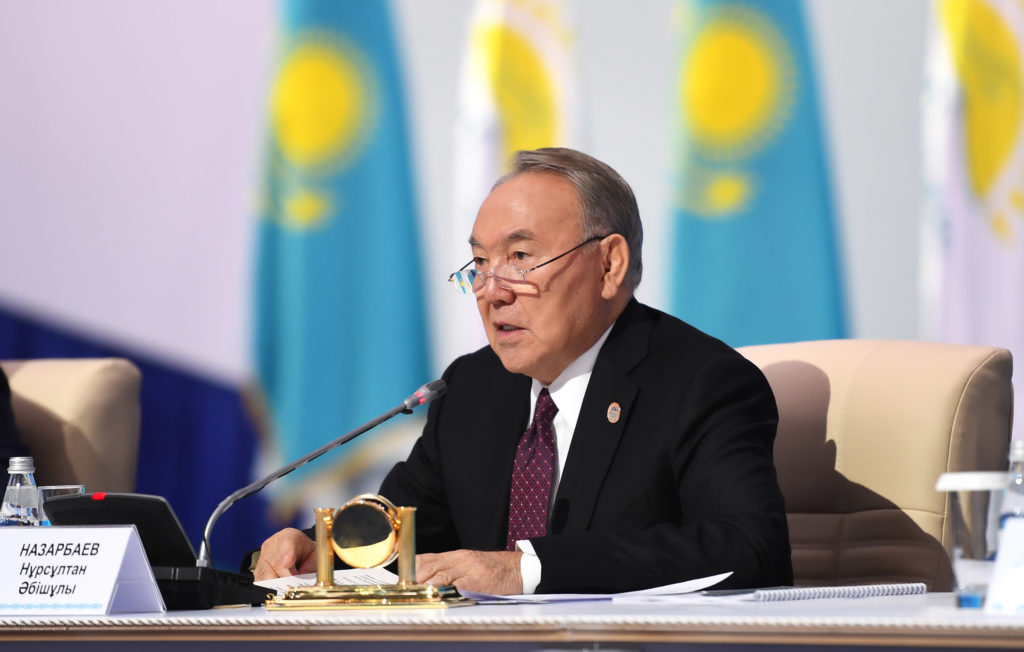 He also spoke about the need to create more flexible employment opportunities for parents of large families, including opportunities to work from home. He also said microcredits should be made available to rural residents.

“The basic principle of social assistance is a social contract and the mandatory participation of able-bodied people in employment measures. Akims (mayors and regional governors), the government, the party and the Atameken National Chamber of Entrepreneurs should jointly help people with these issues. The akims should review the regional assistance programmes for families in need,” he said.

“I instruct from July 1 to increase wages for low-paid public sector employees and to grass-roots workers of executive bodies who work with citizens at the regional level and in the villages by 30 and 25 percent respectively,” said the President.

“There is a serious disproportion between the centre and the regions, we need to support regions. Additionally, 980 billion tenge (US$2.6 billion) will be allocated for these purposes,” he added.

The President spoke about housing issues, especially the availability of housing for large families and families with children with disabilities.

“It is necessary to intensify work on construction of housing. I instruct to build more than 40,000 rental apartments for large and low-income families as a part of the Nurly Zher programme. In the next seven years, 50 billion tenge (US$132.6 million) will be allocated for this purpose annually,” said Nazarbayev.

The healthcare system is also slated for a funding increase. High-quality healthcare services should be available in any part of the country, said the President, calling for an increase in healthcare spending.

“For development of this task, additionally, I instruct to allocate approximately 120 billion tenge (US$318.24 million). As a result, the quality and availability of inpatient medical care in seven regions will increase covering approximately 100,000 families,” said Nazarbayev.

The President emphasised the importance of developing rural areas and instructed the government, akims and maslikhats (local assemblies) to select villages for social development. Among the issues to be addressed are clean drinking water and gas supply. During the next three years, the government will allocate 10 billion tenge (US$26.52 million) for development of small and single-industry towns.

“This will allow us to solve the issues for 2.2 million citizens,” said Nazarbayev.

“In recent years, huge work has been done on the construction of the state road network. More than 14,000 kilometres of roads were built. This has never happened in Kazakhstan. This is our pride. Our grandchildren and great-grandchildren will drive along these roads,” he said.

For the improvement of the road conditions, the President instructed to allocate 350 billion tenge (US$928.2 million). This fund should improve 95 percent of main roads of regions and districts.

The President also spoke about the recent change in the government’s structure and results expected from its work in the future.

“The government changed and its composition was updated by 70 percent. The new cabinet and all akims need to start implementing the tasks… We need to raise the status of the party. Everything I said here formed the basis of the economic section of the new party programme. Each member of the government will be personally liable and responsible for that,” said Nazarbayev.

Nazarbayev also stressed the importance of communication between the government and citizens to get their feedback about issues in society.

“We have created a special monitoring committee in the President’s office. Now we are starting the Khalyqqa Komek (Assistance to the People) project. We will respond to urgent demands of the society, focusing the attention of state bodies on them. Party members must do this,” he said.

“For this, it is necessary to form a powerful feedback system with the population and to strengthen public reception of the party. They should work according to the here and now principle,” concluded the President.