By Dilshat Zhussupova in Culture on 22 February 2019

ASTANA – Following its December debut in Kazakhstan, the Kazakh version of the French musical Notre-Dame de Paris (The Hunchback of Notre Dame) will be performed in Azerbaijan, Kyrgyzstan, Tajikistan, Turkmenistan and Uzbekistan in the next three years, reports Kazakh-tv.kz. 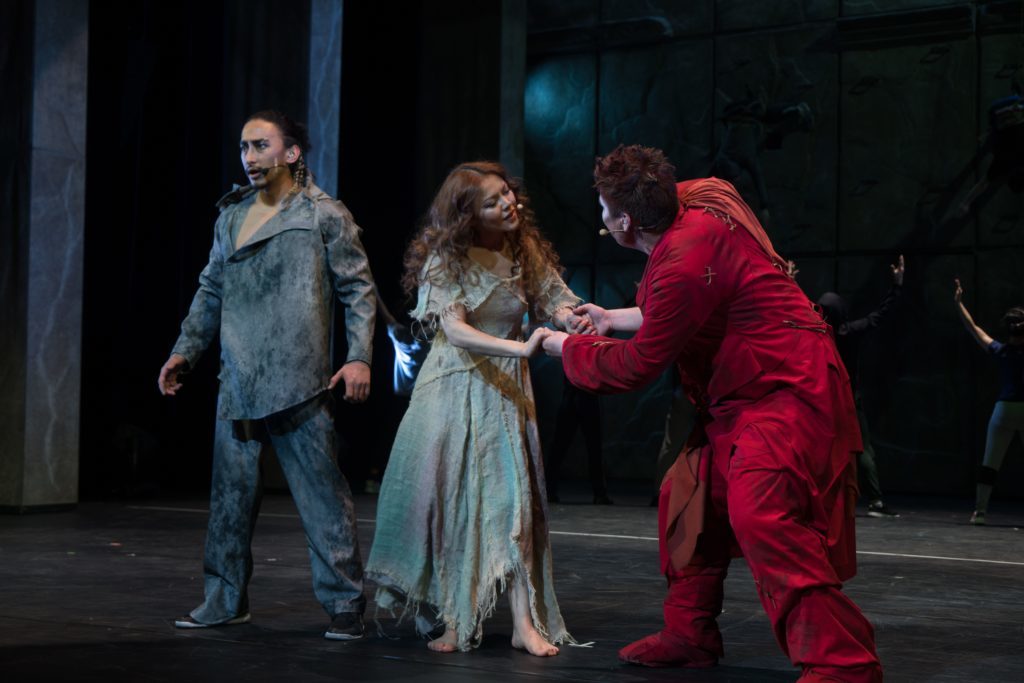 Upcoming performances across Central Asia will retain the musical’s original storyline and musical compositions and feature hit songs “Belle,” “Le temps des Cathédrales” and “Vivre” in the Kazakh language. More than 70 actors, singers, dancers and acrobats will perform the musical’s famous numbers dressed in costumes made in Kazakhstan.

“The world famous musical was performed for more than 11 million spectators,” said Kazakh State Concert Organisation Director Zhenis Seidulauly. “Last year, it was performed in the Kazakh language for the first time. This is a success for Kazakhstan and Central Asia.”

The Kazakh-language musical was first performed on the stage of Kazakhstan’s Palace of Peace and Harmony Dec. 18-24 to commemorate the capital’s 20th anniversary, supported by the Kazakh State Concert Organisation and Kazakh Ministry of Culture and Sport. Its ensemble featured Kazakh actors, singers, dancers and acrobats, whose auditions were overseen by the team behind the original musical, including Nicolas Talar, Luc Plamondon, Riccardo Cocciante and Martino Müller, and whose acrobatic performances were choreographed by gymnast Jonathan Ghadan.

The musical Notre Dame de Paris is adapted from a novel of the same title by French novelist Victor Hugo and centres on cathedral bell-ringer Quasimodo and his love for a gypsy named Esmeralda. The music was composed by Cocciante and lyrics penned by Plamondon. The musical debuted in Paris in 1998 and has since been professionally played in Belgium, Canada, China, France, Italy, Japan, Lebanon, Luxembourg, Poland, Russia, Singapore, South Korea, Spain, Switzerland, Taiwan, Turkey, the United Kingdom and the United States and has been translated into English, Flemish, Italian, Kazakh, Korean, Polish, Russian and Spanish. It had the most successful first-year run of any musical ever, according to the Guinness Book of Records.

A musical on Kazakh warrior Karakypshak Koblandy is also in the works for staging across Central Asia.