By Saltanat Boteu in Astana on 22 February 2019 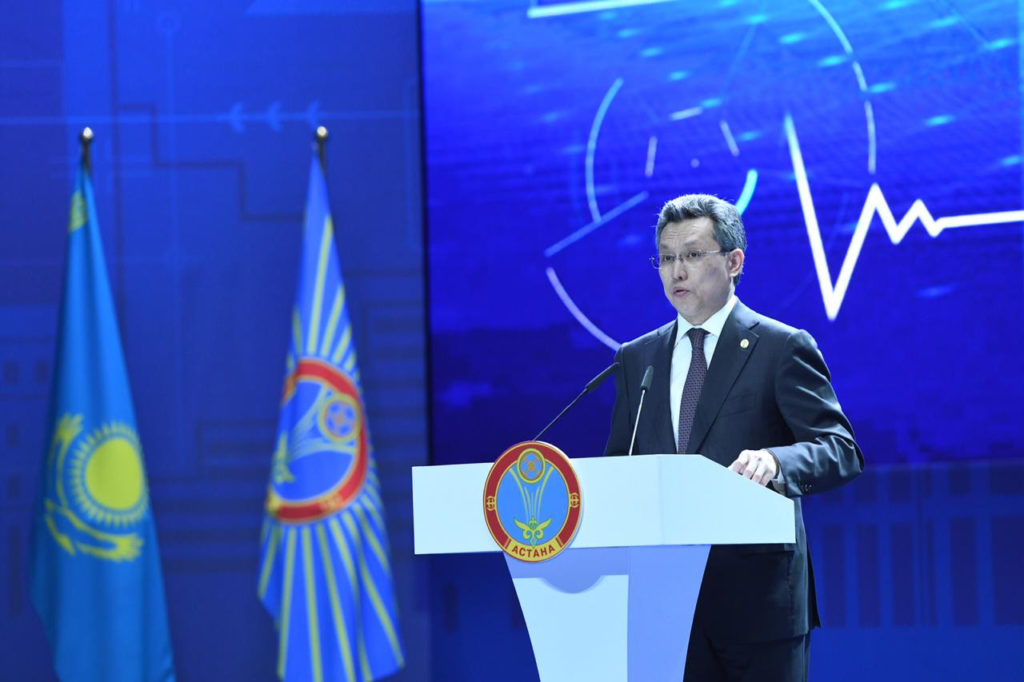 The meeting came as the city administration is seeking to help large families with housing, increase educational options and bring gas power to the outskirts of the city.

About 5,000 people took part in the dialogue with the akim. Among them, 1,600 participants were present in the Astana Concert Hall and 3,400 participated online. The meeting was broadcasted on Facebook, reported astana.gov.kz.

The akim’s presentation began with the issues of social security.

“Social security is the number one priority. It is not only about families with many children or low-income families, but also about people with disabilities, pensioners, participants of the Great Patriotic War and other categories,” said Sultanov, referring to the veterans of the 1941-1945 war of the Soviet Union against the Nazi Germany.

Housing is also a concern among citizens and the city administration is examining ways to meet the housing needs of large families.

“We will give apartments for rent to mothers of many children,” said the akim. “Not only rent but make it so that they have the opportunity to gradually buy an apartment. That is, the money they earn will not be given to the apartment owners but invested to purchase the apartment.”

The work with equity holders also continues. Currently, the number of construction objects that had complains from citizens reduced from 68 to 29.

The akim also said the shortage of kindergartens will be alleviated within two years. Currently, slots are available for 90 percent of preschool students age three to six years.

“We strive to ensure that in 2020 this figure is closer to 100 percent,” noted Sultanov.

In the next five years, schools for 120,000 students will be built and teachers’ wages will be increased to improve teaching quality.

Based on the public-private partnership, extended-day groups will be created. They will be led by volunteer students and specialists on a paid basis. Such groups will generally be available for children from large families and other privileged categories of citizens.

Youth policy will be linked to employment. In order to obtain popular working specialties in institutions of technical and specialised education, more than 1,000 additional grants are provided. Recent graduates will be able to find a job under the Youth Practice programme.

The city administration also discussed healthcare services in Astana during the meeting, including efforts to reduce mortality from diseases, create infrastructure to prevent diseases and establish a social package for medical personnel. These efforts include the Doctor at Home project. The project aims to use the first floors of residential buildings as local healthcare clinics.

The issues of ecology were also raised in the report. The city’s Koktal-1 and Koktal-2 residential areas and the Southeast microdistrict and the Zheleznodorozhnyi Village will be supplied with gas by the end of the year. This should decrease the amount of harmful emissions to the atmosphere and ease citizens’ daily routine.

The number of vegetation plantations across the city will increase by 500,000. Five squares and two boulevards will be constructed by the end of the year.

By 2030, storm sewers will be installed in two-thirds of the renovated capital. A comprehensive plan has already been developed to expand the storm sewer system.

The akim shared the statistics and changes planned to be implemented in five years. The number of wastewater treatment plants will grow from 14 to 26. The funding for the sphere will increase from 5 billion (US$13.29 million) to 7 billion tenge (US$18.61 million). The catchment basin will grow from 13,000 hectares to 23,000.

Sultanov emphasised security in the city. Currently, 6,000 Sergek cameras (an intelligent video monitoring, analysis and forecasting system) operate in Astana. They are synchronised with each other. The Sergek system helped to improve situations on the road decreasing the death rate in accidents and the number of crimes committed in the courtyards by half.

Because of the iKomek urban centre and the citizen’s vigilance, the loss of 5,000 manholes were identified last year.

“At the akimat, the iKomek city monitoring and rapid response centre was created, where you can call 109 and report any problem. Over the past year, a staggering figure – and we received more than one million messages, – almost everything was solved,” said the akim.

During the meeting, which lasted three hours, Sultanov was asked questions from 36 citizens. After the meeting, he continued the personal reception of citizens accepting 52 people for several more hours.