World Bank forecasts Kazakhstan’s growth to ease to 3.5 percent in 2019

By Zhanna Shayakhmetova in Business on 21 January 2019

ASTANA – The growth rate of Kazakhstan’s economy will decrease to 3.5 percent this year as oil production growth levels off and further fiscal consolidation efforts continue, according to the World Bank’s Global Economic Prospects: Europe and Central Asia Darkening Skies report. Global growth is expected to slow to 2.9 percent. 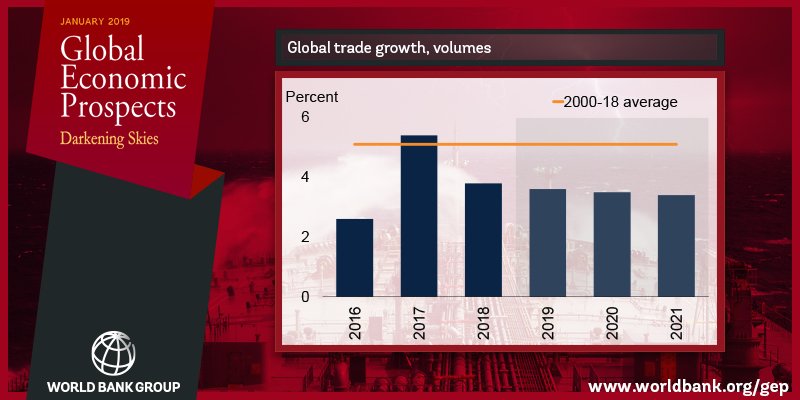 “International trade and investment are moderating, trade tensions remain elevated and financing conditions are tightening. Amid recent episodes of financial stress, growth in emerging market and developing economies has lost momentum and is projected to stall at 4.2 percent this year,” said the report.

Activity in Europe and Central Asia is estimated to have slowed to 3.1 percent in 2018, reflecting weakness in Turkey in the second half of the year. Russia and other oil exporters maintained steady growth in 2018 as oil prices rose. Higher than expected oil production supported Kazakhstan’s 3.8-percent growth rate.

Turkey is forecast to experience weak activity and slow to a 1.6-percent pace due to high inflation, high interest rates and low confidence, dampening consumption and investment. Growth in the eastern part of the region is also anticipated to slow as large economies including Kazakhstan, Russia and Ukraine decelerate.

“Several countries in the region appear vulnerable to shifts in investor sentiment and a fall in commodity prices, as reflected by their high current account deficits and non-diversified structure of their economy. Regional growth is expected to slow in 2019,” World Bank lead economist for Central Asia Julio Revilla told The Astana Times Jan. 17.

Increases in policy uncertainty could undermine confidence in the region and impact growth. A slowdown or reversal of ongoing reforms remains a risk in many countries in the region. Tensions concerning Syria or Ukraine could trigger new sanctions on Russia affecting Central Asia and an escalation of trade restrictions could have a negative impact on the region, as the Euro area and China are the largest trading partners for all countries in the region.

“Also, a growth slowdown could decrease outward remittances from Russia and Kazakhstan to Uzbekistan, Tajikistan and Kyrgyzstan, as they have particularly benefited from those economies. With respect to remittances as a share of GDP, the Kyrgyz Republic and Tajikistan are still leading the region, at 35 percent and 32 percent, respectively,” he said.

Revilla added the Kazakh government maintained social stability by significantly intervening in the market during the economic downturns in 2008-2009 and 2015-2016.

“To reverse the current trend of productivity stagnation, the government should put forward and must be committed to decisive structural reforms to unleash the sheltered potential of the genuine private sector,” he said.

The government should give priority to three areas of reform to be able to reach its long-term aspiration to be among the 30 most developed countries in the world.

“[First], the structural policy agenda, thus, should decisively be focused on encouraging private sector entrepreneurship in non-oil parts of the economy,” said Revilla.

Secondly, the competition policy programme should strengthen competition-supporting institutions and fully decentralise the decision-making process to allow for free flow of resources and technology.

Finally, priority should be given to strengthening the investment climate.

“Kazakhstan is an attractive investment destination for a host of FDI (foreign direct investment) projects seeking to access the country’s rich natural resource base. Kazakhstan’s real challenge, however, is to attract more export-oriented, efficiency-seeking FDI. Efficiency-seeking investments provide a composite bundle of capital stock, know-how and technology that enables an economy to upgrade and diversify its production capabilities to achieve economic diversification. Attracting and retaining efficiency-seeking FDI will require the strengthening of both Kazakhstan’s international competitiveness and its investment climate,” he said.