ASTANA – Air Astana recently added the Embraer E-Jet E2, one of the world’s most fuel-efficient planes, to its fleet. The aircraft also features an image on its nose of a snow leopard, which is an elusive animal that lives in the mountains of Kazakhstan and is considered a Kazakh symbol. 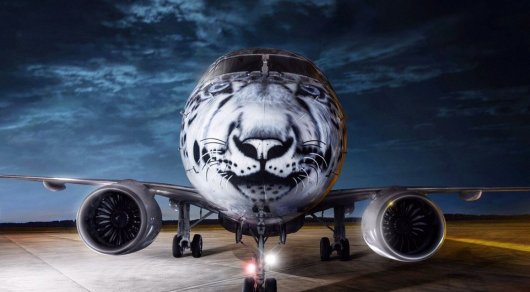 “Today is more special than our normal deliveries to Astana, because today we are delivering 190-E2. This is the very first E2 to be delivered in Central Asia and we couldn’t think of the better partner than Air Astana. I am looking forward to seeing the snow leopard on the nose flying over the mountains in Kazakhstan,” Embraer Commercial Aviation President & CEO John Slattery said during the recent announcement of the delivery of the first of five new planes.

“We have the nose of the aircraft painted in the likeness of the snow leopard and that is because Air Astana is very proud to be a supporter of Wildlife without Borders which is part of Institute of Zoology of the Ministry of Education and Science of Kazakhstan and we are financially supporting Wildlife without Borders specifically in its efforts and its initiative to preserve the habitat and grow the population, the indigenous population of this snow leopard in the wild in Kazakhstan,” Air Astana President & CEO Peter Foster said.

Featuring a snow leopard is intended to draw global attention to the threat of extinction faced by this large wild cat. Snow leopards are native to the mountain ranges of southern Kazakhstan as well as neighbouring Kyrgyzstan.

Embraer E-190-E-2 is a re-motorised and upgraded narrow-body medium-range aircraft manufactured by Embraer from Brazil.

According to Air Astana, the new aircraft has a large lengthening wing with improves aerodynamics, new on-board equipment and improved engines.

Today, Air Astana operates a fleet of 33 aircraft with an average age of 8.43 years. It operates more than 60 domestic and international routes. The company has more than 4,700 employees.

Air Astana has purchase orders in place for Boeing 787, Airbus A320NEO and Embraer 190 aircraft. These will expand the fleet to 43 aircraft by 2020.

Recently, Air Astana also announced that it is going to launch a low-cost airline, Fly Arystan, in the first half of 2019.It will operate a fleet of Airbus A320 aircraft configured to an all-economy class of 180 seats. It will operate similarly to other low-cost airline such as Easy Jet, Indigo, Cebu Pacific and Air Asia.

The new airline will offer airfares approximately half of what Air Astana offers today on mostly domestic routes. It is expected to expand into regional international routes in the mid-term.