By Dilshat Zhussupova in People on 30 November 2018

ASTANA – The Akmola Department of Cossacks serves as the region’s ethno-cultural organisation for Cossacks, who number approximately 100,000 in Kazakhstan. 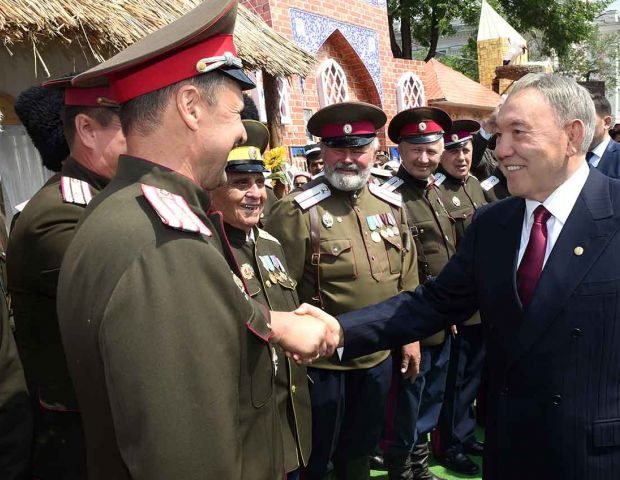 Nursultan Nazarbayev and Cossacks on the Day of Unity of the People of Kazakhstan. Photo credit: dailynews.kz.

The similar-sounding ethnonyms Cossack and Kazakh in the Kazakh language are suggestive of the way in which the ethnic groups’ history is closely tied.

Historically, Cossacks in Kazakhstan consisted of several territorial groups that were separate troops. The Ural, Orenburg, Siberian and Semirechensky Cossack troops constituted Russia’s political, military, economic and socio-cultural presence in Kazakhstan and would directly interact with the Kazakh population. Their relations were often mutually beneficial, accompanied by trade and technology transfers. At other times, relations were strained, instead accompanied by military clashes and struggles over land resources.

The country’s Cossack community has come a long way since the registration of its first organisation, Ural’s Cossack Historical and Cultural Society, in 1990. Members of the ethnic group increasingly find that the culture that they seek to preserve is really a synthesis of cultures, said the community’s leader Yegor Shadrin to The Astana Times.

“Speaking on behalf of the Akmola Department of Cossacks, many of us were born in Kazakhstan so we truly think of it as our homeland. We certainly have our own culture and seek to preserve it, but we also try to converse in Kazakh – many of us are fluent. Generally, our culture is close to that of the Kazakhs. Our roots are one and the same – Turkic,” he said.

Community members preserve their culture by researching historical facts and their great grandfathers’ stories and taking part in national songs and dances. Still, Cossacks and Kazakhs are likely to spend a particular day of the year in much the same way.

“New Years is the most important celebration for us and for many others. It is a big holiday during which, among other things, we go to Church and eat our national dish of pelmeni (dumplings). Without the latter, a New Year’s celebration is incomplete,” he said.

The Akmola Department of Cossacks was recently registered in October, having previously been a part of the World Union of Cossack Atamans.

“I believe that we are one of the first, if not only, ethno-cultural organisations to have formed a department just for the Akmola region,” noted Shadrin. “We are now establishing a Muslim Department of Cossacks, the first in the northern region.”

Its mission is, first and foremost, to present its culture within Kazakh society.

“Our mission is in no way military-based,” he said. “We seek to show our culture, devoid of harmful stereotypes. Likewise, we wish to foster our members’ interest in Kazakh culture.”

The community leader emphasised the community-oriented nature of their projects.

“We will be submitting our suggestions to the Kazakh Ministry of Internal Affairs and regional akimat (administration) on, for instance, helping out with street patrols if necessary. We are networking in order to be invited to city-wide events, where we can present our culture to the public. We are trying to rent a place to host a youth club so that, instead of hanging around the courtyard, our youth may have a space to develop their interests and also learn about Cossack and Kazakh culture. Regarding our humanitarian work, we will be providing assistance at elderly homes and orphanages,” he said.

The department is not yet a part of the Assembly of the People of Kazakhstan but “looks forward to making its contribution if and when it is able to join,” concluded Shadrin.