By Staff Report in International on 6 November 2018 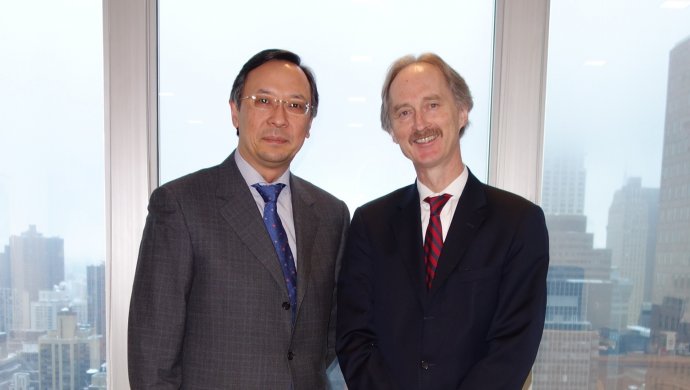 “I am personally acquainted with the well-known Norwegian diplomat Geir Pedersen who received such an important and responsible post. He assumes a new position after serving as the Ambassador of Norway to the People’s Republic of China, and before that we worked together as permanent representatives of our countries to the UN in New York during 2013-2016,” the minister said.

“Like my other colleagues from different countries who worked in the field of multilateral diplomacy, we know Mr. Pedersen as a major expert on the Middle East settlement process, which was demonstrated by him during the work as the UN Special Envoy in Lebanon in the difficult period from 2005 to 2008,” Abdrakhmanov noted.The Kazakh minister recalled that Pedersen had participated in resolving the situation in the Middle East, including Iraq, as a senior official in the political department of the UN Secretariat.

“My interaction with Mr. Pedersen fell on a period of large-scale campaign in promoting the candidacy of Kazakhstan to non-permanent members of the UN Security Council. Excellent human qualities, good advice and parting instructions from the Norwegian colleague and friend helped during the work on the Middle East and European track,” the foreign minister emphasised.

Abdrakhmanov also wished success to Norway in the campaign for election to the Security Council, and its representative the achievements in reconciling the parties in Syria, taking into account the opinions of large global and regional countries to bring peace to the long-suffering Syrian land.

“I hope to welcome the new UN Secretary-General’s Special Envoy for Syria  Mr. Pedersen at the Astana Process, where I am sure he will continue strong traditions of the constructive, effective and useful interaction of the UN with the host country of the negotiation process, Kazakhstan, as well as with the countries-guarantors, delegations of the Syrian government and the armed opposition, the observers,” the minister said.

“Staffan de Mistura is an experienced and accomplished diplomat, and in his person Kazakhstan has made another friend in the international arena. Thanks to Staffan’s personal contribution many problems were solved in difficult negotiating moments on organisational issues, the formation of de-escalation zones, finding common ground between the warring parties in developing confidence-building measures within the Astana Process,” the minister stressed.