By Saltanat Boteu in Business on 29 November 2018 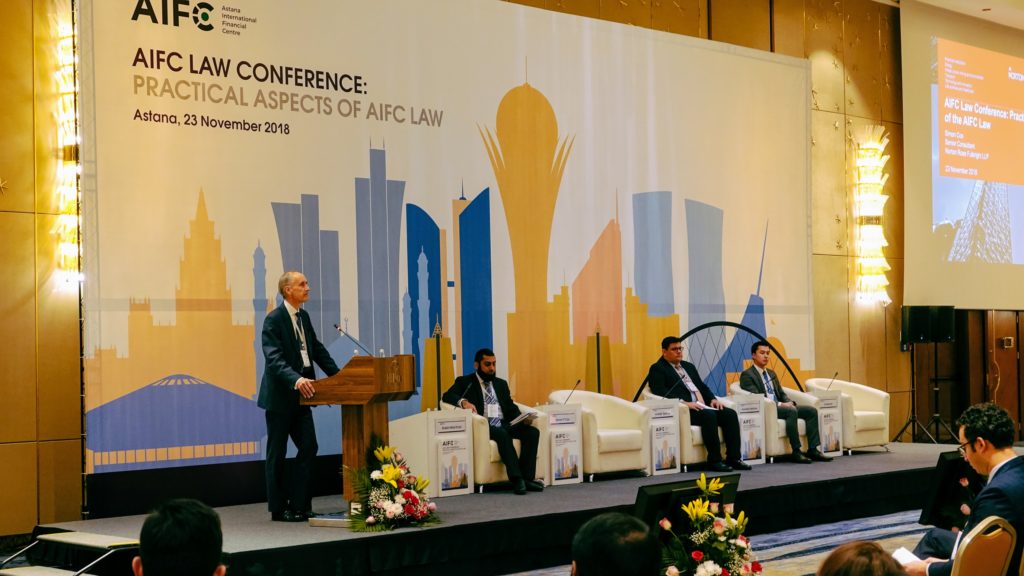 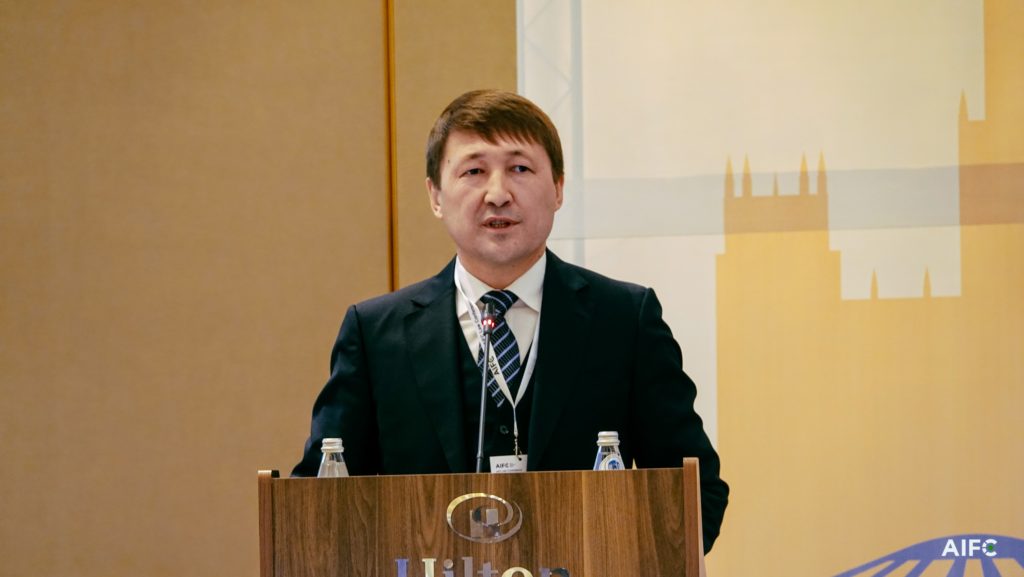 “The aim of our conference is not only to introduce the AIFC and its bodies, but to create the platform of discussion of current issues related to AIFC general legal framework, financial services framework, listings of AIX and [registration] of the AIFC companies and participants… We are aiming to meet international standards and insure high quality of services… and looking forward to your recommendations…,” the message from Kelimbetov said.

“My colleagues at the council have been working with Marat’s team on the evolution of rules and regulations. I think it is essential to pay tribute to the remarkable work done by them. We’ve got a rule book which [is] 2,300 pages… This is an evolutionary process… Everybody in this room has an interest in making this work and we all need to work together to develop these rules. They are not perfect. They will develop over time; there will be feedback after seeing how things actually work on practice,” he said. 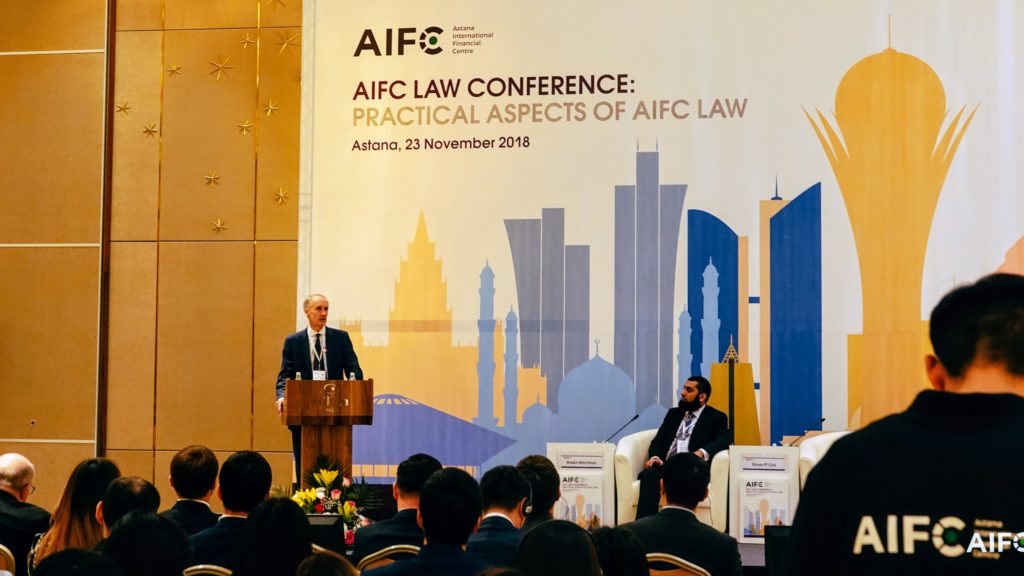 Cox added building a high quality and independent legal system are AIFC’s fundamental issues. Even though the legal framework is based on English common law, participants need not be knowledgeable or experienced in it.

“The rules are brought together without any reference to external bodies of law… The rules [also] have minimum cross references, are comparatively short and easy to read and understand and are accessible on the AIFC website,” he said.

“We are incorporating, recognising and licensing companies and partnerships… We have nearly 100 on the board so far,” he said.

“If you have rules governing regulation of banking service, does any of the Kazakh National Banking regulatory framework filter in and apply? In my view, it would be no, because since we have a framework that regulates the activity of banking in AIFC, it broadly excludes the application of the regulatory framework of the National Bank of Kazakhstan. I think it is a key principle in terms of defining the sphere of regulation and law in AIFC,” he added.

He also talked about the meaning of being a part of the AIFC, which occupies a large section of the capital’s left bank. Participants must generally conduct their business in the area, but merely being located on the grounds does not imply a company is in the AIFC. Authorised firms can also offer and sell their products and services in the country’s broader territory.

AIFC membership can be recognised in two different ways – AIFC recognition of a foreign-incorporated legal entity or a firm’s non-AIFC regulated status by the AFSA. The latter is applicable for Kazakh and foreign securities firms to become exchange or clearing house members.

AIFC Bureau for Continuing Professional Development chief Nursultan Serikbai presented a discussion on registration and privileges of AIFC participants. The step by step process is outlined at http://afsa.kz/registration-process.

In addition to the unique legal and regulatory framework and environment, he noted the centre offers a wide range of organisational company forms, drafting of rules and regulations, a simplified visa regime and special tax regime.

The last session focused on listing on the AIX as explained by AIX Chief Executive Officer Tim Bennett, who noted the Kazatomprom IPO that recently appeared on the market was an important step in developing the Kazakh economy. For international interested parties, the exchange can offer a regulatory platform, connectivity with other participants and global financial market securities.

Most of the conference participants were interested in understanding the use of international and Kazakh law in different business processes and posed the question to each panel.

“The relationship with broader Kazakhstan is critical economically and in terms of development of the law. It is not a stand-alone regime; there are many aspects such as criminal law where Kazakhstan law continues to apply,” said Cox. 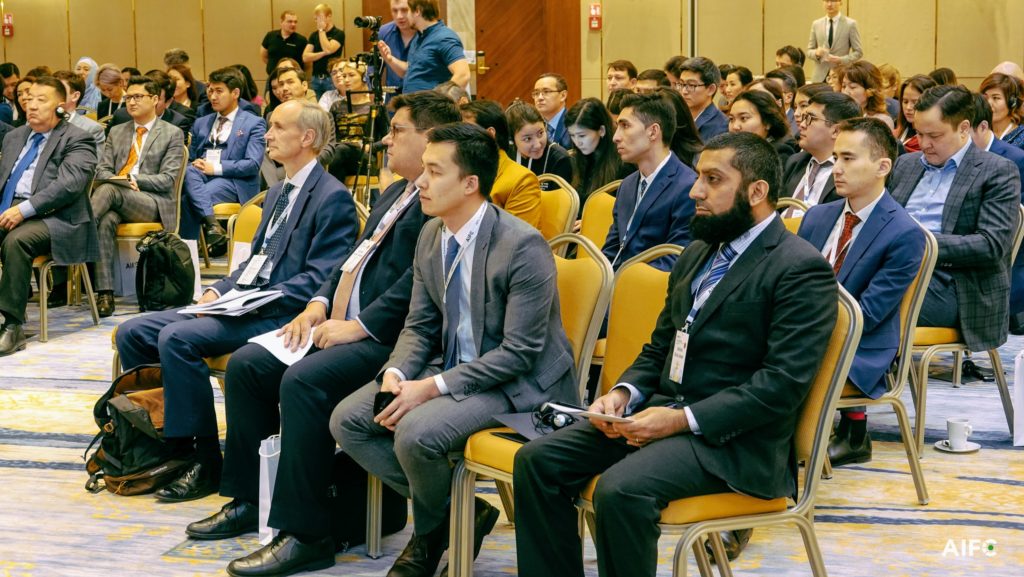 One participant shared his view on the conference and its importance for the international business community.

“People here are living in a completely different geography; this is all new to me. I’m a first timer in Astana so it’s a good opportunity to come and actually see it. This conference helped us to understand how the lawyers’ community and AIFC work here and this gives us good insight into how we can support them… I feel good about it; they are reaching not only in Kazakhstan, but also the entire region. Someday, [I want to] make my contribution,” said Faruh Saad, of Dubai.