By Dilshat Zhussupova in Business on 11 October 2018

ASTANA – The World Bank agreed at an Oct. 4 agricultural roundtable to provide a long-term $500 million loan and consulting to develop Kazakhstan’s agricultural sector. 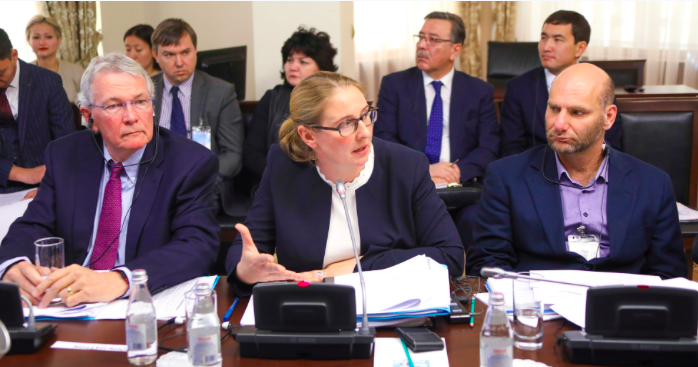 “We are ready to finance the construction of modern farming stations and provide technical support. The final terms of the loan and its purpose will be determined after discussing proposals from the government,” said Permanent Representative of the World Bank in Kazakhstan Ato Brown at the event.

At the roundtable, Brown presented the 2017 World Bank review on Kazakhstan’s private sector. He noted the importance of developing traditional livestock industries, such as beef and sheep farming, given the substantial meat consumption potential in Russia and China.

Experts also shared their experience in creating a food traceability system for livestock products, which could contribute to the development of Kazakhstan’s meat sector and export potential. Such systems have been developed with the support of the international financial institution in Uruguay and Brazil.

Kazakhstan’s state programme on beef farming development until 2027 was held in high regard by the institution. Brown commended the governmental support allocated towards the modernisation and efficient use of agricultural resources.

“We discussed [the beef farming programme] at length with businesses, regions and international organisations such as the World Bank and Asian banks, after which it was developed and submitted to the government. In addition, we have a programme on intensive animal husbandry, which includes dairy cattle breeding, poultry farming and pig breeding. We have additionally prepared a programme related to irrigated agriculture and are now preparing programmes for sugar, fish farming and natural parks,” said Deputy Prime Minister and Minister of Agriculture Umirzak Shukeyev.

The government’s primary programme, said Shukeyev, remains the development of beef farming. According to the minister, Kazakhstan has the appropriate conditions, pastures and human capital for the programme’s effective implementation.

In particular, Kazakhstan’s comparative advantage is its low cost for meat production. The International Finance Corporation representative Rolf Berndt suggested that when the country evolves into a more mature and competitive beef exporter, Kazakhstan may progress in the world market by competing with Australian and Brazilian suppliers.

At the end of the discussions, the representatives expressed their readiness to finance the development of Kazakhstan’s agricultural sector and agreed to implement joint measures to promote the country’s agricultural products in China’s markets.