By Malika Orazgaliyeva in International on 11 October 2018

ASTANA – While visiting Kazakhstan Oct. 9-10, President of Serbia Alexander Vucic met with President Nursultan Nazarbayev, took part in the Kazakhstan-Serbia Business Forum and addressed the Sixth Congress of Leaders of the World and Traditional. 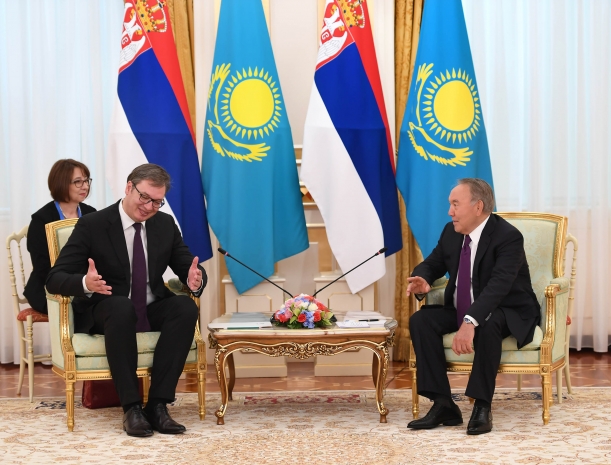 According to Nazarbayev, Kazakhstan and Serbia have dynamically developing relations.

“Our meetings demonstrate that the two countries are interested in deepening mutual cooperation. First of all, we need to focus on deepening trade and economic cooperation. Our economies complement each other, we are ready to expand the range of products supplied,” he said.

Nazarbayev named priority areas for cooperation between Kazakhstan and Serbia.

“We have set new tasks for the Intergovernmental Commission on Trade and Economic Cooperation. The priority areas for cooperation include agriculture, industry, construction, transport, and energy. We are interested in creating infrastructure for accelerated delivery of goods between Asia and Europe,” he noted.

The President of Kazakhstan added that negotiations on the creation of a free trade zone between the Eurasian Economic Union (EAEU) and Serbia are underway.

The sides discussed regional and international issues. Nazarbayev thanked Vucic for taking part in the Sixth Congress of Leaders of World and Traditional Religions held in Astana on Oct. 10-11.

Him“I hope we will strengthen our cooperation in the future and increase our commodity turnover because there is a good foundation of unused potential. We would like you to open the Kazakh Embassy in Belgrade. It is our big request,” Vucic told Nazarbayev.

“I would like to express my gratitude for your solid position in the protection of vital and national interests of Serbia, especially those concerning Kosovo issues. Thank you very much for your support of our territorial integrity, independence and sovereignty,” he added.

In Vucic’s view, Astana is the most modern city in Central Asia.

“I am delighted with the success achieved by Kazakhstan thanks to President Nazarbayev, his clear vision, energy and dedication. I sincerely hope that you will achieve your goal, defined in the Strategy Kazakhstan 2050, for Kazakhstan to join the 30 most developed economic of the world,” Vucic said, as he addressed the joint press conference together with Nazarbayev.

A number of documents were signed following the forum between the two countries’ ministries and companies.

At the religious forum, Vucic pointed out that it was necessary for believers of traditional religions to understand that “everyone has one God, believes in similar things and has the same values.”

“This is a good opportunity for people from different parts of the world to come and try to exchange attitudes that influence having more rational relationships in the world, simply for peace to be the one that will prevail. I am honoured to be able to attend the gathering on behalf of Serbia and say a few words,” Vucic said.

In the period between January and July 2018, the turnover reached $16.8 million.

There are 33 Kazakh-Serbian joint enterprises functioning in Kazakhstan’s construction and trade sectors.