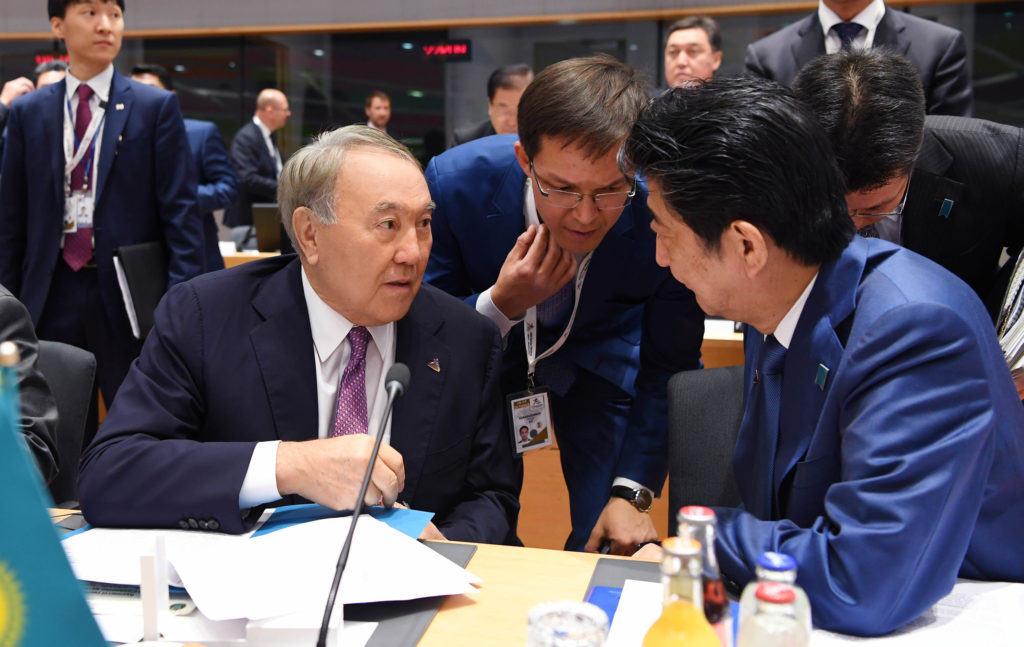 “The number of conflicts is growing in different corners of the world. Due to sanctions and trade wars on the rise, international politics have become tense,” Nazarbayev began his speech at the plenary session on Oct. 19, urging ASEM “to effectively solve these issues.”

He compared the current confrontations to the Cuban crisis in 1962 as NATO is now expanding its frontiers to the borders of Russia.

The global community should call upon the United States, Russia, China, and the European Union “to realise their responsibility to humankind and look for the path to resolve international confrontations,” as a condition to promote inclusive sustainable productivity, Nazarbayev said. “Regretfully, the international community is falling short of such dialogue and mutual understanding.”

The Kazakh President noted that unless major countries start a dialogue, confrontations will escalate problems in places such as Syria, Ukraine, and international terrorism will continue threatening the world as long as the proliferation of ballistic missiles remain possible.

“Everyone is aware that national leaders before us have managed to find understanding after World War II, at the time of bloody wars and in combating terrorism. This is also the demand of this time,” he told the gathering, which was themed Global Partners for Global Challenges.

“I call upon leaders of the above mentioned countries (the U.S., Russia, China, and the EU) to get together to discuss these burning problems. Perhaps a UN special session should be called for this matter. If need be, we stand prepared to offer Astana as a platform for such a meeting,” he declared reaffirming Kazakhstan’s readiness to cooperate in countering the global challenges facing Europe and Asia.

The two-day summit included 51 high-level officials, such as Prime Minister Shinzo Abe of Japan, President Emmanuel Macron of France and Prime Minister Dmitry Medvedev of Russia, who discussed trade, digitisation, security, climate change and non-proliferation as well as ways to cope with protectionism and tensions between superpowers.

President Nazarbayev also met separately on the sidelines of the gathering with European and Asian political and business leaders.

He discussed Kazakh-Belgian political, economic, cultural and humanitarian cooperation with King Philip of the Belgians.

Macron and Nazarbayev also met for the first time since Macron took office. This year marks the 26th anniversary of Kazakh-French diplomatic relations, the 10th anniversary of their strategic partnership agreement. Dozens of French companies are working in Kazakhstan, and bilateral trade can reach $5 billion, Nazarbayev told his French counterpart at the start of the meeting.

“I am confident this meeting will bring Kazakh-French ties to a new level,” he said.

Nazarbayev has also held talks with Prime Minister of Japan Shinzo Abe and President of the Republic of Korea Moon Jae-In, Chairman of the State Council of the People’s Republic of China Li Keqiang, the Prime Ministers of Russia and Italy, Dmitry Medvedev and Giuseppe Conte. He also talked with leaders such as Chancellor Angela Merkel of Germany, Prime Minister Mark Rutte of the Netherlands, President Dalia Grybauskaitė of Lithuania and others.

At a meeting with 25 major European companies held earlier on Oct. 18 at the Palace of the Academies, Nazarbayev met Deputy Chairman of the Board of the Association of World Trade Centres (WTCA) Rolf Draak and Director of Corporate Services & Finance at Nest Investments Holdings Ltd Mehran Eftekhar to discuss cooperation with the Astana International Financial Centre.

Speaking to the European business leaders, Nazarbayev elaborated on existing business relations. “The most important trade, economic and investment partners of Kazakhstan,” said the President, describing European states, “have invested about $180 billion in Kazakhstan; The European Bank for Reconstruction and Development has financed projects totalling more than $8 billion.”

Trade between Kazakh and European countries has been growing steadily with approximately 3,000 businesses operating in the country now. Alstom, Linde Group, Air Liquide, Danon, Vicat, Heidelberg Cement are some of them.

“Five railways and six international highways that connect China and other Asian countries with Europe through Russia, the Caspian and Black Seas, as well as Iran and Turkey, pass through Kazakhstan. Now, cargo delivery to Europe from China via Kazakhstan, and back, takes four times less time than delivery by sea,” Nazarbayev said adding that almost 5,000 kilometres of motorways have been built and another 20,000 kilometres will be built by 2021.

The Kazakh leader further noted that citizens of 62 countries, including 33 European states, do not now need a visa to visit Kazakhstan.

He invited companies to invest in projects under the Digital Kazakhstan state programme, explore opportunities at the innovation clusters of Nazarbayev University, the Almaty-based Park of Innovative Technologies, as well as the Astana International IT Start-up Hub scheduled to launch Nov. 5. Potential investors can benefit from special visa, labour and tax regimes, he noted.

He also explained the benefits of the planned initial public offerings (IPOs) of large Kazakh companies working in industries from oil and gas to national air and railways carriers. He said the state will seek to maintain no more than 10-15 percent of the economy in its hands, and will move with IPOs within the next few years.

President Nazarbayev also touched on efforts to use technology to increase the productivity of the agro industry and promote Kazakhstan’s history and landscape as tourist attractions. He noted the experience of European businesses in these fields as serving as good foundations for mutually profitable cooperation going forward.