Congress of religious leaders kicks off in Astana, discusses role of religion in building peace

ASTANA – The Sixth Congress of Leaders of World and Traditional Religions kicked off Oct. 10 in Astana gathering more than 80 delegations, representatives of Buddhism, Christianity, Hinduism, Islam, Judaism, Taoism and Zoroastrianism, representatives of religious and public organisations and high-level officials, including President of Serbia Aleksandar Vucic, who was on his official visit to Kazakhstan.

The congress, convened for the first time in 2003, is organised every three years and this year marks the 15th anniversary with the topic “Religious Leaders for a Safe World.”

Opening the third Council of Religious Leaders one day prior, Congress Secretariat Chair and Kazakh Senate Chair Kassym-Jomart Tokayev noted the potential of the Astana meetings to address old problems and with the “new political era, with all its geopolitical, legal, international and ideological changes,” the need to bring new meaning to the council activities.

“The Syrian conflict, mass killings of believers, destruction of cultural sites, religious objects and world heritage monuments in different parts of the world is yet another threat to global stability and security. The United Nations Charter, which prohibits the use of force or threat of using it towards territorial integrity and political independence of any state is being forgotten,” said Tokayev, addressing religious leaders. 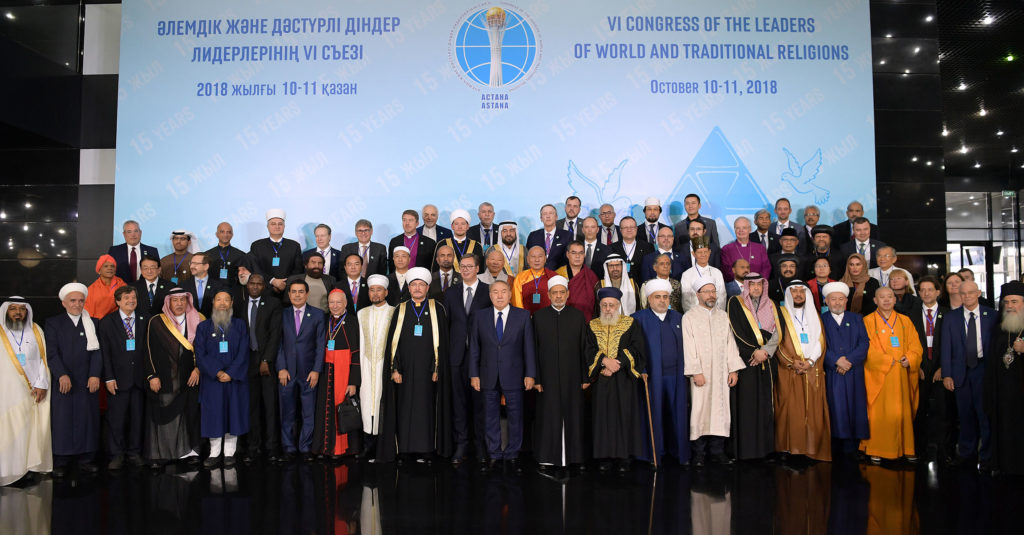 In his opening remarks at the congress, Kazakh President Nursultan Nazarbayev, who stands behind the initiative, noted the turbulent time that the world is currently facing, in what he describes as the “sinister circle of mutual distrust, hostility and conflict.”

“All of us, including politicians, and religious leaders, cannot but be concerned by the use of sanctions, inter-religious and intra-religious conflicts, trade wars, environmental pollution. Inter-civilisational conflicts look absurd against the backdrop of scientific and technological progress. But at this very moment the future of humanity is being shaped and how we will pass it to future generations remains the main civilisational problem,” he said, addressing the plenary session.

The role of spiritual leaders, he noted, is key to addressing this problem.

“You represent religions, which are all unique. Each religion, however, fully recognises universal human values, the unity of moral principles. I am sure that it is the spiritual principle, woven from a multitude of beliefs, faiths and ideals that should facilitate the unifying processes. Faith in the benevolence of the Almighty rests on a sincere desire for peace-making. A person with conflicting thoughts on this issue will never become a true believer,” said the Kazakh President.

The first deals with the role of technology in spreading the ideas of peace and to this end, he proposed to set up an information portal that will work on methods to withstand various forms of radicalism and violence.

“Each believer will be able to contact the leaders of religious organisations and confessions with a question or a suggestion and receive feedback,” said Nazarbayev. 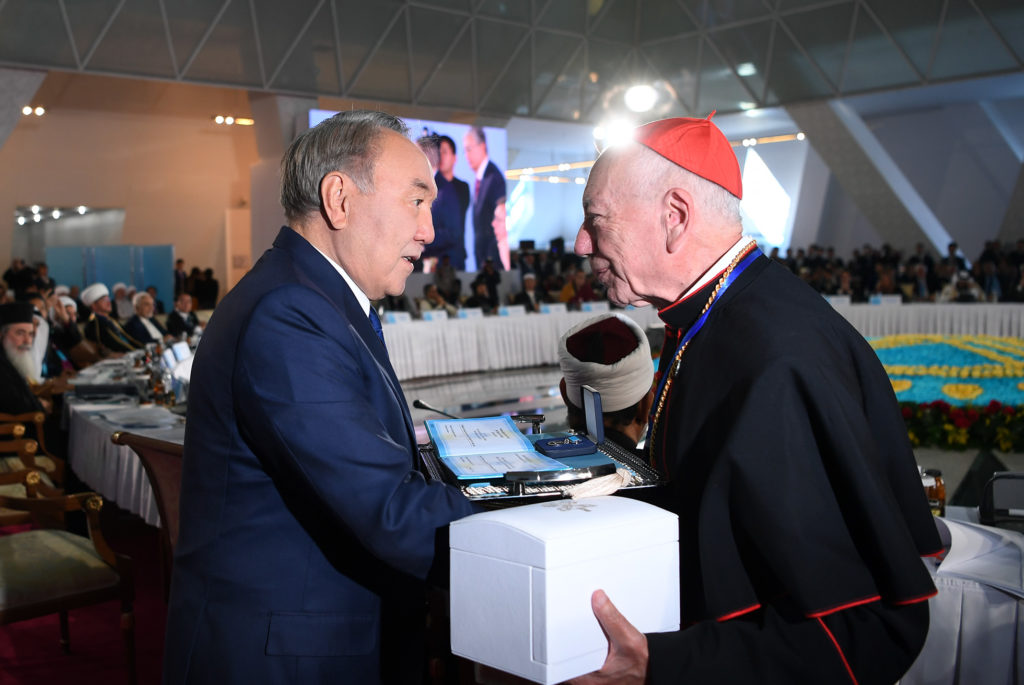 Cooperation should also usher in a new level, he said.

“We are talking about the use of the enormous potential of spiritual leaders and religious organisations to establish a constructive dialogue between conflicting parties. I suggest to all spiritual leaders to appeal to the world community for peace and security,” added Nazarbayev.

Lack of education, with more than 750 million people estimated not being able to write or read, and poor religious knowledge are among key problems along with global tendency to militaristic thinking and division of countries into military blocs.

The participants praised the interfaith peace and harmony model of Kazakhstan, home to 18 faiths and 3,715 religious associations. Kazakhstan managed to find a “balance between ensuring national security and protecting religious freedoms,” said Nazarbayev.

Current international mechanisms are not enough to counter the threats, he added.

“No one from the generation, to which I also belong, would ever have thought that the United Nations Charter that promised to protect weak and curb others’ tendency to supremacy will become simply a paper. When this is about developing countries, Middle East, weak states deprived of self support. And that those at the vanguard of this charter and its implementation would use double standards towards nations and grant peace to those they wish and take it [peace] from others,” he said.

This century, he noted, witnessed how Islam became associated with terrorism and violence and how some groups use it to cover their “horrific acts.”

The technical potential of the region, however, is not enough to explain the rapid rise of terrorism with a “colossal power allowing it to relocate, cross border, attack and retreat staying calm.”

“We recognise that the scene is Islam and Arab platform and that players are Muslims and Arabs, but we doubt a lot that anything in this production is purely Arab or Islam. This is terrorism that committed its heinous crimes hiding behind Islam,” he said.

Terrorism, he noted, is the result of an unfair and misguided global politics that “lost its sensitivity to pain and suffering of other people.”

“Therefore, the problem is not in Muslim youth or jihad, this is the problem of injustice and marginalisation, feeling of one’s negligibility and infringement of rights or reflection of a severe psychological alienation among youth which is the result of how modern civilisation lacks religious morality and norms,” he added.

He believes conflicts and wars stem from an inability to listen to each other.

“Instead of listening what problems each side has, we try right away to make the sides come back to peace. All conflicts are, as a rule, a result of inability to listen to the other side. In many cases, conflicting sides do not agree whatsoever to listen. It is always surprising that everything changes once they open their ears and start listening,” he said.

The Kazakh initiative is, therefore, of paramount importance.

“The initiative of President Nazarbayev is so important to gather religious leaders at one table and try to listen to each other. We have the responsibility to serve personal example of dialogue. It is not always possible to agree, yet we should know how to open our ears and listen,” said Yosef.

Keeping religion and politics separate is equally important, said Francesco Coccopalmerio, head of Vatican’s Pontifical Council for the Interpretation of Legal Texts, who received the newly established award from Nazarbayev on behalf of the Pontifical Council for its “contribution to an interfaith dialogue and huge support of the congress.”

“Religion and politics in its essence seek to ensure welfare of an individual and society. To avoid any ambiguity and mutual instrumentalisation, religion and politics should remain distant. Only this way is there an opportunity for these two phenomena to reach an effective cooperation for the sake of the common good,” said Coccopalmerio.