By Aidana Yergaliyeva in International on 30 October 2018

ASTANA – Spanish Ambassador David Carriedo, who began his diplomatic mission to Kazakhstan on August 21, spoke with The Astana Times about the agenda for his three-year term to strengthen relations between the countries with an emphasis on education and the economy. 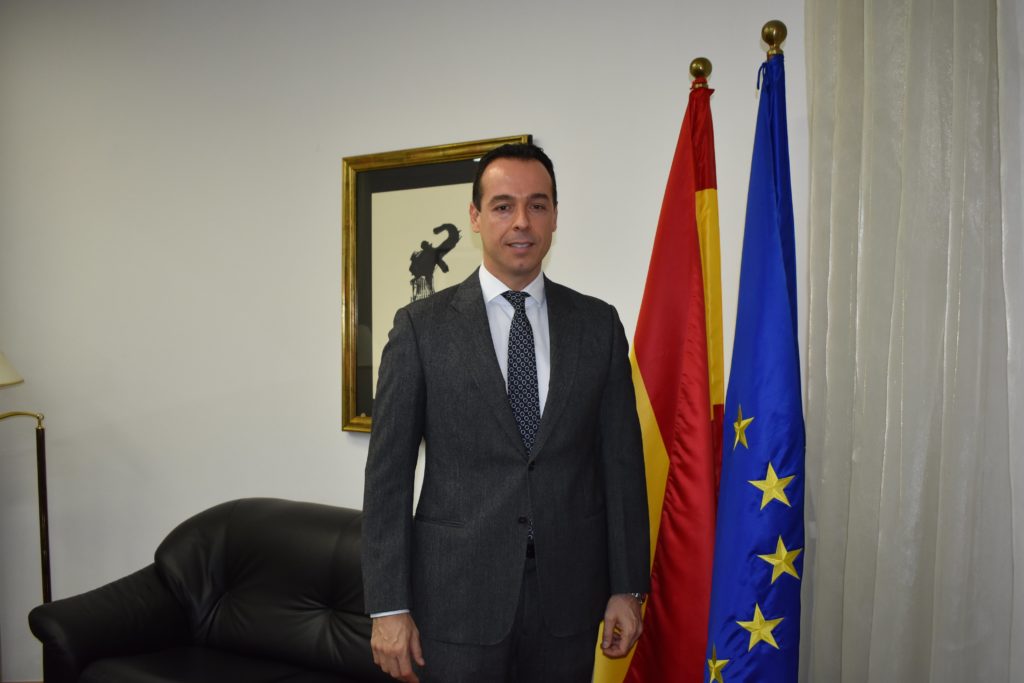 Educational cooperation entails specific attention to make quality Spanish language education accessible to Kazakh citizens. As the second most spoken language in the world, knowing Spanish is an asset that advances one’s competitiveness in the globalised environment. Making the language more accessible for Kazakhs is of equal interest to both governments.

In order to meet the growing demand, Carriedo is working to open a branch of Cervantes Institute, the public institution created by Spain in 1991 to promote Spanish language and culture worldwide. He noted the importance of increasing the number of native Spanish speakers teaching in Kazakh universities.

“I am going to work on this. If not a full-fledged branch of the institute, then the so called Aula (classroom) Cervantes which is a smaller facility but where students can study, pass exams and gain their titles,” he said.

Carriedo sees great potential in education and feels both countries should benefit from an increase in exchange programmes for research university students and teachers.

To strengthen bilateral economic relations, he is working to launch direct flights to Spain and on speeding up visa issuing procedures.

“This will expand the cooperation in every sense,” he said.

His strategy to speed up visa procedures include moving the embassy to a bigger office, thereby increasing its capacity for receiving visitors. In addition, Spanish visas might be issued, in certain cases, for longer terms and multiple entries, which should dramatically increase tourism between the countries.

“We always say that tourism is our oil, amounting to close to 15 percent of our gross domestic product. Almost 173 billion euros (US$196.74 billion) per year; that is more than Kazakhstan’s GDP, to put it in perspective,” he added.

“Spain is not only about beach, sea and sun,” he said.

One of Spain’s main attractions is the wealth of United Nations Educational, Scientific and Cultural Organisation (UNESCO) sites, with 47 registered zones. The Kazakh government frequently refers to its eagerness to learn from the best practices in the world and Spanish management of historical buildings and cultural sites is no exception.

Carriedo noted the countries’ tourism departments will soon negotiate on future cooperation. The combination of direct flights and visas should increase not only the inflow of Kazakh tourists, but also trade and investment.

He is particularly concerned about Spain’s big trade deficit with Kazakhstan. According to embassy statistics, bilateral trade is approximately 1.7 billion euros (US$1.95 billion) annually, of which Kazakh exports to Spain amounted to 1.55 billion euros (US$1.78 billion) in 2017 (including oil exports at 94 percent of the total).

Spain’s exports to Kazakhstan were approximately 164 million euros (US$186.53 million), the bulk of which was textiles and machinery goods.

He suggested the Spanish Institute of Foreign Trade will organise exhibitions to promote the country’s goods.

“We are a very competitive country when it comes to exports of agro-food products, materials for construction and pharmaceutical products and, as I said before, machinery goods. So, we intend to increase our flows of exports into Kazakhstan in order to compensate a bit this huge trade deficit that we hold,” he said.

Negotiations to increase the presence of Spanish businesses took place at the fifth business council and eighth intergovernmental commission on economic and industrial cooperation held Sept. 28 in the Kazakh capital.

“We share this message with our Kazakh counterparts, [advise] which projects can be of interest to our companies and are competitive and submit their proposals in the tenders. There are about eight or nine Spanish multinational companies that are participating in the most advanced infrastructure projects in the world. We want to be present here, too,” said Carriedo.

Some Spanish companies are currently showing interest and some, like the engineering company Idom, is already involved in the project for Almaty tramways, operation of which was suspended on Oct. 31, 2015. The project on upgrade, geared towards the system’s sustainability had started in 2013 and will be launched soon.

“These [leading Spanish multi-national] companies are ready to contribute to the modernisation of Kazakhstan’s economy and participate in the infrastructure projects organised by the government, particularly PPP (private-public partnership) projects,” he noted.

Interest in tightening bilateral relations is significant on both sides. Spanish companies such as MAXAM, Talgo and Inditex (Zara) are already successfully working in the Kazakh market.

“Kazakhstan can serve as a hub bridge between Europe and Asia. It is a good gateway to the Eurasian Economic Union. We definitely find opportunities in the area of production of agro-food products textiles, chemicals and, certainly, infrastructure,” he added.