By Abira Kuandyk in Business on 4 September 2018 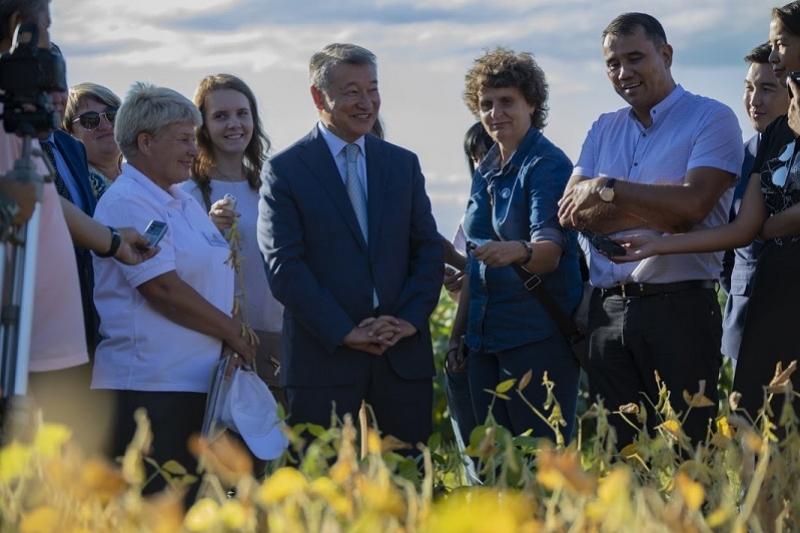 The experimental farm in the Glubokovsky district noted sunflower is the region’s main oilseed crop, accounting for up to 70 percent of the oilseed sowing area and 85 percent of the gross harvest. Hybrids developed by its breeders have a number of advantages over other varieties, as they have a 15-20 percent higher yield potential, high seed oil content and are herbicide-resistant, noted the breeders.

The farm is focusing on creating early ripe hybrids due to the region’s climate conditions, said head of oilseeds department Olga Gavrilova.

“There are 40 perspective varieties presented here. We are preparing them for state testing. We targeted not only East Kazakhstan, but the whole country. Every year, we have one-two hybrids on Kazakhstan’s market. There are 11 hybrids entered in the state register and six are being tested. We are entering the Russian market as well and three of our hybrids are being tested,” she said.

Natalia Grigorchuk, a Ukrainian specialist who has been involved in breeding for 27 years, spoke about promising soybean varieties.

“We create ultra-ripe, early ripe and immature groups. The duration of the growing season lasts 90-110 days. East Kazakhstan region’s nature and climatic conditions are ideal for cultivating such varieties. The yield of these varieties is more than two tonnes per hectare. The chemical composition is also unique – 39 percent protein and 22 percent oil,” she said.

“Such soybean varieties can be used both in the feed and food industries. They can be used for children’s nutrition, for lactose intolerant ones. Varieties with high seed oil content can be used in the oil industry. All varieties will be transferred to state testing,” she added.

Akhmetov noted the innovative approach is essential for changing the structure of seed production.

“I am pleased with this innovative approach. To date, our region involves 40 percent of spring crops and 30 percent of oilseed and fodder. It corresponds to the Canadian model. Scientific work is currently being undertaken to develop new varieties of soy, with an effective period of vegetation of up to 90 days. Silage сrops are extremely important for the development of livestock,” he said.