By Dilshat Zhussupova in Central Asia on 26 September 2018

ASTANA – Kazakhstan and Uzbekistan announced plans to create a joint communications satellite serving the Central Asian states at a Sept. 21 international conference in the capital. The Kazakhstan Institute for Strategic Studies (KazISS) and Uzbek Institute for Strategic and Interregional Studies also signed an updated memorandum of understanding at the inaugural meeting of the Kazakh-Uzbek expert council. 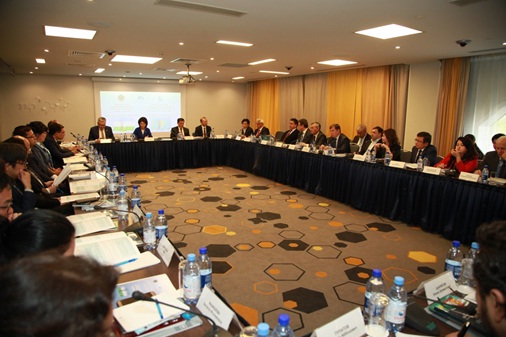 The conference “Partnership prospects between Kazakhstan and Uzbekistan in the new geopolitical and geo-economic conditions” was organised by KazISS, the Uzbek institute and the Friedrich Ebert Stiftung office in the capital.

In her opening speech, KazISS director Zarema Shaukenova noted Kazakh-Uzbek cooperation is based on a common historical past, linguistic and territorial proximity, strategic partnership and trust, all of which contribute to the parties’ confidence and optimism in their relations.

“Uzbekistan and Kazakhstan are close neighbours and time-tested partners. Our countries have always had friendly and constructive relations. The history of our peoples is one, cultural and religious values are common, and traditions and customs are similar,” added institute director Vladimir Norov of Uzbekistan.

The joint communications satellite will serve both countries, as well as others in the region. Uzbekistan currently relies on satellite communication services from foreign nations, said Kazakh Ministry of Defence and Aerospace Industry department for international military-technical cooperation director Aslanbek Syrlanov.

Regarding broader Central Asian cooperation, Kazakhstan proposed creating five satellites for Earth remote sensing, which would be able to photograph objects up to five metres.

“Each Central Asian state will operate one satellite and have the ability to receive data from all five satellites,” said Syrlanov. “This will allow each of us to receive pictures and up-to-date information at a high speed every day.”

Additional ideas and proposals were voiced during the plenary sessions and council meeting in an effort to deepen the partnership between the two leading think tanks and strengthen Kazakh, Uzbek and Central Asian cooperation.

At the first plenary session, experts discussed economic measures of bilateral cooperation. They touched on prospects of trade, economic, horizontal and cross-border cooperation, institutionalising regional cooperation projects, the role and positioning of the two countries in the new international division of labour and various international transport and communication projects.

At the second plenary session on the historical and cultural basis for cooperation, the experts discussed the cultural code of neighbouring nations, migration, religion, the two countries’ modernisation processes and the policy of openness.

The council meeting involved a dialogue on the role of expertise and analysis in development strategies, education and science infrastructure, the knowledge economy and the role of Kazakhstan and Uzbekistan in sustainable development in Central Asia.