By Elya Altynsarina in Nation on 10 September 2018

ASTANA – Kazakh President Nursultan Nazarbayev opened the fourth session of the Kazakh Parliament Sept. 1 at the joint sitting of the Senate and Mazhilis (lower house of Parliament). He praised Parliament members’ work and collaboration with the government. 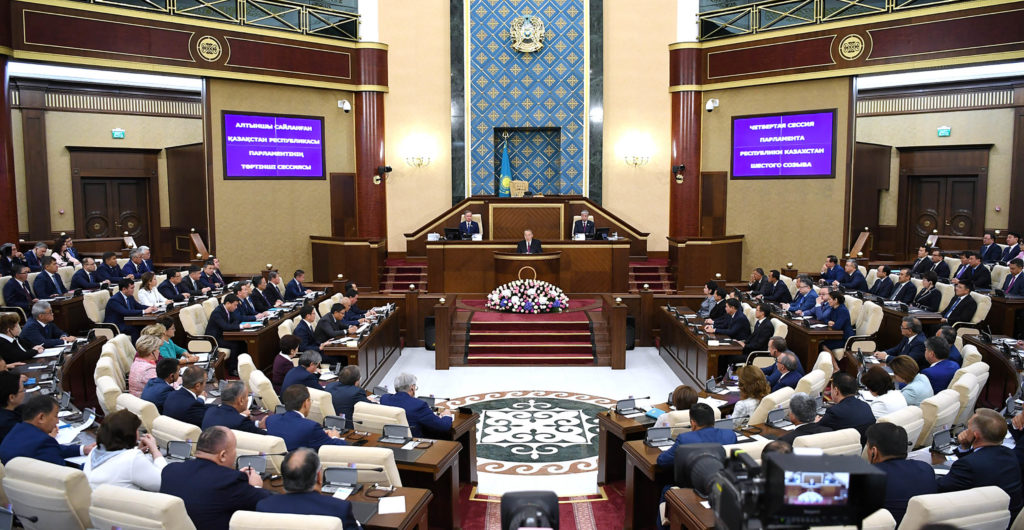 Heads of state authorities of all branches, public figures, leaders of religious associations, NGOs as well as local and international media attended.

“Last session, the Parliament adopted 87 laws, including the basis for Five Social Initiatives that I have announced,” Nazarbayev noted.

According to the President, these initiatives will improve the standard of living for six million citizens.

“GDP grew at 4 percent, the inflation rate dropped to 5.9 percent, the volume of investments increased by 24 percent. Conditions for economic and social modernisation are created and non-resource-based sectors, such as manufacturing, transportation and services, became the driving force of growth thus outstripping the global average growth rates,” he said.

He also underlined seven areas of social and economic development on which the state and Parliament need to focus in the coming session. Among them is to continue legislative work to advance sustainable socio-economic development, which would include, among other measures, a new basis for involving self-employed citizens into the changing models in public healthcare, social insurance and pensions.

“It is especially important as we transition towards compulsory healthcare insurance and introduce a guaranteed volume of medical care and are planning to improve public health, corporate governance in medical organisations,” Nazarbayev noted.

He also said Kazakhstan needs to improve housing and utility services by increasing the transparency of interaction between residents and service companies as well as by regulating monopolists.

The head of state also told the Parliament that he has instructed the government to draft a state programme for tourism development until 2023 and it will need to be reviewed before the end of 2018.

He added that the Parliament currently is considering an important bill on procurement in public and quasi-public sectors aimed at simplifying the procurement process, reducing corruption risks and freeing up funds for priority tasks.

Another field requiring legislative update, said Nazarbayev, is the agro-industrial complex including, the introduction and/or development of insurance, agricultural receipts, credit partnerships and veterinary control.

The last two points of Nazarbayev’s address touched on cultural and historical heritage.

He said a bill is needed to protect the historic and sacred objects identified under the Rukhani Zhangyru (Modernisation of Kazakhstan’s Indentity) programme.

He also said declaring Shymkent a city of national significance and establishing a new administrative centre in the Turkestan region symbolises the historic renaissance of the area.