ASTANA – Discussion platform PaperLab hosted a Sept. 5 talk, “Reform of the Kazakh Ministry of Internal Affairs: How to shape citizen-oriented police?” with the support of the Soros Foundation-Kazakhstan. 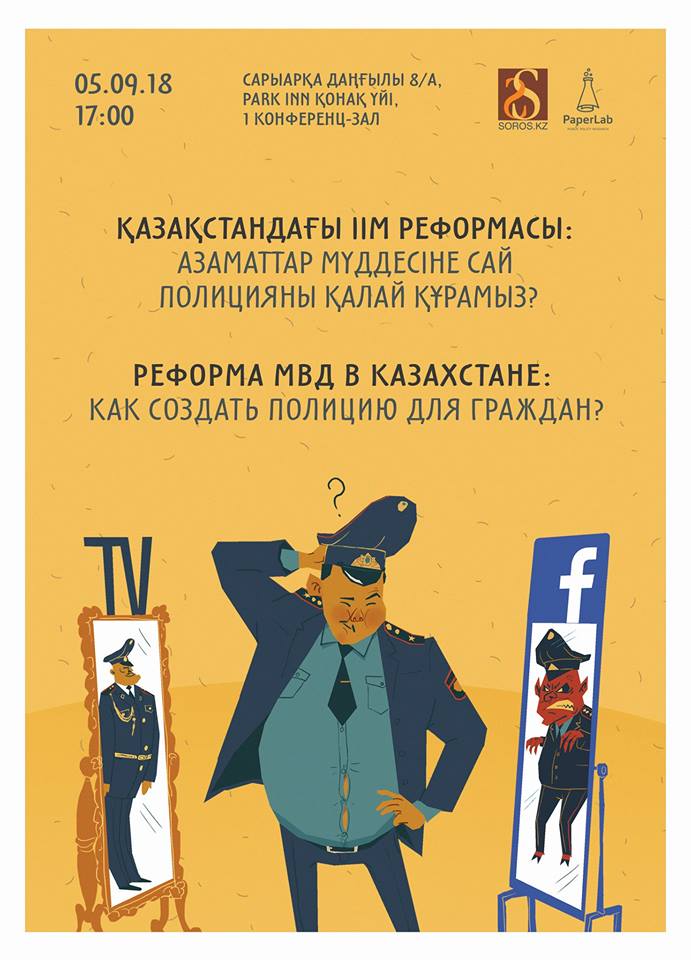 Invited speakers included operational leader of the European Union project Enhancing Criminal Justice in Kazakhstan Saule Mektepbayeva, representatives of the civil initiative For the Reform of the Kazakh Ministry of Internal Affairs Nazgul Yergaliyeva and Dimash Alzhanov and Washington, DC-based National Defense University professor Erica Marat. Among the panelists invited to listen and respond to any issues raised were Mazhilis (lower chamber of Parliament) members Kanat Mussin and Vasiliy Oleynik.

The public has increasingly been demanding better police work. Following the July 19 stabbing of 25-year-old Kazakh figure skating medallist Denis Ten in Almaty, these sentiments were formalised into a specific request to reform the Kazakh Ministry of Internal Affairs. Rather than functioning as a predominantly punitive body, citizens behind the initiative want a police force that ensures their security.

The project office for the reform of the ministry has been functioning since 2017. In September, the nation’s Security Council is to closely consider the modernisation of Kazakhstan’s law enforcement agencies, after which it will become clear what changes will be undertaken in the ministry following the public outcry in July.

The purpose of the PaperLab event was to provide a platform for authorities and the public to hear each other out. The main agenda included discussing the image of law enforcement officers in society, citizens’ trust in police, the public’s concerns regarding the reform of the law enforcement system, the outcomes of previous reform efforts by the ministry and steps that may be undertaken by both the public and the authorities.

The discussion kicked off with the presentation of proposals by the project, For the Reform of the Kazakh Ministry of Internal Affairs, which are accessible on the Facebook page @reformamvdrk.

The proposals were released Aug. 29 and were the product of more than 10 group discussions since July 26. The group effort was carried out on a voluntary basis by lawyers, human rights defenders, economists, journalists, business people, informational technology (IT) professionals, public figures and other engaged citizens.

“We are an informal group, gathered after a tragedy known to everyone,” said Alzhanov. “Our group began to grow rapidly, and just in three days we collected over 15,000 participants and received over 300 proposals for the ministry’s reform. It became obvious to us that it was not simply a question of police modernisation, but a comprehensive reform of the entire system.”

The proposals were consequently laid out in a working document and framed according to best international practices in criminal justice reform. The presented document was divided into three sections, which centred on structural reform for the formation of a service-oriented police model, a new human resources (HR) policy and accountability, transparency and responsibility of the police.

At PaperLab’s event, Kassymkhan Kapparov, director of the Bureau for Economic Research of Kazakhstan, a private institution, emphasised placing Ten’s death, the catalyst for the public demand for reform, as part of a bigger picture.

“As an economist, I recognise that theft is a social crime,” he said. “This isn’t just about two criminals, but rather about an economic downturn, social inequality, social stratification and unemployment, all of which unfortunately led to such a tragic outcome. Given that the oil price will likely remain low and that our budget expenditures will keep growing, the given problem is a long-term one. Simply addressing the problem in a quantitative manner, by increasing the number of police or their salaries, will not address the core problem. That is why a superficial fix won’t do, and a comprehensive one is necessary.”

Given the Soviet legacy in Kazakhstan’s criminal justice system, the discussion also involved analysing the police as an institution and reviewing what functions are actually appropriate for them.

“For over a decade, the image of the police has been formed mostly by the media. By opening any website today, you will come across a negative depiction of them,” added Mussin, referring to the public’s perception of the police. “Still, it should be noted that these kinds of police officers are actually few and far between.”

The audience was also eager to weigh in on the issue, and many had their own experiences with law enforcement agencies to share.

“A person who has been a victim of a given crime often has no idea what steps to take,” said Ne Molchi (Don’t Be Silent) movement leader Dina Smailova. “We have long called for clear and accessible instructions to be developed on what investigators and injured parties should do, step by step.”

The consensus after the discussion, from the authorities and the public alike, was that comprehensive reform was necessary, since disagreements mostly revolved around the means and areas of priority.