By Dilshat Zhussupova in Nation on 1 September 2018

ASTANA – The Astana Debate Community made history at the 2018 European University Debating Championship (EUDC) in Serbia, with a team from Kazakhstan reaching the English as a Second Language (ESL) quarterfinals for the first time. 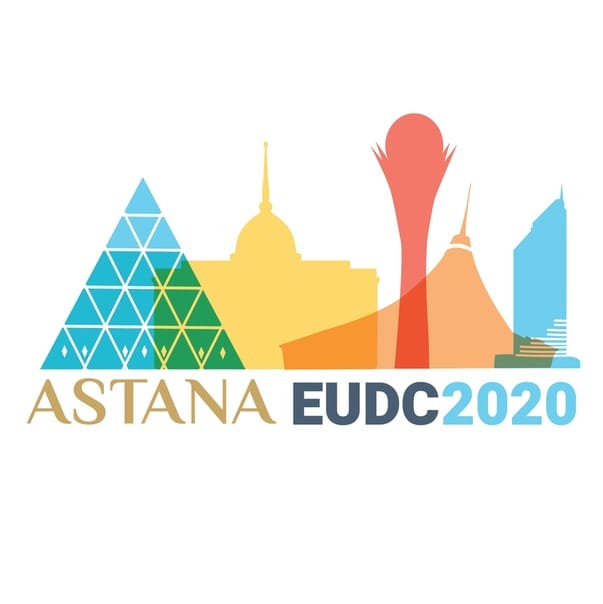 An annual English-language debating tournament for teams from European universities and held in the British Parliamentary Debate format, the competition this year proved intense in the open and ESL categories, with teams from Tel Aviv University taking home the honours in both categories.

Prior to their break at the quarterfinals, Nazarbayev University alumni Aigerim Shadeyeva and current student Dauren Binazarov began debating at their university’s Nomad Debate Club four and five years ago, respectively. They were first partnered up to represent their university at the Student Club Championship of Astana (SCCA) and have since debated as a team in major tournaments, recently winning the 2018 Istanbul Meridyen Open Debating Championship.

In the ESL quarterfinal round, the team represented the opposition to the debate round motion, “This house believes that the European Union (EU) should decriminalise human smuggling,” facing teams from Leiden University, Ben Gurion University and the University of Oxford.

Notably, this year’s EUDC saw the greatest number of teams from Kazakhstan participating, with six teams from Astana and one team from Almaty joining the competition. A team from Kyrgyzstan also represented their country for the first time in EUDC, making this year’s delegation from Central Asia the largest to participate in a major international debate tournament.

“The difference from Kazakhstan’s participation in these tournaments in previous years and now is that we have significantly matured as a delegation. That is, we have many more acquaintances, many of whom are former trainers and have previously visited Astana. We have rapidly developed as a community, since many are now familiar with the Astana Debate Community and are very supportive,” said Shadeyeva.

“These recent developments have positively impacted the Kazakh teams participating in this year’s EUDC, since all teams were confident in their strengths and ability to break,” said Binazarov.

“Those teams from Kazakhstan which, unfortunately, did not break, still had an incredible experience nonetheless. Some of our debaters faced this year’s winning team in the open category in the preliminary debate rounds, which was a unique and valuable opportunity,” added Shadeyeva.

“Contrary to popular belief, preparation for a major debate tournament will not necessarily take up all of your free time,” explained Shadeyeva. “When I first came to university, I may not have known the functions of major international organisations, the geographic distribution of many countries and who is in conflict with whom and why. Of course, at that point, I had to allocate a lot of time and resources toward informing myself on these issues. Now, I can’t even distinguish between tournament preparation and my daily consumption of information. I simply read the news and took various undergraduate courses, all of which were of interest to me and proved invaluable in debate rounds. Enjoying the preparation process is very much a possibility,” said Shadeyeva.

“When you are consuming debate-related material as part of tournament preparation, you are not simply improving upon your debate skills, but you are also becoming more intelligent and informed overall. It brought me great enjoyment to listen to Vox Media’s podcast ‘The Weeds’ because I am genuinely interested in the United States’ politics, and the usefulness of the received knowledge is not limited to debates,” added Binazarov.

Kazakh teams were not only engaging in debate rounds at this year’s EUDC, but were also proactively seeking support for Astana’s bid to host the EUDC in 2020. The bid was ultimately successful, meaning that the first EUDC will be hosted in Central Asia in the near future.

The organisation of a competition of such large scale will prove demanding, but Kazakhstan’s convening team are prepared for the challenge. They have previously spearheaded the Nazarbayev University Debate Academy, the international debate tournament Astana Open, various international debating championships in the Russian and Kazakh languages and E.Quality Talks. Chief adjudicators will include experienced debaters Monica Forman and Raffy Marshall.

In the Astana Debate Community’s history, there were usually a limited number of Kazakh teams participating in major international debate tournaments. Many people were unable to commit their time, money and effort, especially following the devaluation of the tenge and given the sheer geographic distance of Kazakhstan from the host cities. The EUDC in Astana will make a competitive debate tournament far more accessible for aspiring debaters in and near Central Asia.

“Astana will become an identifiable point on the international debating community’s map, so it is a great opportunity for European university students, who will come to shape their own communities and society, to be exposed to our country. Likewise, our wider community in Kazakhstan may be exposed to the international debate community, which I was lucky enough to experience myself. These individuals are very diverse, friendly and open-minded despite having differing worldviews,” said Binazarov.

With such an exciting event nearing, some may be considering debating for the first time. Shadeyeva and Binazarov have words of encouragement for those interested in improving their existing communication skills.

“Firstly, debating involves structure and a clear and concise delivery of your ideas, so this is extremely helpful in not only communicating, but in attaining success in any given area, whether with friends, family or in your career,” said Shadeyeva. “You are able to more easily express your opinion in a way that allows you to work effectively and efficiently with others, avoiding misunderstanding.”

“Secondly, we gained critical thinking skills. Having debated, I began to consider different sides of various issues and to actually consider issues that I never thought problematic and whose importance I dismissed. I also came across people who are both interested in addressing these issues and who are, in fact, doing so,” added Binazarov.