ASTANA – Sport Without Limits, the intercontinental Astana-Paris bike marathon for visually-impaired and blind cyclists, came to a memorable end Sept. 10 in the French capital near the Kazakh Embassy, reported the Kazakh Foreign Ministry. 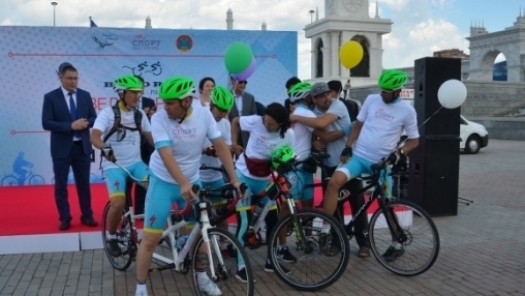 Launched more than a month ago at the Kazakh Eli monument, the unique project helped 17 individuals, including cyclists and volunteers, cross more than 5,000 kilometres and visit more than 30 cities in six countries – Kazakhstan, Russia, Belarus, Poland, Germany, and France. Riding under the slogan “The World of Unlimited Possibilities,” their objective was to show that Kazakhs with disabilities are able to achieve the most daunting goals, motivating all to engage in regular sports activities and lead a healthy life. Throughout their journey, the athletes felt tremendous support from all who met them along the way and even welcomed three additional cyclists in Germany, who joined the contingent on the way to the finish line.

The final part of the marathon started at the bust of Kazakh politician and publicist Mustafa Shokay in Nogent-sur-Marne. The route passed through many landmarks in the Paris region and the capital itself, including the Champs-Élysées and other tracks along the last leg of the Tour de France. The athletes were joined in support by Kazakh Ambassador to France Jean Galiev and members of the Diploma Cycles Association of Cyclists of the French Ministry of Europe and Foreign Affairs.

Near the Arc de Triomphe, the cyclists were welcomed by Jeanne d’Hauteserre, Mayor of Paris’ eighth arrondissement; Alain Néri, honorary Senator and former professional cyclist Alain Siclis and the head of a Paralympic foundation, as well as representatives of the Kazakh student youth population, diaspora, French friends of Kazakhstan, diplomats and their families.

“We are sincerely happy to see you at the finish of your long and difficult path, on which you overcame many difficulties, but also met a lot of kind and sympathetic people. Initiatives such as yours really work to bring peoples and cultures together and contribute to strengthening Kazakhstan’s positive image abroad. It is symbolic that the bike marathon united Astana and Paris in the year of celebration of the tenth anniversary of the strategic partnership between Kazakhstan and France. After all, your achievement is another contribution to the development of Kazakh-French sports and humanitarian cooperation,” noted Galiev.

In Paris, the athletes went on a motor ship tour to view the capital’s main attractions.

While passing through cities and countries, the cyclists met with associations supporting those with disabilities, sports organisation representatives and local authorities, as well as hundreds and thousands of ordinary people, showing that even if you do not see a clear picture of the world, you can still pursue your goal. The participants urge all those who learn of their initiative, both healthy and those with special needs, to follow one’s dreams, be a proactive member of society, dispel existing stereotypes related to individuals with disabilities and promote modern Kazakh culture and achievements.

The Kazakh diplomatic missions arranged athlete meetings in each country along the route.

Sport without Limits was introduced in 2016 with the support of the Anashim charity fund for children and youth. Established in 2001, the fund mainly deals with socialising persons with sight difficulties and has implemented many successful projects which have helped people with special needs achieve their goals. Two previous marathons for visually-impaired and blind cyclists, Almaty-Astana and Almaty-Issyk-Kul, were completed with the fund’s support.