By Dilshat Zhussupova in Tourism on 18 September 2018

ASTANA – An electronic atlas of Kazakhstan’s sacred places and monuments will be created as part of the three-year project “Investment Potential of the Sacred Geography of Kazakhstan: Geospatial Monitoring, IT technology and Historical & Cultural Analysis in the Production of an Electronic Atlas of the Republic” led by Nazarbayev University (NU) associate professor Nikolay Tsyrempilov. 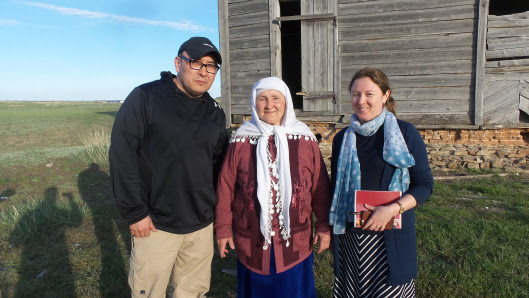 Researchers with the guardian of a mosque. Photo credit: historyatnu.wordpress.com.

NU professors from the history, philosophy, religious studies, anthropology and sociology departments make up the core of the team, in addition to involvement by the Kazakhstan National Geographic Society, Kazakhstan Gharysh Sapary and Kazakh National Museum. The stars aligned for the project’s realisation, since it is unprecedented for a university in Central Asia to host specialists in all three major world religions under one roof.

An electronic atlas is an instrument which allows users to geographically visualise historic and cultural phenomena.

“This kind of technology is widespread primarily in Western countries,” said Tsyrempilov in an interview with The Astana Times. “In Switzerland, there exists an entire institute dedicated to a digital atlas of the country. Opening their map, you may find out the population inflow rate of major Swiss cities. The interactive map shows you the figures in visual form. In this way, electronic atlases may show you data not only on contemporary issues, but also on historical ones.”

Kazakhstan currently lacks such a tool, but not for long. The research team applied for and received the Kazakh Ministry of Education and Science grant under the Mangilik Yel (Eternal Nation) programme. Having identified 12 geographic sites of sacred significance for Muslims,
Buddhists and Orthodox Christians, the team of historians, theologians and archaeologists set out on an expedition in May-July.

Every electronic atlas needs a starting point and the focus on sacred geography is particularly relevant for Kazakhstan.

“We need a spatial analysis of how religiously significant sites are distributed throughout the territory of Kazakhstan. The country is currently developing its domestic tourism, given that many prefer to go abroad and there is a consequent capital outflow to the United Arab Emirates, Turkey and Thailand and other nations. Our long-term priority, as researchers, is to render areas with religious and historical significance more tourist- and pilgrim-friendly. As suggested by the project name, we are trying to attract investors to develop the tourist infrastructure around such objects. Our purpose was to analyse aspects critical to investors. Are the sacred sites reachable by bus and train? Is there sufficient accommodation infrastructure?” said Tsyrempilov.

Beyond   contributing   to   domestic   tourism,   the   collected   data   will   serve   to emphasise Kazakhstan’s religious diversity.

“We hope that our research will provide a foreground of the cultural richness and high degree of tolerance historically maintained in Kazakhstan,” he noted. “It is important to convey the uniqueness of Kazakhstan as a region in which major religions encountered one another and peacefully coexisted.”

Above all, the researchers’ priority is to assess the historic and cultural potential of each site.

“I specialise in the history of Buddhism and originate from a Buddhist region in Russia. With this project, I took the opportunity to extrapolate my research agenda to eastern Kazakhstan, which is the site of many Buddhist temples and monasteries. For instance, the Ablai-kit monastery is one of the largest in Eurasia. Upon my visit, I was truly overwhelmed by the site, the landscape and the way it was installed within this incredible landscape. I firmly believe that the Ablai-kit monastery has great potential in attracting tourists as a historical object, a view which is shared by the Ust-Kamenogorsk Akimat (city administration)” he added.

“We also found old maps, which we compared with new maps in order to understand how the sites’ previous geography corresponds to recent ones,” said the professor. “For example, the Konyr Auliye cave in eastern Kazakhstan had religious significance for Buddhist Dzhungars and Kazakhs, prior to the rise of Islam. Now undergoing the process of Islamisation, the site is an interesting example of how a place can hold religious significance for different groups. That is why digitising old maps was an important part of our project.”

Information technology (IT) specialists are presently building a platform for the electronic atlas, which will progressively integrate the collected data.

“Regarding the data collected from the Muslim sites, we are going to visualise the distribution of the most important Sufi shrines and really see how the Isabek-ishan mazar complex, which is the focus of our project, is situated in the context of the wider Muslim Sufi geography of Kazakhstan,” said Tsyrempilov.

“There are many other aspects that may be revealed uniquely through visualisation. These aspects will remain hidden if we do not also observe a given site’s geography, landscape and connections with similar objects and the general infrastructure of trade routes and pastures,” he added.

Once the electronic atlas begins operating in 2020, the project team will invite people not only to view it but also contribute their knowledge of Kazakhstan’s religiously significant sites to make the resource as complete as possible.

While they are pioneers in the technological aspect of their project, Tsyrempilov emphasised the research team is following the trail already well established by Kazakh historians, theologians and archaeologists.

“We seek to incorporate NU into the already-existing and excellent academic community in Kazakhstan,” he said. “One of the problems of our university is that many professors’ research interests and work remain outside of Kazakhstan. This project is an opportunity to bind their research interests to the country. I, myself, primarily dealt with Tibet and Mongolia. Now, undertaking research on Kazakhstan, I am even more enthusiastic. The same concerns my colleagues who mostly dealt with Tatars of Russia or Orthodox Christians elsewhere and now study Tatar diasporas or Christian churches in Kazakhstan.”

NU will host a research conference on religious tolerance in Kazakhstan and the erstwhile Russian Empire on Oct. 5-7. The announcement will be posted on www.historyatnu.wordpress.com. Another conference, centred on research based on geographic information systems (GIS), which is expected to attract national and international digital humanities specialists, such as the team behind the Oriental Institute at the University of Chicago’s CAMEL Lab, is slated for 2020.