By George Baumgarten, United Nations Correspondent in International on 8 September 2018

NEW YORK – The ATOM Project Honorary Ambassador Karipbek Kuyukov addressed a special Sept. 6 session of the UN General Assembly devoted to the International Day against Nuclear Tests, delivering a powerful plea to the world and the eight specific countries to act to legally ban such testing. 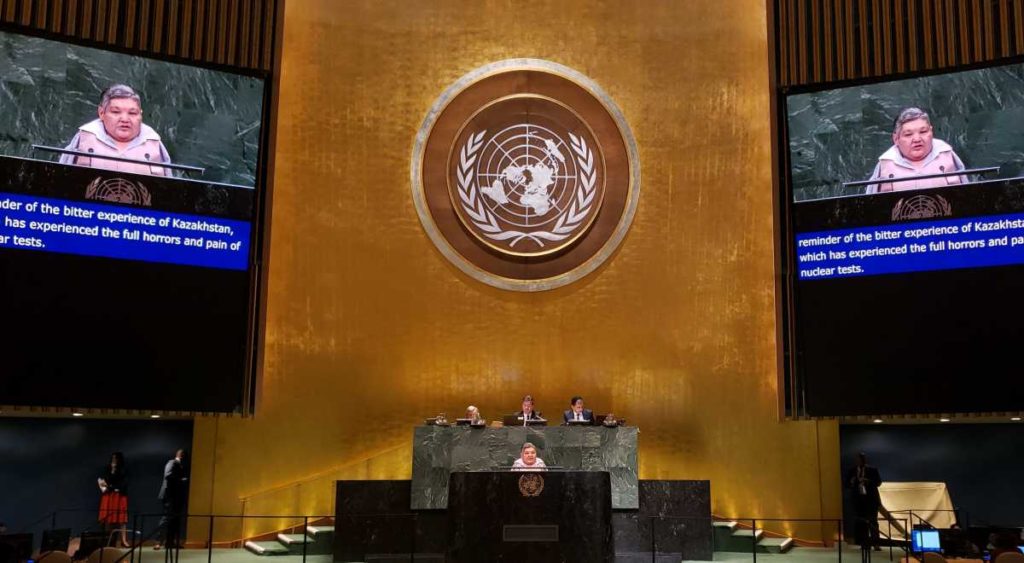 “Today is a very important day in my life, and I am grateful to everyone who gave me the opportunity to speak before you today. My voice sounds on behalf of all the survivors and dead victims of nuclear weapons. All that you will hear today will be another reminder of the bitter experience of Kazakhstan, which has experienced all the horrors and pain of nuclear tests,” Kuyukov told the session.

Kuyukov is among more than 1.5 million Kazakhs impacted by more than 450 nuclear weapons tests conducted by the Soviet Union at the Semipalatinsk nuclear test site in what is now the territory of Kazakhstan.

The site was shut down Aug. 29, 1991 at the direction of Kazakh President Nursultan Nazarbayev. In 2009, the United Nations established, at Kazakhstan’s initiative, Aug. 29 as the annual International Day against Nuclear Tests. 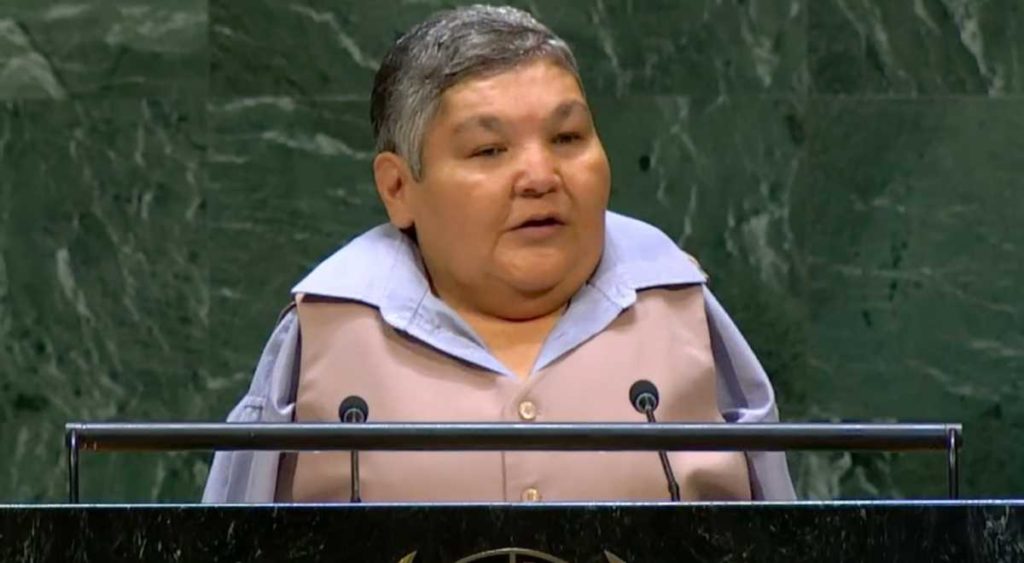 Kuyukov was born 100 km from the nuclear test site. He was born without arms as a result of his parents’ exposure to weapons testing. He has overcome that challenge, however, to become a renowned artist and internationally recognised nuclear disarmament activist. He has devoted his art to capturing the images of nuclear weapons testing victims and his life’s work to ending the nuclear weapons threat.

“A thousand families, ethnic Kazakhs living on the land allocated for the test site, have become hostages of radiation exposure. For the first atomic test, military builders were preparing the so-called experimental field. A nuclear charge was installed in the epicentre of the field. The following equipment was installed not far from the epicentre: military equipment, tanks, aircraft and armoured cars. In many shelters erected, experimental animals – sheep, pigs, dogs, and of course people who lived and worked near the nuclear test site for 40 years, were placed there while nuclear explosions were conducted on it. All this was prepared in order to determine the power of the destructive force of the nuclear explosion. My family still remembers how our house was shaken when a radiation wave from the regular explosion passed under us,” Kuyukov told the gathering. 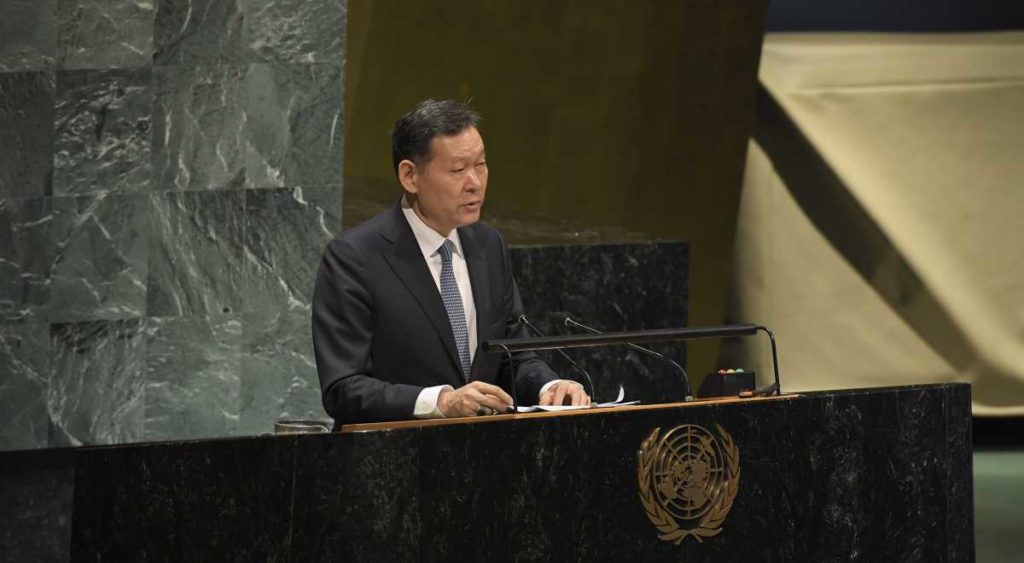 Kuyukov is The ATOM Project Honorary Ambassador. ATOM is an acronym for “Abolish Testing. Our Mission.” The project is an international effort launched in 2012 to permanently end nuclear weapons testing and seek elimination of all nuclear weapons.

“The efforts of President Nursultan Nazarbayev in this sphere find understanding and support from the world community. By his decree on closing the Semipalatinsk nuclear test site, he showed everyone that Kazakhstan has chosen the path of peace and goodness, and that this is a worthy example for other countries,” he said. “Only by joint efforts are we able to achieve a complete ban on nuclear testing … We must take the most bitter lessons in the history of the consequences of nuclear testing and strive for the total elimination of nuclear weapons.”

Guterres spoke in the aftermath of his recent visit to Nagasaki, and his conversations with atom bomb survivors there, known for their Japanese term of Hibakusha. He reminded the Assembly “of the need to ensure that nuclear weapons are never used again.”

Gutteres cited the plight of those directly and personally affected: “We also remember the victims of the disastrous era of widespread nuclear testing.”

He described the communities – in Kazakhstan, South Australia, and Polynesia – as “the world’s most vulnerable communities in some of the most fragile areas of the planet from the environmental point of view.”

Guterres spoke of the Comprehensive Nuclear Test-Ban Treaty (CTBT), but noted that 20 years after its negotiation, the treaty has yet to enter into force.

“The failure to do so,” he said, “prevents its full implementation and undermines its permanence in the international security architecture.” Saying he was convinced that this was an achievable goal, the Secretary-General added: “I urge all not to wait for others to act before moving forward.”

In his remarks, Kuyukov described, however, how he chose not to let his victimhood define his life. Painting with brushes held in his teeth or toes, he portrays the land changed by the nuclear explosions: the stark landscape of the desert, the haunting colours of the steppe. This led to President Nazarbayev’s anti-nuclear weapons policy, characterised by Kuyukov as “the path of peace and goodness”.

In that spirit, Kuyukov called on eight countries, on whose actions depends the entry into force of the CTBT, to sign and/or ratify the treaty in the name of peace and changing the world for the better. The eight countries, listed in the Annex II to the CTBT are China, Egypt, India, Iran, Israel, the Democratic People’s Republic of Korea, Pakistan, and the United States.

It was a plea from within a victim’s body, albeit delivered from an artist’s heart.