By Dilshat Zhussupova in Tourism on 25 September 2018

ASTANA – Astana will host the eighth World Tourism Organisation (UNWTO) Global Summit on Urban Tourism in 2019 following a decision taken at the recently concluded similar summit in the capital of South Korea. 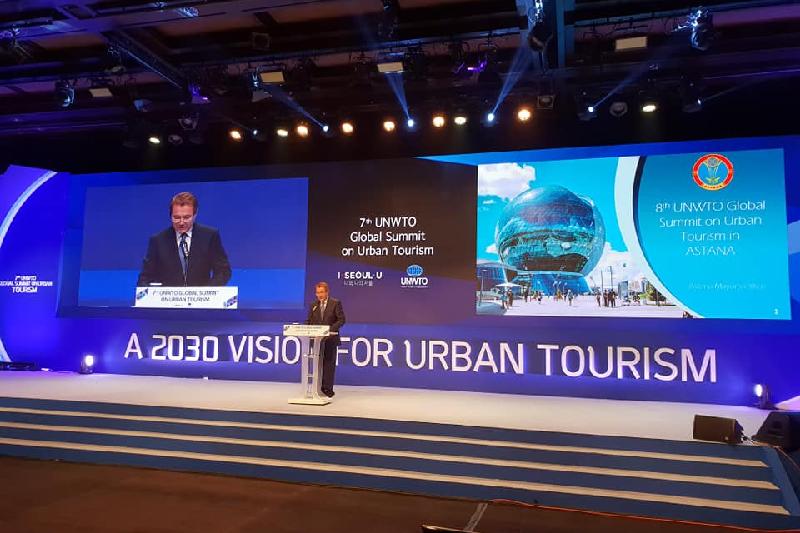 Astana’s summit will attract leading tourism experts, gather government and private partners from all sectors to discuss a new form of urban tourism development, in which tourism will function as a tool for social cohesion, preservation of culture and economic development.

The global summit is hosted annually in a city selected according to UNWTO requirements. In deciding upon Astana as the summit destination, the city’s development prospects for urban tourism, previous projects and event experience, sustainable development, economy, social sphere, ecology and administrative systems were considered.

“Earlier, the summit was held in large cities in which the level of tourism development exceeded global indicators, such as Istanbul, Moscow, Barcelona, Marrakech, Luxor, Kuala Lumpur and Seoul. Holding an event of this scale and level is the first in the history of independent Kazakhstan in the field of tourism,” stated the Astana Akimat (city administration).

The event is an opportunity to make Astana widely known as a new centre of tourism in Central Asia, to demonstrate new directions for city development, showcase its meetings, incentives, conferences and exhibitions (MICE) potential and strengthen cooperation with major international organisations. Hotel occupancy, souvenir demand and the number of cafe and restaurant visitors are thus expected to increase.

Tourism industry development is a key priority of the Kazakhstan 2050 Strategy, which involves positioning the country among the top 30 global economies by 2050. Moreover, Kazakhstan’s Tourism Industry Development Plan 2020 aims to establish five tourism clusters, invest $4 billion and create 300,000 new jobs in the industry by 2020.

The UNWTO is a United Nations (UN) agency which promotes responsible, sustainable and universally accessible tourism. It generates market knowledge, promotes competitive and sustainable tourism policies and instruments, advances tourism education and training and fosters tourism as an effective tool for development. A leading international organisation in tourism, its membership includes 158 countries, six territories and more than 500 affiliate members.