By Malika Orazgaliyeva in International on 29 August 2018 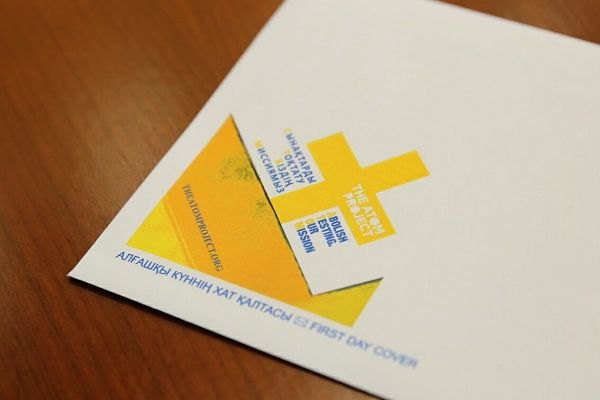 “Today is a very significant day both for The ATOM Project and for the global anti-nuclear movement. The launch of the stamp and its further use will be a reminder for people of the bitter experience of Kazakhstan, which has suffered from the horrors and pain of nuclear tests,” said The ATOM Project Honourary Ambassador Karipbek Kuyukov during a ceremony hosted by the Kazakh Ministry of Foreign Affairs commemorating the issuance of the stamp.

President Nazarbayev announced the launching of The ATOM Project Aug. 29, 2012 at the international conference, From a Nuclear Test Ban to a Nuclear Weapon-Free World in Astana.

The initiative seeks to galvanise public support for bringing the Comprehensive Nuclear Test Ban Treaty into force and for the elimination of all nuclear arsenals. The project includes an online petition, which has now been signed by more than 300,000 people around the world seeking a permanent end to nuclear weapons tests.

“Our goal today is to reach one million signatures. If you have not yet joined us, feel free to do it any time. Everyone may sign the petition on the project website www.theatomproject.org and thereby contribute to building a nuclear-weapon-free world,” said Kuyukov.

The ATOM Project postage stamp from the series For the Sake of Life on Earth uses four colors and 20,000 copies will be put into circulation, Managing Director for Administrative Affairs of Kazpost Bauyrzhan Ainabekov also attended the event.

Following the ceremony, the film “Where the Wind Blew” by British documentary film-maker Andre Singer premiered at The Gumilyov Eurasian National University. The film chronicles the devastating consequences of nuclear tests conducted at the Semipalatinsk Nuclear Test Site for more than 40 years.

Kazakhstan will also host Aug. 29-Sept. 1 a conference of the Comprehensive Nuclear-Test-Ban Treaty Organisation (CTBTO). The conference begins on the International Day against Nuclear Tests.