By Malika Orazgaliyeva in Nation on 28 August 2018

ASTANA ­­– Kazakh Minister of Education and Science Yerlan Sagadiyev participated Aug. 18 in Human Resources in the Framework of the Fourth Industrial Revolution, an annual pedagogical workers’ conference.  He reported on the Ministry’s activities to advance the country’s education system. 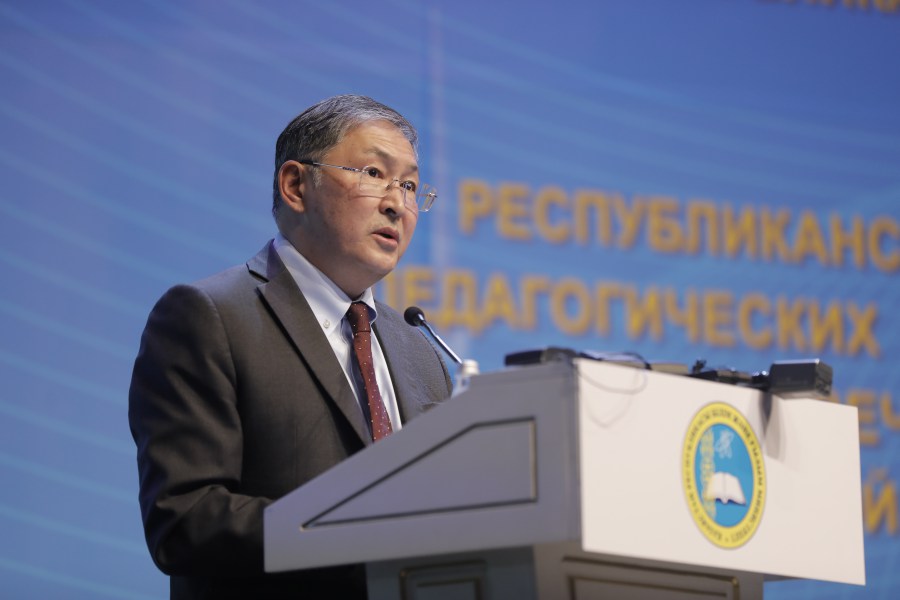 Sagadiyev noted that thanks to the attention of President Nursultan Nazarbayev and the government, some of the most important issues were solved in the last year. Specifically, the situation with teachers’ pay was improved and the responsibility of educational institutions increased.

The minister opened with pre-school education. The most important aspects include full coverage by pre-school learning and introducing a single programme, as well as organising teacher trainings, he said.

The current level of public and private partnerships in Kazakhstan corresponds to the global indicator. The proportion of private kindergartens exceeds 30 percent and 93 percent of children between ages three-six are provided with kindergarten.

The next important work in this area is converting the kindergarten queue into electronic format, which will help move the line quicker and open it to the public.

“The most significant attention was paid to secondary education. In accordance with the schedule, we are moving on to an updated content. From the beginning of the new academic year, programmes of the third, sixth and eighth grades will be updated. There is also an approbation process beginning in the fourth, ninth and tenth grades. We are moving gradually. Teachers are ready. Textbooks are ready. Especially, a lot of work has been done to improve the quality of textbooks, which were also introduced in electronic format,” said Sagadiyev.

Within the Ruhani Zhangyru (Modernisation of Kazakhstan’s Identity) programme, a course of regional studies will be introduced for fifth, sixth and seventh grade students. The ministry has created the necessary textbooks in collaboration with regional authors.

Computer science will be taught as part of the Digital Kazakhstan programme starting in third grade. The course will be introduced in first and second grade next year.

Digitisation is of particular attention with IT technologies and robotics. Local executive bodies are working to expand the robotics, programming and 3D printing classes currently available in approximately 1,500 schools. Plans are also underway to open IT lyceums in all regions.

Concerning unified national testing (UNT), the difference between Kazakh and Russian schools was eliminated in the previous academic year. A difference remains, however, in the quality of education between rural and urban areas, said Sagadiyev.

He noted the next key issue is teachers. The overwhelming majority are attracted to other jobs due to wide gaps in the system. To solve the problem, the ministry is revising and updating the teachers’ functions.

Starting in September, teachers will be no longer participate in UNT and should only be engaged in providing quality education. UNT school ratings have also been removed.

Teachers will receive an additional 30 percent-50 percent bonus of their salary in accordance with their categories, which will be determined by the results of the attestation, said Sagadiyev. Approximately 60,000 teachers applied for certification in May, of which more than 36,000 passed.

At the same time, more than 110,000 teachers will be trained at national budget expense. More than 8,000 teachers are studying language courses to teach their subjects in English, nearly 5,000 of whom will start teaching in English in September. The rules have also become stricter to raise the professional level of principals.

Migration is another sensitive question regarding the country’s education system. According to 2017 results, more than 320,000 people have participated in interregional migration. Last year, approximately 80,000 individuals, including nearly 17,000 children, moved to the capital from other regions. The large number of children will result in the need to open almost 15 new schools annually.

The Ministry is also introducing modern educational programmes and raising the requirements for students in higher and postgraduate education. The law on academic freedom provides an opportunity for institutions to update their programmes.

President Nazarbayev increased the number of educational grants from last year’s 10,000 to 20,000, noted Sagadiyev. Therefore, universities’ responsibilities for the quality of education has become the number one task.

In order to solve the problem, the Ministry will revoke licenses from universities with a low level of student employment. Seventeen licenses have already been withdrawn. The action will lead to specialising higher education institutions on main areas of study.

“We can proudly say that a league of universities is being created in Kazakhstan that will systematically put high demands on students, academic honesty and the university’s name over the current market situation,” he said.

“These are not all the measures that we will undertake. There are KPIs (key performance indicators) for rectors of the state universities, compulsory anti-plagiarism, gradual introduction of certification for graduates of regulated professions and so on. All the measures undertaken by the ministry are either coming from the universities themselves, or widely discussed with them,” he added.

The ministry has reduced negative trends such as annually reducing technical and vocational education students by increasing the proportion of students studying under the state order to 54 percent.

The ministry is also focused on protecting children’s rights and significant work is being done in the area, according to Sagadiyev.

Integrating science and business is also one of the main trends, as business has actively begun to co-finance science. Last year, the share of business expenses in research and development (R&D) was 32.3 percent, a 2-percent increase compared to 2016.

The country is also developing a process to integrate Kazakh science into the international scientific community. Nearly 500 local projects are being carried out with the participation of foreign scientists, he noted.