By Anuar Abrakhmanov in Sports on 6 August 2018

ASTANA – FC Astana beat Danish FC Midtjylland on aggregate to advance from the second to the third qualification round of the UEFA Champions League. 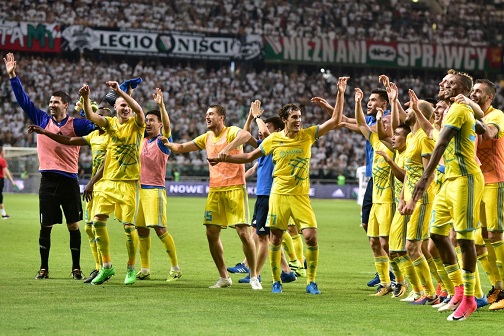 FC Midtjylland is a strong team. The club was a sensation after beating England’s Manchester United in the UEFA Europa League group stage.

Fans also wanted to know what FC Astana would look like after several new footballers signed contracts with the team during the summer transfer break.

The club had serious difficulties in the first match, despite having advantages in the game. The team won 2-1 on July 21, but the winning goal was scored in the fourth minute of extra time.

FC Astana demonstrated a pragmatic game by playing in defence in the return match on Aug.1. The key moments of the return match included a controversial play in the first half involving forward Junior Kabananga. The ball he kicked in the 19th minute appeared to cross the goal line, but the chief arbiter, Spain’s Juan Martinez, did not score the goal. Serikzhan Muzhikov then had an opportunity to score in the second half when he hit the ball in the perfect position, but the FC Midtjylland goalkeeper saved his team from a goal.

“It was a tense match. Over the match we had chances to score several goals that we could not perform and we understood that playing standard and making attacks, a goal could be scored in our net. It is very important to stay calm and control the game in order to understand how to change the situation. That was exactly what we did,” said FC Astana head trainer Roman Grigorchuk.

The team’s next opponent will be Dinamo Zagreb. The opening match will be played in the Kazakh capital Aug. 7, with the return match Aug. 15 in Croatia.