By Elya Altynsarina in Central Asia on 28 August 2018

ASTANA – Kazakh President Nursultan Nazarbayev urged an Aug. 24 summit of the heads of the founding states of the International Fund for Saving the Aral Sea (IFAS) in Turkmenbashi city, Turkmenistan to reorganise the IFAS to better protect the environmentally-damaged water body. 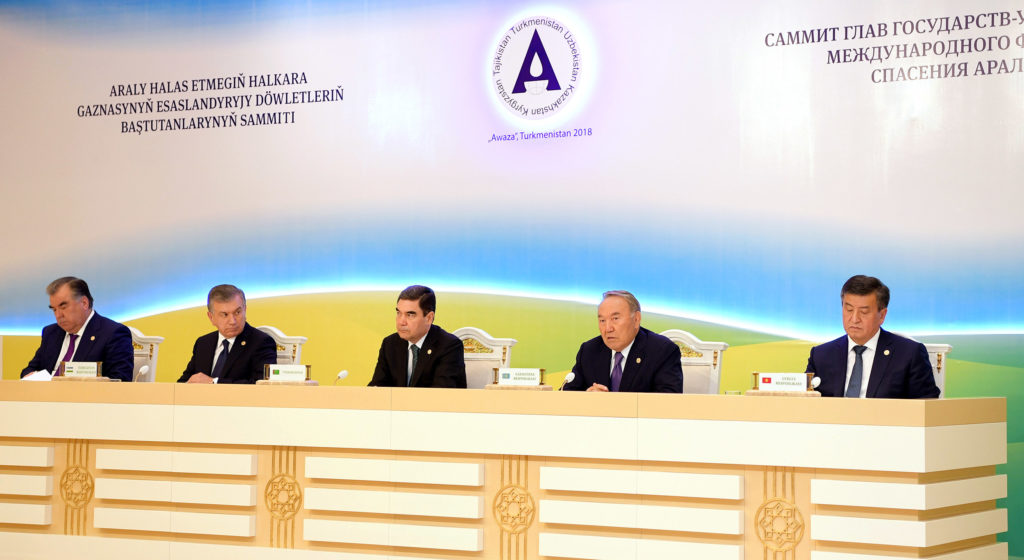 “It is time to automate the management, distribution, the accounting and monitoring of water resources and its quality; it is as relevant as ever to establish the International Water and Energy Consortium of Central Asia (…), and consider the permanent deployment of the Executive Committee of IFAS in one of our countries,” stressed Nazarbayev.

He said the summit, the first since 2009, is a landmark event of an international scale and will increase regional water resource cooperation.

“We defined new priorities and tasks here. The solution of these issues is of fundamental importance for ensuring the sustainable development and prosperity of Central Asia. Therefore, all this requires from us coordinated joint actions. For my part, I want to assure you that Kazakhstan has been and remains a consistent and reliable partner in the issues of regional cooperation,” said Nazarbayev.

Nazarbayev added that in the Kazakh part of the Aral Sea the climate is getting better; several fishing enterprises have opened improving the social, economic conditions in the area.

The summit participants, including the five presidents of Kazakhstan, Kyrgyzstan, Tajikistan, Turkmenistan and Uzbekistan, agreed to examine the role of the organisation’s executive bodies and, in a press conference after the summit, said it is necessary to bring the issue to the global community, continue raising awareness at the UN, funds and financial institutions involved in supporting the IFAS.

It was also specified that water consumption needs to be reduced by 50-60 percent by applying drip irrigation, and it was recommended that salt-resistant crops be planted to improve environmental conditions and to develop new types of feed for livestock.

The meeting initiatives and agreements were stipulated in the summit communiqué that will serve as the basis for an action plan to be drafted by the Turkmen side.

The Aral Sea used to be the fourth largest saline lake in the world until the third quarter of the 20th century when the Soviet Union diverted water from the two main rivers flowing into the lake – Amu Darya and Syr Darya – to irrigate agricultural lands to produce mostly cotton.

The diversion reduced the lake’s size thirtyfold, significantly damaging the region’s ecosystem, flora and fauna. The damage is considered one of the world’s largest environmental disasters.

As dramatic changes continued, the original level of water salinity of 10 grams per litre rose to approximately 100 grams/litre in the remaining part of the lake, thus harming the public health and atmosphere: today the deserted basin releases up to 80 million tons of poisonous salt into the atmosphere – one can find its particles carried by dust storms in the territory of Western Europe and the peaks of Himalayas.

The IFAS was established with the support of Central Asian states and has a mission to “coordinate cooperation at national and international levels in order to use existing water resources more effectively and to improve the environmental and socio-economic situation in the Aral Sea Basin,” according to the organisation’s website.

“Thanks to IFAS’s active engagement with international partners, the region today receives substantial assistance from the global community and international financial institutions,” said Nazarbayev. “Our joint efforts contributed to the fund’s observer status in the UN General Assembly.”

According to Nazarbayev, the trans-boundary water resources in Central Asia are the common heritage and property of the peoples of the region, and all countries are seeking common solutions.

Currently, at the initiative of Turkmenistan, a programme for the countries of the Aral Sea under the auspices of the United Nations (UN) is being considered. Earlier, following the initiative of Tajikistan, the UN General Assembly declared 2018-2028 the International Decade for Action “Water for Sustainable Development”; the Government of Uzbekistan hosted the Central Asian International Environmental Forum in Tashkent in June, while Kyrgyzstan jointly with UN agencies developed the Strategic Action Programme for the Chu and Talas River Basins.

Commending these actions, the President of Kazakhstan invited participants to the Oct. 10-12 Eighth Session of the Meeting of the Parties to the Convention on the Protection and Use of Transboundary Watercourses and International Lakes in Astana.

Other than these initiatives, until now, the Syr Darya Control and Northern Aral Sea (NAS) Project helped to improve ecological and environmental conditions in the delta area: the water level has remained at 42 metres since 2010; water salinity continues decreasing and flora and fauna are being restored.

On the summit sidelines, Nazarbayev met with Turkmen President Gurbanguly Berdimuhamedov to discuss cooperation following the recent signing of the Caspian Sea Legal Status Convention, which opens up the possibility, according to the two leaders, for a joint roadmap in the field of transportation, transit and regional security.