By Dilshat Zhussupova in Astana on 16 August 2018

ASTANA – Visitors young and old may now enjoy the comfortable and quirky surroundings of the newly-opened Park Chemodanov (Park of Suitcases) and Skver Ilyuzii (Square of Illusions) in the Saryarka district, reported Inform.kz. Construction began in May and the recreation zones opened in time for the capital’s 20th anniversary celebrations. 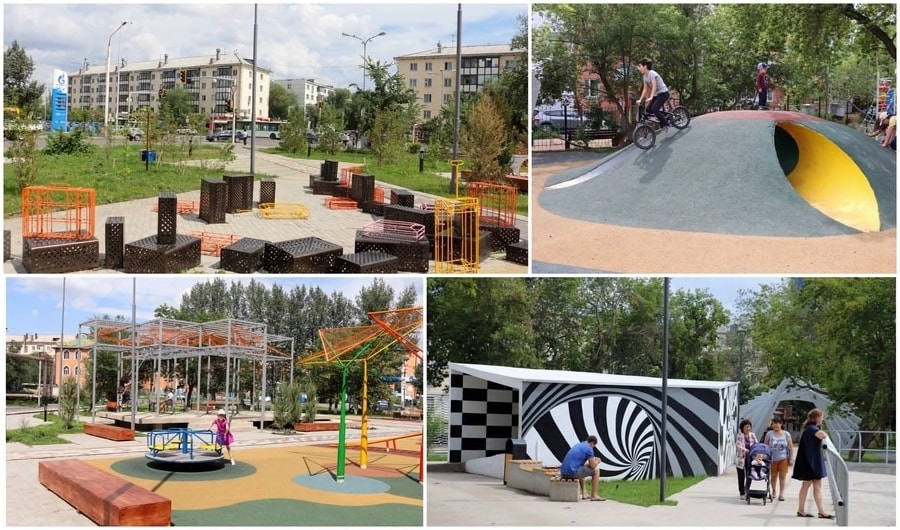 “Given the way in which the architectural space is structured, each square has its own unique style,” said Yerassyl Sembayev, specialist at the city’s Environmental Protection and Nature Management Department.

Located near 5 Birzhan Sal Street, Park Chemodanov is aptly named given its proximity to the railway station. Children may imagine themselves as travellers when playing among the iron suitcases, rails and even wheeled tennis tables scattered throughout its 2,293 square metres.

Skver Ilyuzii, measuring 2,765 square metres, is located at the intersection of Respublika Avenue and Dukenuly Street. Skaters and bikers may traverse a skatepark with steep climbs. Curious passersby stumped by the Ames room’s optical illusions and youngsters amuse themselves on the playground’s slides and swings.

The cost of both projects was 130 million tenge (US$357,890), said Azamat Zhanatayev, director of section for perspective planning of managing environmental projects of the city’s Department for Environmental Protection and Nature Management Department .

The two sites were previously occupied by deteriorating barrack-type houses, with limited space to walk and rest. Now, pedestrians may take a break on the benches and find shade under the trees, which were preserved during and after construction.

Residents may also look forward to visiting Skver Kamnei (Square of Stones) in September. Located on Saryarka Avenue near house 27, its three recreational areas include stone installations, one playground with various sports equipment and a second with space for a coffee shop or fast food eatery. The 2,304-square metre park was created at a cost of approximately 55 million tenge (US$151,415).