By Dilshat Zhussupova in International on 24 July 2018

ASTANA – Thousands of people attended the July 21 funeral services in Almaty of late Kazakh figure skating medallist Denis Ten. The services were held two days after he was fatally stabbed in Almaty at age 25. 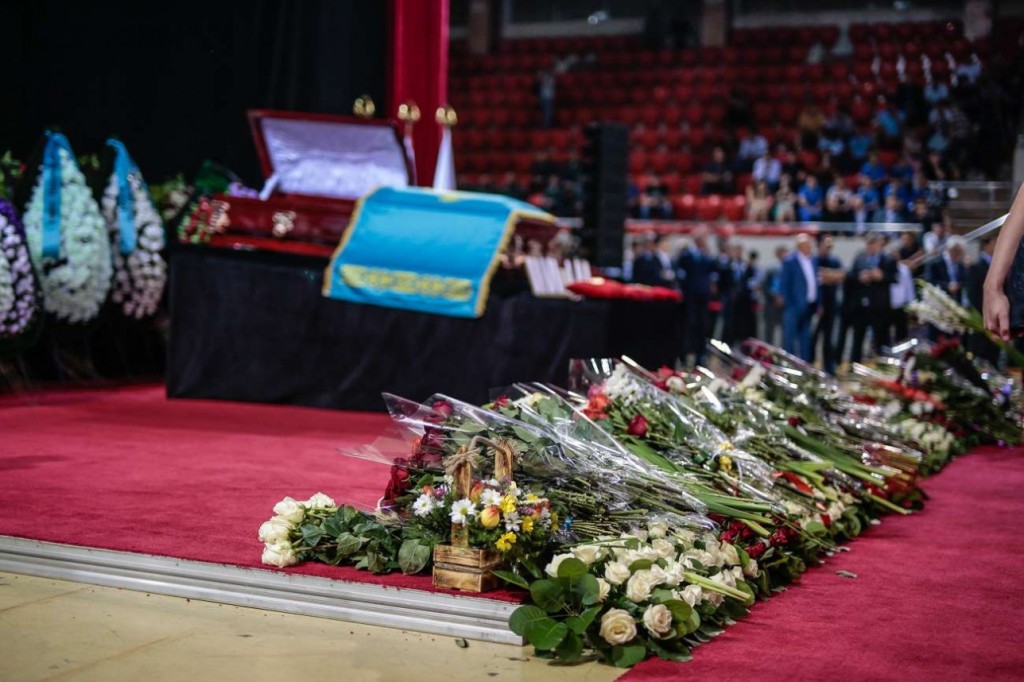 Ten died from the stab wounds in a hospital following a confrontation with car thieves in downtown Almaty July 19. Two men have been arrested in connection with the stabbing and one suspect has confessed to the crime.

The ceremony took place at Almaty’s Baluan Sholak Sports Palace, which was where the 17-year-old Ten won 2011 Asian Winter Games gold and silver medals. The 5,000-seat sports complex was at full capacity during the funeral services, and thousands more waited outside the facility to pay their respects at Ten’s open casket.

“Kazakhstan and the entire world are mourning today,” said Muhamediuly. “We have lost a person who wanted to make the world a kinder and better place.”

Almaty residents held back tears during the moment of silence and when placing flowers at the foot of his casket and the table displaying his medals. They held banners reading “Forgive us, we couldn’t save you” and listened to “She Won’t Be Mine,” an original song written and recorded by Ten. 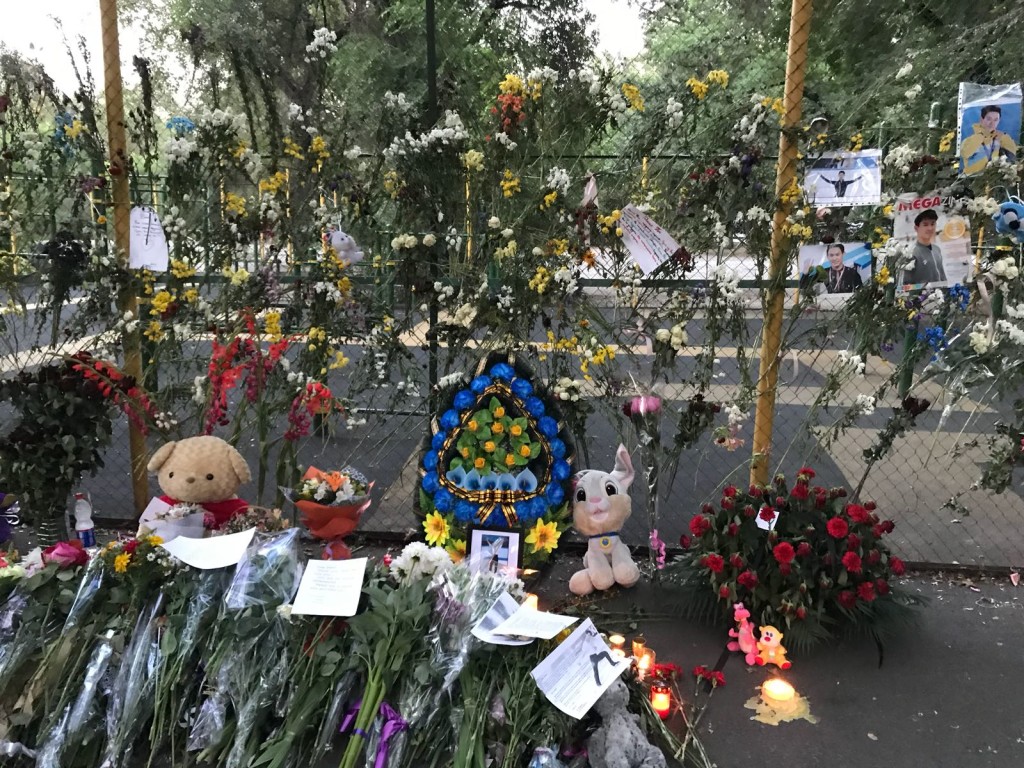 Kazakh middleweight boxing medallist Gennady Golovkin flew in from Los Angeles, halting his training for his upcoming rematch with Saul Alvarez, to attend Almaty’s ceremony. He comforted Ten’s bereft parents throughout the service.

Ten was buried in a cemetery in Almaty’s Druzhba village after the ceremony’s conclusion.

All over the country and the world, people gathered at memorial services to pay tribute to Ten. 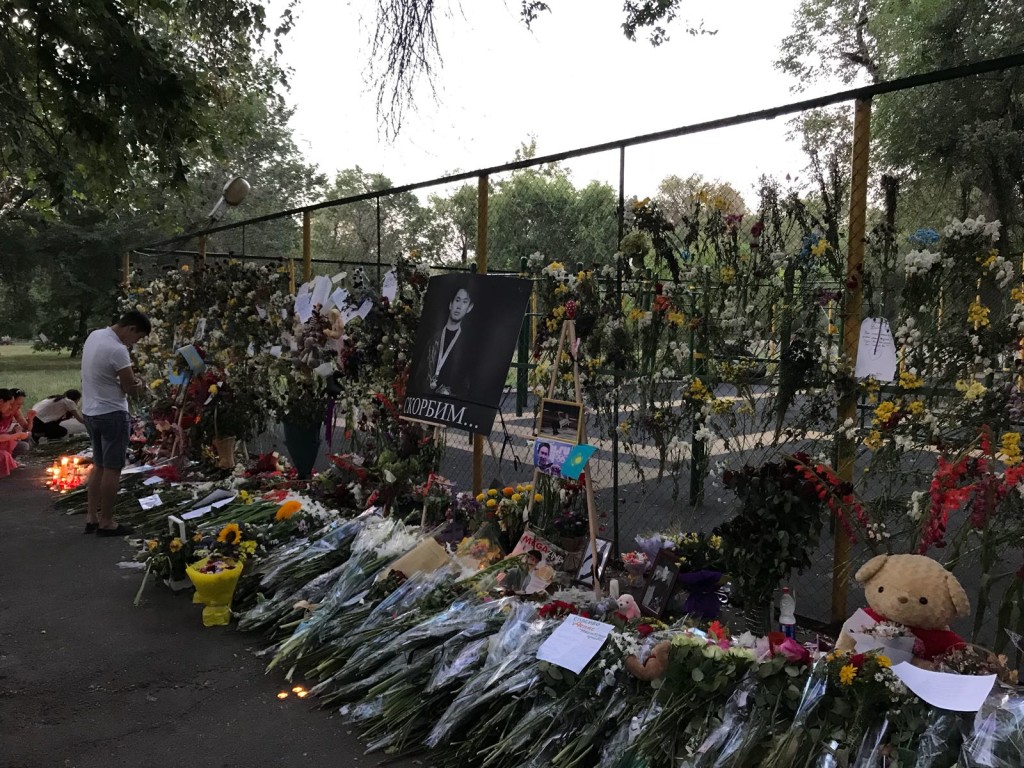 “Denis Ten is a descendant of General Min Geung-ho, the country’s outstanding fighter against Japanese colonialists. We will always remember the hero of his country, a close friend of the Republic of Korea, Denis Ten,” said Dae-sik in a telegramme.

Kazakh embassies in the Czech Republic, Russia, Latvia, Japan and Korea welcomed the public to lay flowers at Ten’s portrait in front of their buildings. People weathered extreme heat to fill out eight books of condolences with their heartfelt messages at the Kazakh embassy in Tokyo.

“The doors of our embassies and consulates are always open to all,” said the Kazakh Ministry of Foreign Affairs press secretary Aibek Smadiyarov in a July 20 statement. “Yesterday, people gathered near our consulate in Riga. Today, a book of condolences has been opened at the embassy in Moscow.”

Projects in commemoration of Ten are under way. A film script, which he had been working on in recent months, is planned for production.

“We are going to try to realise his idea and shoot a film dedicated to this multi-talented person,” said Kazakh-Russian film director Timur Bekmambetov. “In his 25 years, Ten managed to do so much and had such grand plans, which he would have surely put into practice because he was a real hard worker.”

Medeu Mountain Skating Rink management seeks to install a memorial of Ten in Almaty, hoping to finance the project through a crowd-funding platform.

“At the moment, we are negotiating with City Hall. As soon as the initiative is approved, we will decide on its exact location,” said the skating rink’s Marketing Director Aigerim Niyazbekova.

Born in Almaty to a family of Korean descent, Ten graduated from the Kazakh Academy of Sports and Tourism with a diploma with honours and had been pursuing an MBA programme in Oil and Gas at the Kazakh-British Technical University.