By Dilshat Zhussupova in Business on 26 July 2018 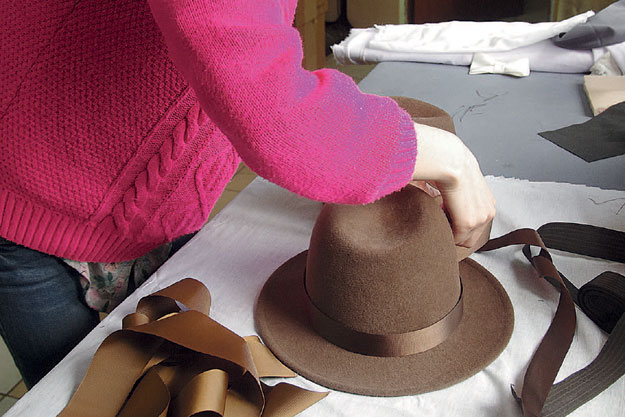 Director and founder Bakyt Alimbekova is seeking to prepare the brand for export by participating in Kazakh fashion designer Ayazhan Zhaksybai’s business incubator for national brands.

The first in the country and financed by the European Bank for Reconstruction and Development, the incubator aims to equip and propel rising fashion businesses to compete locally and globally. Zhaksybai, a certified international marketing consultant and director of fashion brand Aika Alemi, works closely with participants in applying to and presenting at foreign showrooms and major fashion week presentations.

“This is an excellent opportunity to improve our marketing, branding, technology, finances and strategy for entering international markets,” said Alimbekova. “We plan to present our headwear collection internationally at next year’s White Milano exhibition.”

The company’s production process starts with design development and construction and ends with tailoring and sales. The progression occurs in facilities with 30 manufacturing staff and an annual capacity of 300 million tenge (US$866,651).

Raw materials, with the exception of sheepskin, are purchased overseas biannually as they cannot be obtained in the Kazakh market. Velvet hats are usually bought in the Czech Republic, felt caps in Russia and karakul hats in Uzbekistan.

“We do our best to make our products accessible,” said Alimbekova. “That is why retail sales are doing well – an average of 170 hat models are realised per year. We receive individual orders from Kazakhstan, Japan, Russia and Germany.”

Such business orientations require substantial investment and experienced sewing and manufacturing technology professionals, which are also lacking in the domestic market.

“There are no specialisations in Kazakh educational institutions for sewing headwear,” said Alimbekova. “Given that we want to focus on headwear production for retail, knowledge on international best practices can render our production process less time consuming and our products lighter and more modern.”

Creating headwear has been Alimbekova’s lifework. A graduate of Zhambyl Technological Institute of Light and Food Industry, she started her career as an inspector and later became chief engineer at Almaty’s headwear factory. In 1997, she opened a national headwear business with fashion designers Natalia Bogdanova, Lyudmila Roo, Nina Shilo and Lyubov Vedmedieva.

“At first, we had to reach out to potential clients ourselves. Over time, we began participating in tenders for producing hats for law enforcement bodies and, with growing confidence in our abilities, we pursued larger-scale tenders,” she said.

In 2002, the entrepreneurs’ efforts were rewarded when hat demand grew and they were able to purchase their own premises and more sewing equipment.

“We sewed exclusive, tailor-made hat collections for clients who sought us by recommendation,” she added.

Despite significant setbacks in 2006-2008 due to building demolition, Alimbekova’s business continued to experience long-term growth. Opening Astana and Almaty retail outlets in 2012 and 2015, respectively, was made possible by its continued participation in contracts with law enforcement bodies.

“Defence procurement facilitated the development of our business. Still, I seek to gradually step away from tenders and begin producing more hats for retail,” she said. “This transition is feasible within a five-year period, when freer working capital will allow us to increase production capacity with the purchase of more equipment, technology and raw materials.”

The business currently directs all resources towards development as part of its long-term modernisation strategy. Twenty million tenge (US$57,777) from Damu Entrepreneurship Fund’s Business Roadmap 2020 programme was allocated towards equipment in 2016 and another 20 million tenge (US$57,777) was invested in additional equipment two years later. The investments will be used to drive the company’s competitiveness and future production of a women’s clothing line.