By Aidana Yergaliyeva in Sports on 18 July 2018 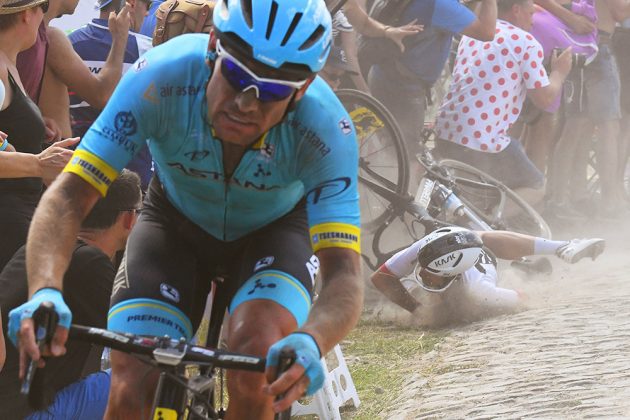 Although the team was not among the top in the stage, it rose to seventh place in the GC. Fulsang was 1 minute, 33 seconds behind yellow jersey leader Greg Van Avermaet (BMC Racing Team), reported astanaproteam.kz.

The 156.5-km route from Arras to Roubaix was among the most challenging for GC contenders, as it included 12 sections, or 21.7 km, of cobbles.

“[It was a] very difficult stage, but we passed it well. In the finale, I was in the first group with Jacob, defending him. I was ready to do whatever it took if anything had happened, but everything was fine. I put out 100 percent, but I know that my comrades did even more. We did not win so much today, but on the other hand, we did not lose anything. So, everything ended well,” said biker Tanel Kangert.

Stage nine offered fans incredible drama. The stage included crashes, with Astana Pro having a number of accidents, but teammates were there each time to provide support and assistance. After Fulsang fell in the final part, the team did everything possible to bring their leader back to the main group.

“[I have] slightly twofold feelings after this stage. On the one hand, I would like to achieve more, gain time from my rivals, but I did everything that was in my hands. I fought to the finish and at the finish I was left completely powerless. Well, this is how the race turned out to be. In any case, I think that I had a good stage. I’m still ahead, I climbed two positions in the overall standings and the situation looks good before the mountain stages. I don’t think it’s worth complaining, because I finished along with other top favourites. I had a small bicycle accident somewhere in the middle of the distance, but the team was next to me, so very quickly the guys brought me back to the group. In general, everything went well and now we have a well-deserved rest day,” said Fulsang.

After Monday’s rest, contenders will resume the 105th La Grande Boucle in the next three days in the mountains, including a stage featuring Alpe d’Huez.