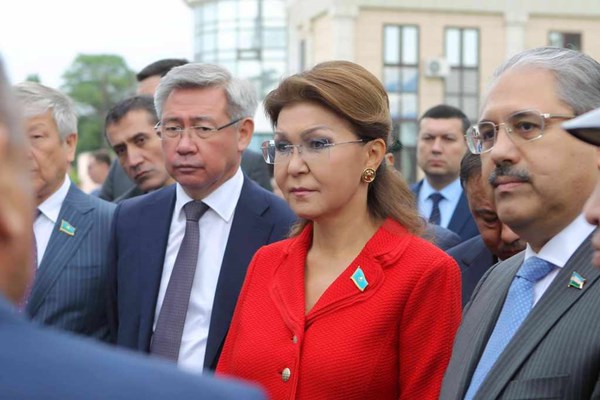 She stressed the importance of developing tourism to “know better and trust each other.”

“We discussed the need to facilitate the development of tourism not only in Kazakhstan and Uzbekistan, but also to foster the increase of the inflow of tourists coming from abroad.  When they come to the Central Asian region, they want to see all major sights at once. For that we need to introduce a single visa regime,” said Nazarbayeva.

Once a remote region located on what was known as the Silk Way that spun for centuries connecting Europe and the Far East, Central Asia is drawing increasing interest internationally as a mysterious and little known destination and a melting pot of cultures and people.

Central Asia is a far-flung region, she added, and visa application procedures are tedious for many tourists willing to visit the countries in the region.

“It could probably be an Asian ‘Schengen’ that could be called Silk Visa,” said Nazarbayeva referring to the Schengen visa covering most of the European Union member states as well as Switzerland and Norway.

The countries have been taking measures to simplify visa procedures.

In 2014, Kazakhstan introduced a visa-free entry to citizens of ten countries allowing a visa-free stay for up to 15 days.

The pilot project was a success and the government extended the list to 19 countries in 2015.

In 2017, in connection with the creation of the Astana International Financial Centre, that list was expanded to cover all citizens of 45 countries, including the European Union and Organisation for Economic Cooperation and Development member states, and the visa-free stay for them was extended to 30 days.

In Kyrgyzstan, passport holders of 61 countries also enjoy a visa-free stay for up to 60 days. Last year, the Kyrgyz government introduced and eVisa system enabling tourists to apply for tourism, business and group visas online.

“We need to create a transparent, open and friendly border, then our relations in all areas will come to develop by themselves,” said Nazarbayeva.

“I do not think that many visited Samarkand, Khiva, Bukhara. I was myself in Samarkand and Tashkent and I have never been to other cities,” she added.

Discovering the region and getting to know its culture and people within one tour would be a great opportunity, he said then.

“We think of a Kazakh-Uzbek travel route as a good idea. Tourists visiting the Uzbek part of the route could visit Samarkand, Bukhara, Khiva and, of course, Tashkent, while in Kazakhstan they can begin from Turkestan, Shymkent, Taraz and finish in Almaty and Astana. They can also visit our national parks, such as Sairam-Ugam, Aksu-Dzhabagly and others, where we can ensure an unforgettable experience from an eco-tourism perspective,” he said in March.

Sacral tourism, including visits to sacred and religious sites, might also be attractive to tourists, according to Kuzembayev.

“In the long-term, this initiative will be proposed to our neighbours – Kyrgyzstan, Tajikistan and China,” he added.

European Bank for Reconstruction and Development (EBRD) President Suma Chakrabarti recently commended the Kazakh initiative saying it would be a “game changer for the region.”