By Aigerim Seisembayeva in International on 19 June 2018 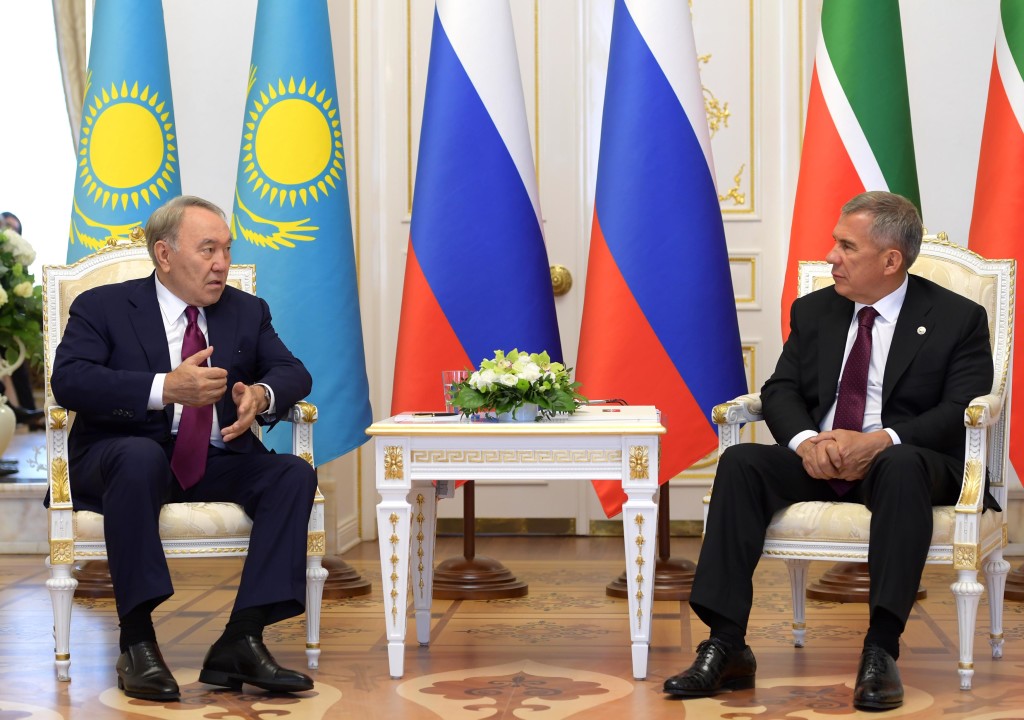 The Kazakh President also praised the close relationship and the importance of deepening trade, economic and investment cooperation.

“You have a good development in the IT sphere. Our youth needs to learn from your experience. Out interregional cooperation is also developing. Our mutual trade increased to $700 million, so now we need to reach $1 billion,” he said.

Nazarbayev noted the possibility of creating joint ventures in the machinery, defence and space industries and noted Tatarstan’s experience in oil refining.

“All countries will be switching to alternative energy sources. At the same time, in the next 50 years, oil and gas will also be in demand. Taking advantage of this time, we must create a manufacturing industry,” he said.

“We need to develop agricultural science. We can also supply meat to Russia. We brought the best breeds of cattle to Kazakhstan to produce high-quality beef,” said Nazarbayev.

He also briefed the Tatar president on efforts to develop Kazakhstan’s infrastructure and transit-transport potential. Cultural and humanitarian cooperation, including in education and healthcare, were also discussed.

“I am glad that Kazan is developing successfully. Tatarstan occupies one of the leading places in the context of our relations with Russia. We will develop further cooperation for the benefit of the two peoples,” Nazarbayev said.

Nazarbayev awarded Minnikhanov with the Dostyk (Friendship) Order of the first degree for his contribution to strengthening friendship, mutual understanding and trust between peoples.

“Kazakhstan is our most important partner. The experience of implementing successful joint projects is important,” said the President of Tatarstan.

Minnikhanov also noted the pace of the development of Kazakhstan’s education system and expressed desire to increase student exchanges.

He also praised the use of the EXPO 2017 campus to house the Astana International Financial Centre.

“The EXPO 2017 exhibition was held at the highest level. You have created a powerful and modern platform. I believe that the launch of the AIFC (Astana International Financial Centre) on the premises of this complex will be a notable event; in the future we want to work with our colleagues from Kazakhstan within the framework of the AIFC,” Minnikhanov said.

The Kazakh President also attended an exhibition of industrial enterprises and got acquainted with the plans for the revival of the city of Bolgar and the island-city of Sviyazhsk.