By Elya Altynsarina in International on 11 June 2018

ASTANA – President of Kazakhstan Nursultan Nazarbayev visited Beijing for a state visit to China on June 6-8. 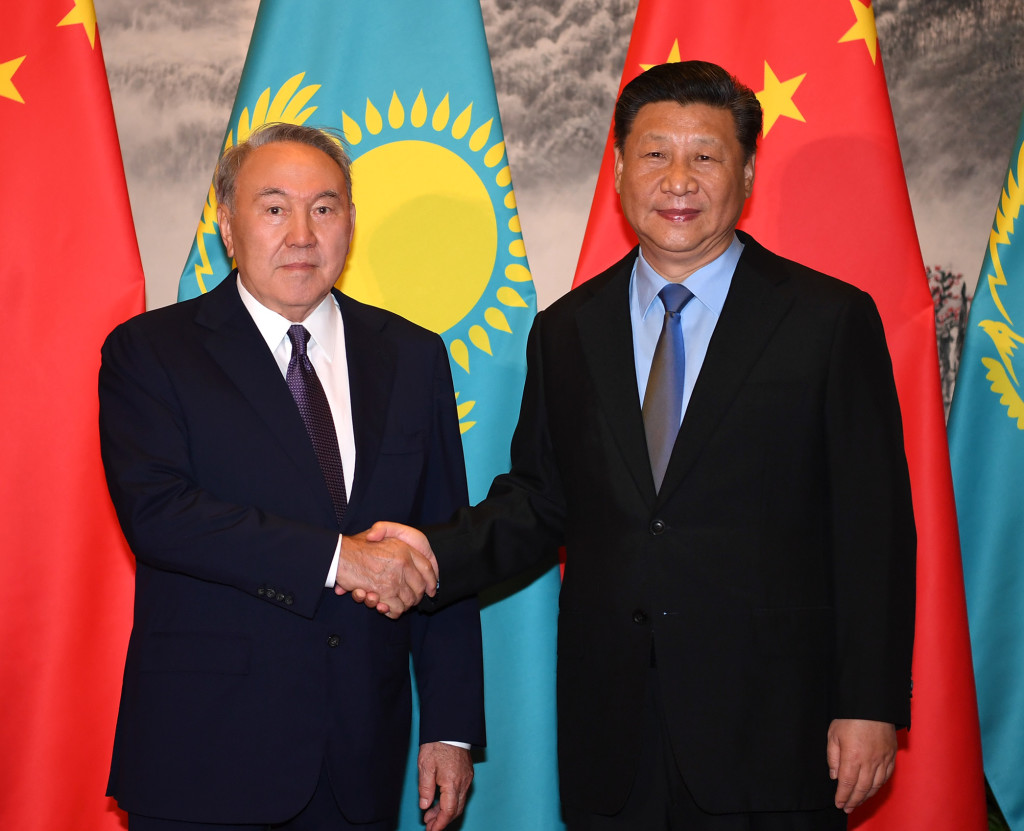 The relationship between Kazakhstan and China has grown increasingly close in recent years: since 2012, the two countries have seen 18 meetings at the highest level and signed 127 bilateral documents for a total of about $67 billion. The volume of mutual trade over the past year increased 30 percent to almost $11 billion.

In Beijing, Nazarbayev met with Chinese President Xi Jinping, Premier of the State Council Li Keqiang and Chairman of the Standing Committee of the National People’s Congress of China Li Zhanshu. The Kazakh President also led meetings of business circles of the two countries, and oversaw the signing of nine bilateral documents.

After the official welcoming ceremony on June 7, Nazarbayev congratulated Xi on his recent re-election and the successful 19th Congress of the Communist Party of China.

Nazarbayev commended Xi for his personal contribution to the development of positive neighbourly relations in the spirit of friendship, equality, mutual cooperation and respect for state sovereignty. “Our cooperation has been further strengthened within your initiative to build the New Silk Road Economic Belt,” Nazarbayev noted.

Xi responded that China was ready to work with Kazakhstan on “building the bright destiny of mankind by applying intellectual and physical efforts, and I am ready to work with you on steering the ship of Chinese-Kazakh friendship.”

He also agreed that bilateral relations and mutual trust between the two states have grown with the implementation of joint infrastructure initiatives, including the Belt and Road Initiative, one of many terms for China’s massive infrastructure investment project along the old Silk Road network and beyond.

According to the Akorda press service, during the talks the Chinese side expressed interest in buying ecologically clean agricultural products and the parties discussed deepening bilateral cooperation in energy, oil and gas, new technologies and digitisation, as well as advancing cultural and humanitarian ties.

Recalling the visit of Li Keqiang to Kazakhstan in December 2014, Nazarbayev told Li that his bold and interesting ideas launched joint industrial and investment programme between the two states, and led to 51 projects totalling $28 billion. Eleven of those are currently being implemented.

The next day, the Kazakh President met with Li Zhanshu.

“For our people, you are a great friend, and for me personally, you are one of the most respected statesmen. Under your leadership, Kazakhstan formed a market economy, the quality of life improved, and social stability was entrenched. The standing of Kazakhstan in the world and the region is constantly growing… as your friend and your neighbour, China is sincerely pleased with the successes of your country,” Li said.

Nazarbayev mentioned that China’s development path over the past 40 years has been marked by world-class achievements.

“China has become one of the largest and leading economies in the world. Innovations are rapidly introduced, investment in science is growing – your country has entered an entirely new phase of its development,” he added.

The Kazakh President later met with Chairman of the Board of CNPC Wang Yilin, one of the main partners of Kazakhstan in the production, transportation and deep processing of oil and gas.

“Over the years, more than 100 million tons of oil have been produced and we are ready to continue cooperation with your company, especially with regard to the use of the Kenkiyak-Atyrau pipeline to increase the oil supply to China and domestically,” said Nazarbayev, expressing overall satisfaction with the company’s results in Kazakhstan.

“We have the opportunities and the willingness to develop and work further,” Wang concurred. Meetings with Chinese and Kazakh business circles took up the last day of the trip.

The meeting of more than 300 business representatives resulted in the signing of about 40 commercial documents worth $13 billion. Within the industrialisation and investment cooperation, 51 projects were formed, equal to $28 billion.

Nazarbayev stressed in his remarks to business representatives the advantageous geopolitical location of Kazakhstan and the business opportunities it presents.

“Kazakhstan is a member of the Eurasian Economic Union, with more than 180 million people and with no [internal] customs borders. Five railway and six automobile international routes connecting China and other Asian countries with Europe through Russia, the Caspian and Black Seas, as well as Iran and Turkey go through Kazakhstan, which allows businesses to deliver goods to Europe from China via Kazakhstan in 15 days, while shipping by sea takes two to three times more time.”

He then underlined some pro-investment and business environment measures taken by Kazakhstan, such as the liberalisation of business legislation; the launch of the Council of Foreign Investors; the work of Kazakh Invest and Kazakh Export national companies; simplified processes for attracting foreign labour, obtaining licenses and signing subsurface use contracts; and tax incentives and preferences for participants of 11 special economic and 24 industrial zones.

“The state programme for the agro-industrial complex and the Digital Kazakhstan programme are implemented. We are considering putting our major national companies through initial public offerings on the stock exchanges of Hong Kong and Shanghai. Within the infrastructure of EXPO 2017, the Astana International Financial Centre has begun its work, and is intended to become a regional centre for the development of green, Islamic and innovative financial instruments. So I invite Chinese companies to take part in the implementation of these large-scale projects,” Nazarbayev said.

As part of the visit, Nazarbayev also met with the creative group of the first joint Kazakh-Chinese film, “Composer,” dedicated to the friendship of composers Bakhytzhan Baikadamov and Xi Xinghai, who lived in Almaty during the Second World War. The project was directed by Kazakhfilm in partnership with the Chinese companies Shinework Pictures and China Film Coproduction Corporation.

While in Beijing, Nazarbayev also laid flowers at the People’s Heroes Monument on Tiananmen Square, honouring the memory of the Chinese people who gave their lives for national liberation in the 19th and 20th centuries.