ASTANA – April 10 marked the 26th anniversary of diplomatic ties between Kazakhstan and Israel. Bilateral relations have been friendly and fruitful; however, economic cooperation can be expanded, said Deputy Director General and Head of the Euro-Asian Division of the Israeli Ministry of Foreign Affairs Alexander Ben-Zvi during his recent visit to Kazakhstan. 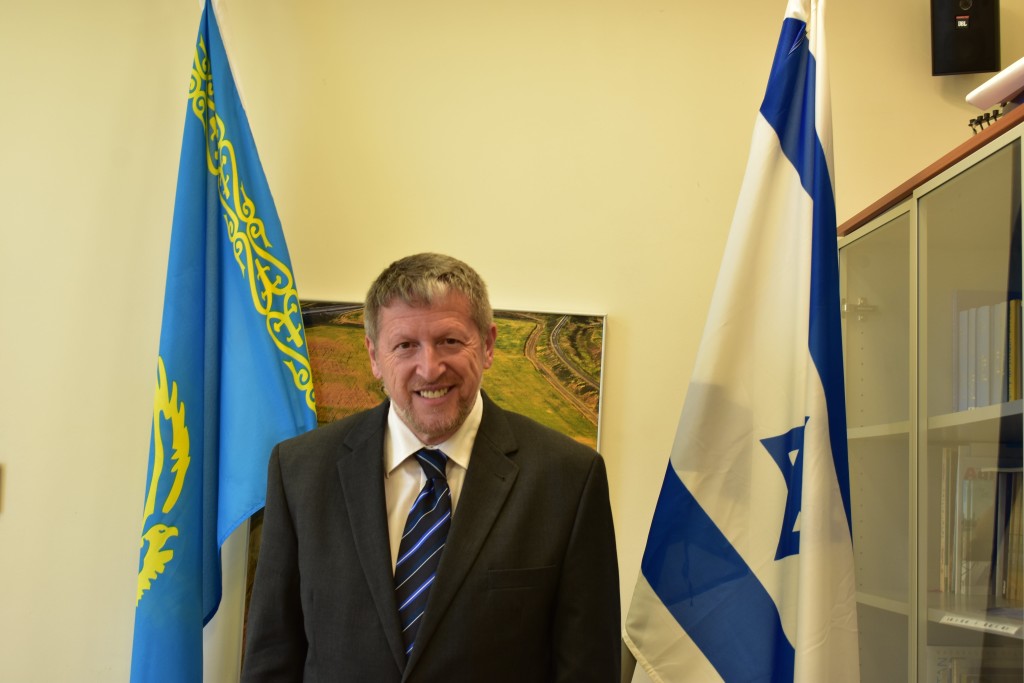 Deputy Director General and Head of the Euro-Asian Division of the Israeli Ministry of Foreign Affairs Alexander Ben-Zvi.

Kazakhstan is a secular state but culturally part of the Islamic world and a member of Organisation of Islamic Cooperation (OIC) since 1995. But this poses no obstacle to harmonious relations with Israel, he noted.

“Kazakhstan is not the only country we have relationships with in the region, and all of them are moderate Muslim countries. This fact has no influence on our excellent relations and I do not only mean five Central Asian countries, but also Azerbaijan, for example. For 26 years, we have had very good relations with Kazakhstan and we politically do not see any problems. Obviously, we do have sometimes a difference of opinions, but that is not an issue,” Ben-Zvi said.

However, economic cooperation between the two countries could be closer.

“If I had any kind of criticism, it would be because we do not have enough of economic relations. We buy energy resources from Kazakhstan; still, we need to think about other ways to increase our economic exchange. That is the point that we need to press in the future. Otherwise, Kazakhstan and Israel are in very good relations,” he added.

With science and technology being one of Israel’s most developed sectors, advances in medicine, education and agriculture are among priority areas for Kazakh-Israeli cooperation.

Every year around 60 Kazakh specialists visit Israel under the MASHAV training programme in fields such as agriculture, education, management, medicine and public health, rural and urban development.

“We are well known for our expertise in those fields and we work hard through the embassy to bring Kazakh specialists to Israel for an extensive programme of trainings. More than a thousand people have gone through the programme since its establishment, came back, applied the knowledge here and provided sound advice,” Ben-Zvi noted.

“The important thing is that we are not offering a model to copy; we are speaking about adapting our experience for local conditions, not adopting [it],” he added.

Currently, the two countries are negotiating issues of double taxation.

“I am in charge of our relations with the post-Soviet region and we have a practice of political dialogue with each country. During the visit, I met with Kazakh Ministry of Foreign Affairs officials to go through all the aspects of our bilateral relations and do a brush up after the intergovernmental commission meeting in Israel last year,” he said.

This year has been intensive and fruitful in terms of cultural exchange between Israel and Kazakhstan. Bands from Israel participated in an Almaty Jazz festival and the Israeli bands Quarter to Africa and Dudu Tassa & the Kuwaitis performed during the Spirit of Tengri festival. Also, the Israeli embassy organised a performance by Vertigo contemporary ballet troop at the Astana Ballet, which was not only dedicated to the celebration of 70 years of Israeli independence but also to the 20th anniversary of the Kazakh capital.