By Anuar Abdrakhmanov in Sports on 6 June 2018

ASTANA – Roman Grigorchuk, former manager of Latvia’s Ventspils, Ukraine’s Chernomorets and Azerbaijan’s Gabala, has now been appointed head coach of FC Astana.The Ukrainian has extensive experience working with clubs in the group stage of the Europa League, having taken three of his clubs there for a total of four showings. 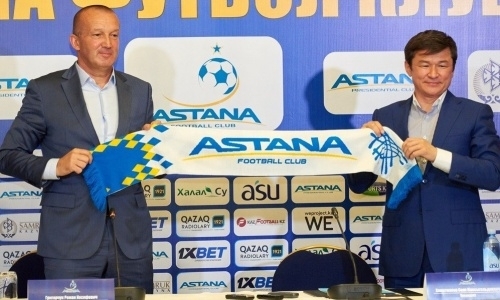 In the 2013 to 2014 season, he reached the round of 16 of the second major European tournament with Chernomorets. Grigorchuk has also won the Latvian championship three times and twice won the Latvian Cup. He has taken teams to silver and bronze medals in Azerbaijan’s championship and has been recognised as a coach of the year in all of three countries where he previously worked. FC Astana President Sayan Khamitzhanov, in announcing the club’s new manager, noted that former manager Stanimir Stoilov would now be heading Kazakhstan’s national football team, and that the agreement with Grigorchuk had been in the works for some time.

“Of course, we wanted him to arrive to us earlier, but he had a current contract with the club in Azerbaijan; therefore, the signing was postponed,” Khamitzhanov said. “Roman Grigorchuk is experienced. We have agreed with Grigori Babayan that he would permanently act as a coach until the arrival of a new coach. Gregori Konstantinovich continues working in the coaching staff of the club and will be Grigorchuk’s right hand. We hope that in Kazakhstan he will win many trophies. Grigorchuk is an ambitious coach. He aims to win championships and to perform successfully in European tournaments. We have signed a contract for two years.”

Grigorchuk said joining FC Astana would be a step forward for him.

“I am proud of being a coach of FC Astana,” he said. “As a result of their hard work, Astana is well known in European football. It places a responsibility on us. This club should have its victories. My work will be to reach them. It is a great pleasure that the media show interest.”

In response to questions, Grigorchuk said his goal was to win with Astana’s current players, who he called well-chosen.

As for joining the team without having spent pre-season training time with the players, he said, “all we need is to work.”

“FC Astana is at the level when the team sets great tasks. It is more important to have a match that will allow us to reach great results. On the other hand, I do not see any hardships. All we need is to work…  Nothing is perfect. There are moments that we need to improve. I only want to help Astana continue winning. It is certain that we will take steps to improve playing. My team and I should improve each day.”

As for taking a Kazakh team to the Champion’s League, he said, “I, of course, can say that I am ready, but does it change anything? In order to win, many things must coincide. Now, the task of making the Champions League is difficult, but it does not mean that we will not try. I like the way [Astana’s] footballers were selected. The coach can only recommend someone. Our decisions will be built upon this leadership.”

The challenges the team faces are, of course, travel times, he said, especially in the summer.  “It gets hard as there is a difficult schedule. Flights, scheduling problems are not easy. It is certain that the team should be full, so the coach can substitute [as he needs to].”