ASTANA – The Astana International Financial Centre (AIFC) has performed a pioneering role, said its legal advisory council (LAC) chairperson Michael Blair. In an interview with The Astana Times, he discussed the council’s operation, his commitment to the centre’s activity and its distinctive features. 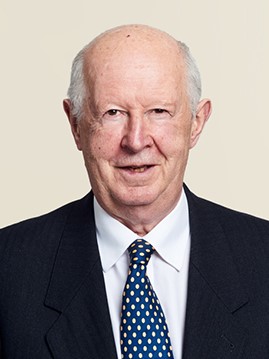 Blair noted he strives to comment in writing as early as possible on the proposals to be considered, allowing fellow LAC members to offer their own opinions knowing his stance. He also gives his viewpoint on the comments of others and chairs informal subgroups dealing with issues arising in meetings which require additional consideration.

As one of the principal lawyers involved in the design and construction of the Dubai Financial Services Authority and the commercial legal system pioneered in the Dubai International Financial Centre (DIFC), Blair brings unique experience to the AIFC.

“Also useful is my earlier experience inside the U.K. regulatory system from 1987-2000 in the development and reform of financial services regulation. My earlier experience from 1971-1982 in the field of commercial law reform has also been of value. These three areas of experience have equipped me to offer informed comment and advice over a wide field of law and regulation of central importance to the development of the AIFC,” he said.

Blair noted the LAC chairpersonship has two distinct features and provided an explanation of his role.

“First, the LAC itself has not been able to rely on precedent as much as the other international financial centres. The older centres such as Hong Kong, Singapore, the UK Channel Islands, Dublin and others did not develop as separate units within a state with their own bespoke, commercial and financial services laws. They grew to prominence as commercial centres applying the general law of the state or in the case of Hong Kong, the general legal system as a whole was retained even when the city returned to China,” he said.

“The newer ones, like Dubai, Qatar and Abu Dhabi, developed a special commercial and financial legal system alongside the new regulatory structure with their own courts, etc. However, each of them did so without the benefit of any external advisory council for commercial law drawn from international commercial and legal expertise. So, the AIFC has performed a pioneering role and the way I have chaired it and continue to chair it is also, therefore, a pioneering challenge,” he said.

“Secondly, the imaginative design of the AIFC itself is another unique feature affecting my role. The AIFC has a relatively large geographical boundary and is therefore, legally speaking, a territory within Kazakhstan with its own legislative capacity. However, the constitutional ability to legislate in relation to the AIFC is not one based on a ‘hard border,’ in the sense that the laws apply to everyone inside the territory and to no one outside. Nor is it based on personal jurisdiction only, in the sense that only members of a special community are governed by a set of special laws,” Blair explained.

“Instead, it is an imaginative mix of both these concepts. The AIFC laws apply [not only] to the centre participants who are located in or specially permitted to operate in the physical area of the centre, but [to those] who can operate in that capacity within the wider territory of Kazakhstan. Further, the physical area is not exclusive; commercial enterprises operating within the border of the centre are not required to be centre participants and they can therefore carry on banking or financial services business, etc. inside the boundary of the AIFC as if the AIFC did not exist at all,” he noted.

“In essence, therefore, if the DIFC in Dubai is a legal ‘enclave’ and if Sharía law is based on personal adherence, the AIFC has elements of both of these. The special legal system applies to voluntary adherents who have to be based in or permitted to do business in the territory, but others can do business in the territory without becoming adherents. Those others remain subject to the law of Kazakhstan,” Blair noted.

“This design will now be tested in the next period, but members of the LAC and I, having taken some time to absorb the implications of the structure, are hopeful that it will work extremely well,” added Blair.